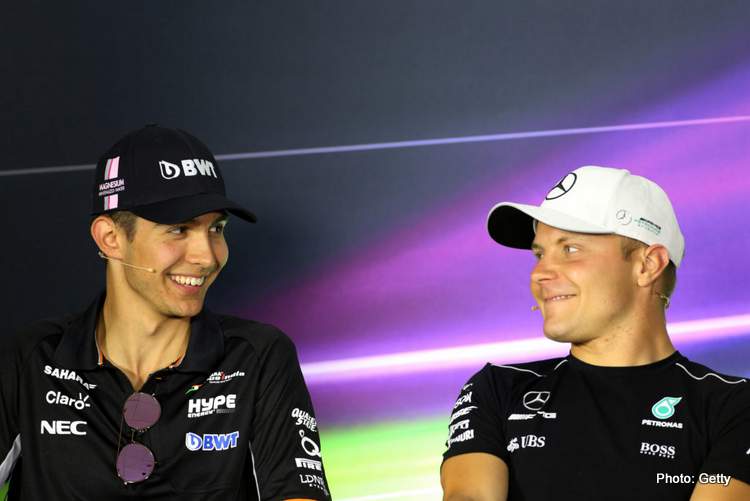 Esteban Ocon and Valtteri Bottas will make their virtual Formula 1 debuts in this weekend’s Monaco Grand Prix, joining six other F1 drivers in the field.

Adding Ocon and Bottas to those six other drivers — Alex Albon, Antonio Giovinazzi, George Russell, Nicholas Latifi, Lando Norris and Charles Leclerc — means Formula 1 will have its largest current-F1-driver contingent so far, in what is the series’ fifth race.

The elite line up will also be joined by Arsenal’s Premier League star Pierre-Emerick Aubameyang, who will race alongside Lando Norris for McLaren. Belgian international goalkeeper, Thibaut Courtois also returns for Alfa Romeo following his 11th place finish in the Virtual Spanish GP. Elsewhere on the grid, Alex Albon – who was victorious at the Interlagos Circuit – will be partnered by big-wave surfer Kai Lenny for Red Bull Racing and Latin American singer Luis Fonsi will also make his Virtual Grand Prix debut for Racing Point.

Sunday’s race will fall on the weekend originally scheduled for the Monaco Grand Prix and will take place at the virtual version of the Circuit de Monaco. Drivers will join the race remotely, with a host broadcast live from the Gfinity Esports Arena from 6:00pm (BST) on Sunday May 24.

The live broadcast, which is available on the official Formula 1 YouTube, Twitch and Facebook channels as well as Weibo and Huya channels in China, is expected to run for 1 hour 30 minutes. A qualifying period where grid positions will be determined based on the drivers’ fastest lap time will be followed by a 39-lap race. The Virtual Grand Prix will also be shown live with international broadcast partners in over 100 countries including in the UK on Sky Sports, in the US on ESPN, and FOX Sports Asia across Southeast Asia. Across the five races to date the Virtual Grand Prix series has delivered over 20m views across linear TV and digital channels.

The F1 Esports Pro Exhibition race will precede the Virtual Grand Prix and is set to begin at 5:00pm (BST). The broadcast will be available on the official Formula 1 YouTube, Twitch and Facebook channels as well as selected TV broadcasters and is expected to run for 1 hour. The Formula 2 Virtual Racing event, featuring F2 and F3 drivers, will also be live on the official Formula 1 YouTube and Twitch channels and TV broadcast partners from 4:00pm (BST).

Julian Tan, Head of Digital Business Initiatives and Esports said:
“The Virtual Grand Prix series has proven to be a fantastic live spectacle with over 20m viewers to date, providing fans with some racing entertainment during these challenging times. We are delighted to announce our strongest line-up of current F1 drivers alongside a star-studded list of global talent from the worlds of sport and entertainment, as we all stand together to put on great racing entertainment around the historic streets of Monaco, virtually.”