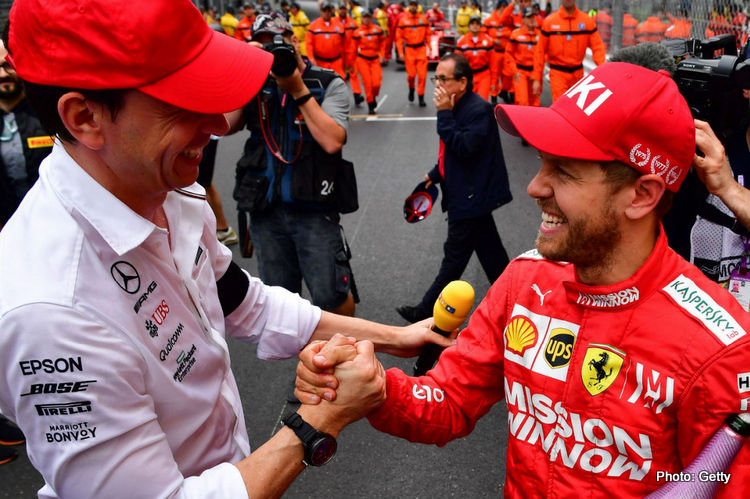 Mercedes Formula 1 boss Toto Wolff has conceded that there is the possibility of a switch by Sebastian Vettel to the Silver Arrows, but his focus remains on the drivers currently in his stable.

Without a seat for 2021 after he and Ferrari agreed to part ways last week, it has been speculated that Vettel could make the move to Mercedes with both Lewis Hamilton and Valtteri Bottas at the end of their contracts after the 2020 season.

Furthermore Wolff, who said on Tuesday regarding Vettel that “we must take this development into consideration”, admits that there is some sense to the notion.

“Of course a German driver in a German car is a good marketing story,” he told Austrian broadcaster ORF. “At Mercedes, however, we are purely focused on success, but Sebastian is of course someone who is really good.”

However, Wolff went on to clarify that he was simply considering all the possibilities, and even in the event Bottas or Hamilton departed, Vettel would probably not be the first call.

“That’s why we’re asking ourselves what we’re going to do with George Russell, and the Vettel option is of course also on the table. But that’s not first on the agenda at the moment, because we want to concentrate on our current drivers first.”

Regardless of which path he chooses, the Austrian says he would not go down the same one as Ferrari in jettisoning a current driver before the season.

“We’re certainly not putting ourselves in that position. It’s a bit difficult to manage when you’re driving one year with a driver who will be in a rival team next year. What do you do with innovation and learning when you know that a driver can use that against you next year?

“That’s why all the teams that have announced this hastily are in a difficult situation that we don’t want to get into.”

In any case, Wolff believes that Vettel will find a spot on the grid if he wants it.

“Sebastian is pulling all the strings. He can decide for himself whether he wants to quit or join another team. There are still some interesting places to go.”