Outside Line: Carlos and Daniel make their moves 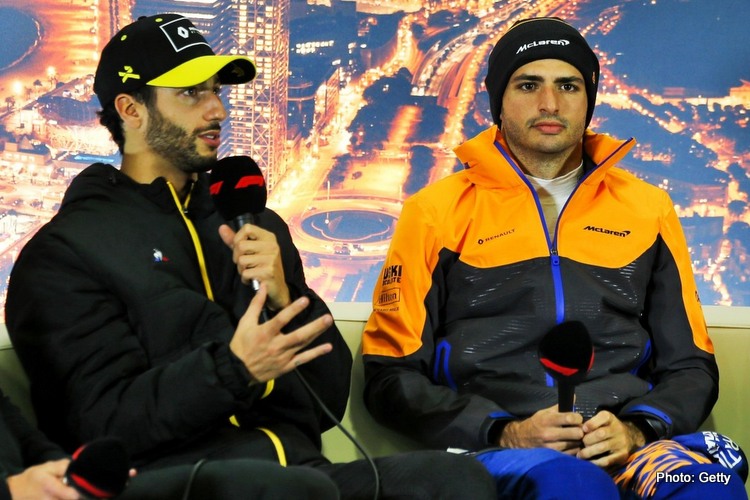 And now the pieces have officially fallen into place: Carlos Sainz to Ferrari, Daniel Ricciardo to McLaren.

Not exactly the best-kept secrets over the past 24 hours, these two moves nevertheless represent a seismic shift in the career trajectories of Sainz and Ricciardo, as well as Formula 1 itself.

Firstly for Sainz, it represents an incredible turnaround. Unable to find his place at Red Bull (or maybe just play nice with Max Verstappen), he was cast adrift to Renault and then basically helped out the door when Ricciardo himself became available in 2018. Now he gets to drive for the most famous name in racing, and is likely to join the F1 race-winner’s club before long.

At the same time, the Scuderia’s signing of Sainz over Ricciardo would seem to indicate the Charles Leclerc era has officially begun. Regardless of how Sainz performs moving forward, we can assume he was brought there to support the incumbent, not challenge him — although that’s what many assumed a year ago with Leclerc, too…

On the other side of the coin, the story of Ricciardo just gets more intriguing. He shocked the world when he abandoned Red Bull for Renault two years ago, and yet now he has officially pulled-the-plug on that experiment, opting instead for greener, more competent pastures.

Sold as Ricciardo was by Cyril Abiteboul on the promise of Renault’s works project, it was clear after just one season that the French constructor was years away from delivering, if ever. And while the open seat at Ferrari and (potentially) Mercedes mean this is probably not the move most of the Aussie’s fans hoped for, it’s hard to see him doing much better.

Indeed, where just getting such a seat represents a win for Sainz, for Ricciardo to sign with Ferrari would’ve meant him finding himself in the same situation he had before escaping Red Bull — going up against a golden goose who demanded the lion’s share of the attention. In contrast to the Spaniard, the Aussie has done enough where we know for a fact he’s better than being a number two, and at soon-to-be 31, he does not have time on his side to faff about and prove himself all over again.

Thankfully for him, that clearly won’t be the case at Woking. Lando Norris certainly impressed in his rookie season in 2019, but he was comfortably beaten by Sainz. Of course you would expect the young Briton to keep improving, but at least for now Ricciardo won’t have to worry about intra-team politics, and in fact might find himself as an F1 team’s clear-cut number one driver.

More importantly, he now joins the team that spent the past year beating his current team (and McLaren’s engine suppliers) at their own game. Factor in the impending Mercedes engine switch and it looks like if any team is ready to make the leap from the midfield to race winners in the near future, it has to be McLaren.

At the same time, it’s worth bearing in mind that for both drivers, things can change rapidly in F1. What looks good today may look ill-advised tomorrow. What if Sainz struggles as Ferrari fall short in their quest for another championship? They certainly don’t have a shortage of wingmen to pick from. And what guarantee is there for Ricciardo that McLaren will continue its upward trajectory? And can they ever expect to contend with customer engines? Or maybe Renault leapfrogs them courtesy of the groundwork Pat Fry has only just started to lay down? What today looks like a win-win might tomorrow be a lose-lose, we just don’t know.

In any case, the good news is that F1 continues to be as fascinating off-track as it is exciting on — now, if only we can get back to the latter…