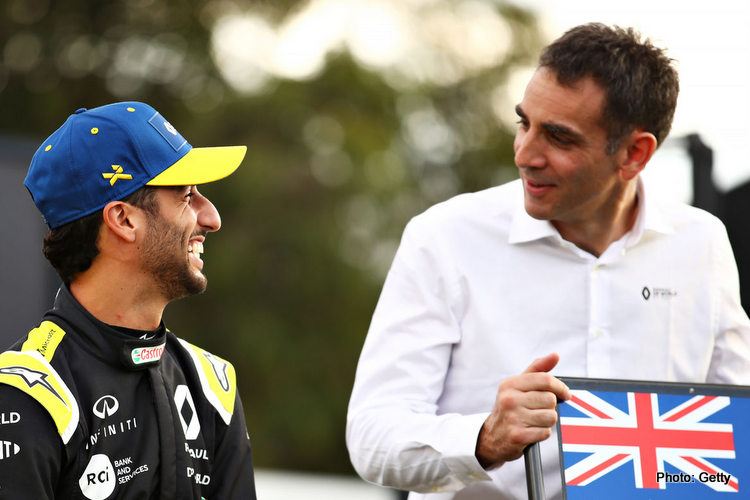 Renault boss Cyril Abiteboul has directed some veiled criticism at his soon-to-be-departing driver Daniel Ricciardo, implying the Australian did not reciprocate the team’s values in his decision to leave the team.

Commenting on Ricciardo’s impending move to McLaren in Renault’s press release, Abiteboul managed to express his displeasure with the Australian’s decision without mentioning him by name.

“In our sport, and particularly within the current extraordinary situation, reciprocated confidence, unity and commitment are, more than ever, critical values for a works team,” Abiteboul said.

“I am confident that the 2020 season will allow us to accomplish even more together. Our ambitions and the strategy of Renault DP World F1 Team remain unchanged.”

Leaving Red Bull for the Enstone outfit after the 2018 season, it was seen as a major coup when Abiteboul signed the Australian, who was seemingly swayed by the Frenchman’s promises the team could return to championship contention in the near future.

Instead, Renault went from fourth in the 2018 constructor’s standings to fifth in 2019, leapfrogged by engine customers McLaren who under the new leadership of Andreas Seidl have gone from strength-to-strength.

Evidently Ricciardo, who stated earlier in the year that Renault have “got to deliver something better for me”, no longer shared Abiteboul’s vision and took the first opportunity to jump ship.

At the same time, Abiteboul has maintained he has other options than the Australian, although his first choice was to re-sign him.

With that no-longer happening and Abiteboul’s response, the 2020 season (assuming it gets under way) could see an an awkward few months in the Renault garage.