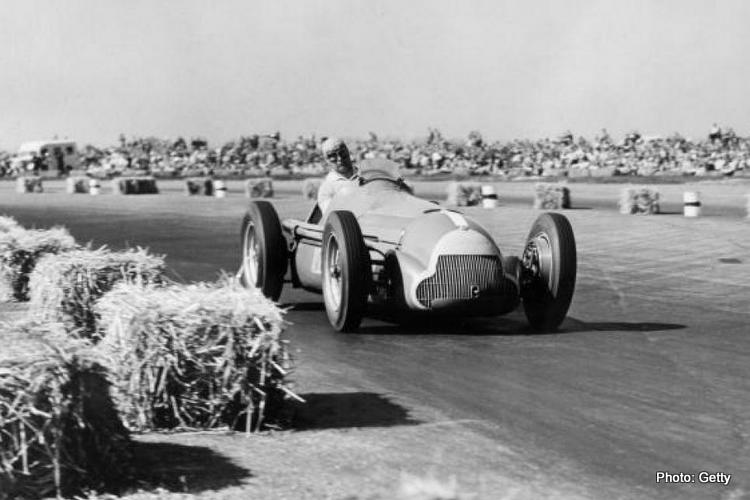 Nino Farina led an Alfa Romeo 158 rout to win the first ever Formula 1 Grand Prix off pole position at Silverstone in 1950 from Luigi Fagioli and local hero Reg Parnell. While the British like to tell you it was the British Grand Prix, the race was officially known as Grand Prix d’Europe, while the new World Championship was virtually ignored by the media and considered a farce by ‘racing purists’…

13 May was also a busy day from there on this day in F1 – Stirling Moss won the 1956 Monaco GP driving a Maserati 250F from Juan Manuel Fangio, who took over teammate Peter Collins Ferrari and Jean Behra in another Maserati. 23 years later, Jody Scheckter’s Ferrari 312 T4 came from seventh on the grid to win the ‘79 Belgian Grand Prix from Jacques Laffite in a Ligier and Didier Pironi’s Tyrrell.

In one of modern F1’s biggest upsets, Venezuelan underdog Pastor Maldonado’s Williams-Renault inherited pole when Lewis Hamilton was penalised, and went on to win Williams’ most recent and also first GP win in 12 years from Fernando Alonso’s Ferrari and Kimi Räikkönen in a Lotus-Renault. Lewis Hamilton and Valtteri Bottas’ 2018 Spanish Mercedes 1-2 over Sebastian Vettel’s Ferrari was a far more conventional result.

In other news on the day that South African F1 racer Paddy Driver and sportscar driver Jean Rondeau were born, Mark Donohue cracked the first sub-50 second, or 180 mph lap in qualifying for the 1971 Indianapolis 500.