A Beginner’s Guide To eRacing 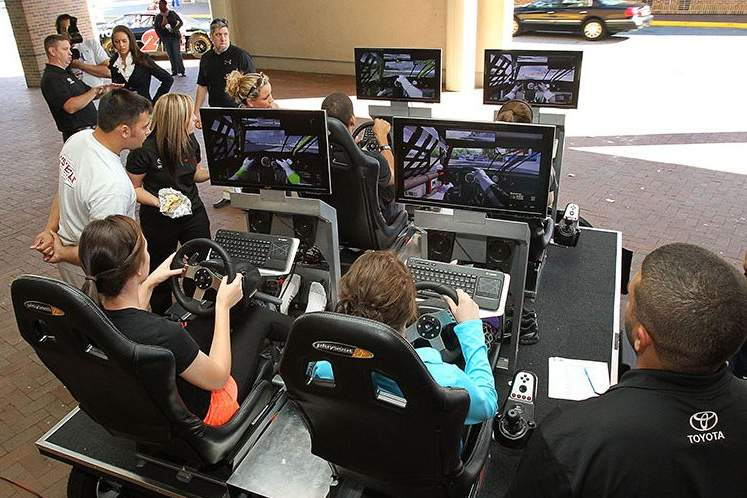 There is still hope that seven of these cancelled events can be rescheduled for later in the season, but three of them have already been cancelled indefinitely.

However, fans that are looking to get their fix of motor sport action shouldn’t look past the emerging sport of eRacing, part of a global esports industry which is reported to be worth over $1 billion. According to Thomas Bush from FPSBible.com, eRacing is “as simple as hooking up a USB steering wheel and pedals to your computer before hitting the digital tarmac”.

The virtual action has already been getting attention from our own site, with Sebastien Vettel and Jenson Button getting involved in the Legend’s Trophy at the beginning of May and one can even bet on the winners of various races at some online sportsbooks whilst we wait to hear the news of when Formula 1 will return to our screens.

Simply put, eRacing is a form of eSports, where players compete against each other in a simulator. They will control their own drivers and compete against the rest of the field to finish in pole position.

The official series by F1 was revealed at the end of March, and is known as ‘F1 eSports Virtual Grand Prix series’. The organisers wanted to ensure that fans still had something to keep their mind on while the action wasn’t taking place in real-life, and it has already been a huge success.

These races will take place every weekend that there was meant to be a Grand Prix. Fans have already been gripped by the series as they have watched Renault driver Guanye Zhou win the inaugural event at the Virtual Bahrain Grand Prix. All of the races are made up of a mixture of professional players, professional drivers and celebrities.

The winners aren’t always the gamers either, as Charles Leclerc won an event in April and added success in the Virtual Chinese Grand Prix on April 20th.

There are a growing number of celebrities that are getting involved in the action on the track, with Real Madrid goalkeeper Thibaut Courtois competing in the recent Virtual Chinese Grand Prix. England cricket star Ben Stokes also got involved in the recent Virtual Australian Grand Prix. These virtual events will be the best F1 action that fans can get before the action finally resumes.

How Does It Work?

All players will be playing remotely from the comfort of their own home. However, there will be a host for the broadcast, and they will be live from Gfinity eSports Arena. The game is played on the F1 2019 PC game, which was developed by Codemasters. The same developer has recently given fans an insight into the upcoming F1 2020 game.

These virtual events are also not a full-length race as the majority of them are competed over half the number of real laps, with the Bahrain event being contested over 28 laps. There are also different configurations used to ensure that the celebrities involved are able to compete.

The settings for each player will be determined by the organisers, with the skill level of the player taken into account to weigh out the field to ensure that the race is more dramatic and entertaining for the viewers.

That means that some of the celebrities taking part will get fixed setups, optional anti-lock brakes and reduced vehicle damage. Like all F1 events, there will also be a qualifying competition, with drivers participating in a time trial. The fastest times will start higher up on the grid, while those with the slower times will be further back.

There are a number of ways to watch the action, with streaming available on YouTube and Facebook. The races only run for an hour and a half. It is also important to note that these virtual races are purely for entertainment, which means that there are no official World Championship points on offer for the drivers that are playing.

The addition of the virtual grand prix has been a welcome sight for motor racing fans around the world, as it has given those that usually look forward to the live action something to look ahead to. The event will continue to take place while there are events cancelled, which means that there will always be something F1 related to look forward to.

Meanwhile, the crossover of celebrities will ensure that it will appeal to those that aren’t necessarily the biggest F1 fan. With a Real Madrid footballer and cricketing superstar already having taken part, the door is certainly open for more global stars to try their luck against the best that the F1 has to offer.

While it isn’t exactly the racing that fans would have been hoping to watch, it does offer an interesting watch for those that still want their weekends to be fuelled by sounds of Formula 1 cars.