Norris: Pagenoud got a bit ‘salty’ 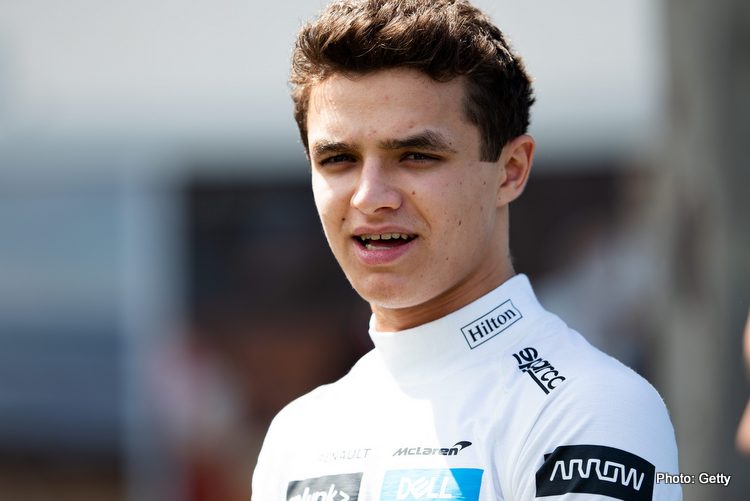 A virtual collision between McLaren’s Lando Norris and Indianapolis 500 winner Simon Pagenaud has triggered real controversy and highlighted how seriously drivers are taking their esports racing during the COVID-19 shutdown.

While there is plenty of light-hearted fun in the digital world, with Ferrari’s Charles Leclerc playing Fortnite in a banana costume and racing trucks and lawnmowers from his simulator, the competitive spirit is for real.

Norris, winner of last weekend’s IndyCar iRacing Challenge race on a virtual Circuit of the Americas, criticised Pagenaud on Saturday after they raced online at the famed Indianapolis Brickyard.

The 20-year-old Briton had been leading with two laps to go when he hit Pagenaud’s slow-moving car.

The Team Penske driver, who had been heard to say “we take out Lando, let’s do it” on his live stream, later explained he had only meant to help IndyCar driver Oliver Askew, also driving for the McLaren team, to win.

An earlier move by Norris had forced Graham Rahal into evasive action, hitting Pagenaud’s car and taking him out of contention.

Norris and Pagenaud spoke afterwards over the internet and the Briton told viewers on his Twitch stream that the IndyCar driver, whose words were inaudible, had apologised.

The Formula 1 driver, who had spent hours perfecting the technique needed to race on an anti-clockwise oval, was clearly still annoyed.

“I must have spent like a day doing that in total, like 24 hours I reckon I’ve spent driving in a straight line and turning left and trying to perfect it.

“With the most delicate touch, I’ve tried doing it fricking one-handed, doing it with my knee. 24 Hours.

“And then because that guy gets a bit salty that a non-IndyCar driver is about to win an Indy race…it just ruins it,” he said.

Askew was taken out by Santino Ferrucci, a former Haas F1 development driver, just before the finish.

Norris, a passionate gamer with 1.4 million followers on Instagram and tens of thousands following his esports racing, was not the only one to be upset.

“Not what you expect from a champion,” commented McLaren boss Zak Brown on Twitter in response to coverage of the incident.

Norris took issue with those who said esports, a big business with television deals and a vast global audience, was not real racing.

“Maybe some people aren’t taking it seriously, they just think ‘Oh, it’s a game, it doesn’t matter’,” he said.