Pagenaud does the double to win iRacing Indycar at Motegi 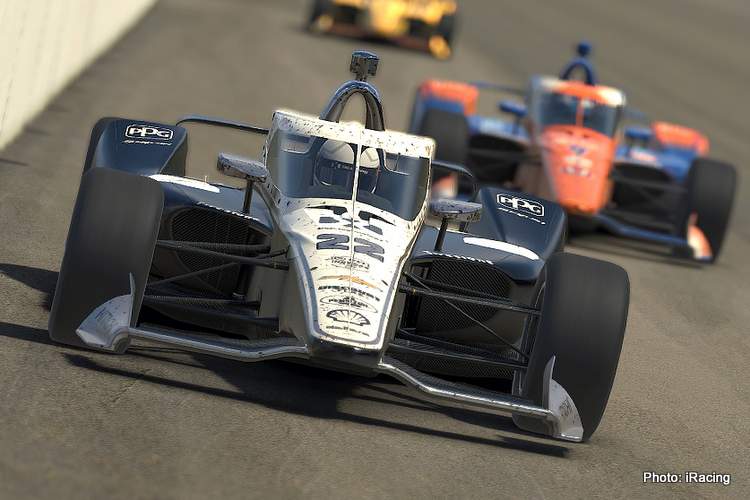 A second straight victory in virtual racing for Simon Pagenaud and Team Penske, and tempers were hot at the end of this one, as, the reigning Indianapolis 500 winner, competed in his firesuit and captured IndyCar’s race Saturday at a simulated Twin Ring Motegi in Japan. A frantic final 10 laps decided the iRacing event.

Essentially, Penske drivers Will Power and Scott McLaughlin were racing each ot her for the lead — and probably the win — when they came upon the lapped car of Oliver Askew that caused Power to touch McLaughlin’s car.

McLaughlin, the V8 SuperCars champion and winner of the virtual race three weeks ago at Barber Motorsports Park, was sent spinning into the wall and out of contention.

The Australian was livid and actively trying to calm himself on his simulator in Brisbane, where he awakened at 2 a.m. to prep for the series.

Pagenaud then raced Power wheel-to-wheel and the cars appeared to touch before Pagenaud took the lead. He still had to hold off Scott Dixon’s last-lap attempt to pass him for the win.

“It was very hectic with Will at one point and then Dixon at the end,” Pagenuad said. “I work hard all week to be competitive and I think I’m getting there.”

Pagenaud also won last week at virtual Michigan International Speedway, and along with McLaughlin’s victory the Penske drivers have won three of the four IndyCar iRaces.

Pagenaud slowed after taking the checkered flag and Dixon ran into the back of his car — contact that sent him spinning into the lapped car of Helio Castroneves. Both Dixon and Castroneves went virtually airborne after the finish.

IndyCar raced at virtual Twin Ring Motegi, a track the series last visited in 2011 but was selected in a fan vote as the circuit for the fourth round of the iRacing Series started when sports were shutdown because of the coronavirus pandemic.

Kyle Busch, who has made no secret of his desire to race in the Indianapolis 500, made his IndyCar debut virtually via a league invitation extended to the two-time and reigning NASCAR champion. Busch finished 13th — better than any finish yet in the NASCAR virtual races. He’s a newcomer to iRacing but quickly improving on his simulator.

“Look at all the fans in the stands. They are here to watch Sato,” Tracy cracked.

Robert Wickens started on the pole after a qualifying s ession, and James Hinchcliffe’s iRacing struggles continued when technical difficulties knocked him out of yet another race despite logging many hours on his simulator.

“A glitch kicked me out of today’s race!” he posted on Twitter. “Super bummed because practice had gone well and thought we could have had a good one. Using my newfound free time to actually go outside. See sun. Breath fresh air.”

Some thoughts on today’s #IndyCar Challenge at @motegi_english… I know this is the virtual world but the win sure feels real! Amazing competition today, and you can rewatch our streams at links below:
FB: https://t.co/W90qTYm70O
YouTube: https://t.co/oJoaCUF2HW pic.twitter.com/kPJn61PFsx