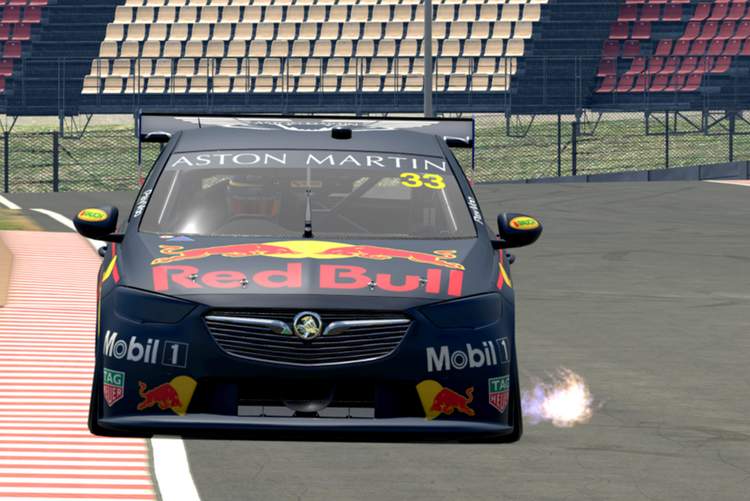 Red Bull F1 driver, like us all on lockdown, Max Verstappen recorded three podiums from four races in a standout debut performance in today’s second round of the Australian Supercars All-Stars Eseries.

With all major sporting events on hold, the Australian Supercars Series is currently producing one of the world’s most exciting Esports championships and for the first time a wildcard was invited to join the second round – our very own Max Verstappen. Max was invited to drive a Red Bull Holden alongside Shane van Gisbergen and Jamie Whincup. Shane and Max regularly race online together – and the duo did not disappoint.

Qualifying an impressive sixth for the opening race at Silverstone, Max crossed the finish line in P2. The second race at Silverstone, which was reverse-grid, had carnage written all over it. Starting P25, Max was unfortunate to get caught up in a first lap pile-up and finished in P18.

The third race, held at Spain’s Circuit de Barcelona, saw Max charge from P6 on the grid to P2, behind teammate and race winner Shane Van Gisbergen. Our flying Dutchman started the fourth and final race at Barcelona from fifth position, and after a brief spell leading the race, Max slotted in behind Shane claiming second place and his third podium of the day.

It was clear Max had enjoyed his Supercars debut, commenting “It was a lot of fun driving in the Supercar races and very hectic. We got some good results in the end as well which I didn’t expect. To be second three times is not bad at all and to be 1-2 for Red Bull twice with Shane is really good.

We worked really well together, especially in the final race with the strategy as he pitted a bit later and had better tyres at the end which helped us keep the 1-2. I want to say a big thank you Supercars for letting me drive in the series and also to Red Bull for organising this and the very cool livery. Hopefully I can be back soon for some more action.”

Max’s teammate and Supercars star, Shane, added: “Round two of the Eseries was really cool and it was awesome to get my first race win for the series tonight. I was finally able to have a night clear of any carnage compared to last week but was glad to get through all four races without any incidents and managed to get four great results which was nice.

“Working with Max was also great, we managed to get some practise laps together before the races started which obviously helped us at both Silverstone & Barcelona, and it was cool communicating with him throughout the race. I was fortunate enough to also win $1000 for my designated charity, Wings for Life – a Red Bull charity, which is a fantastic cause and an even better initiative by Supercars for the round winner.”

Post race interview with @Max33Verstappen after a successful @Supercars debut! 👊Would you like to see him race again? #VASC pic.twitter.com/YqVVJQKzMX