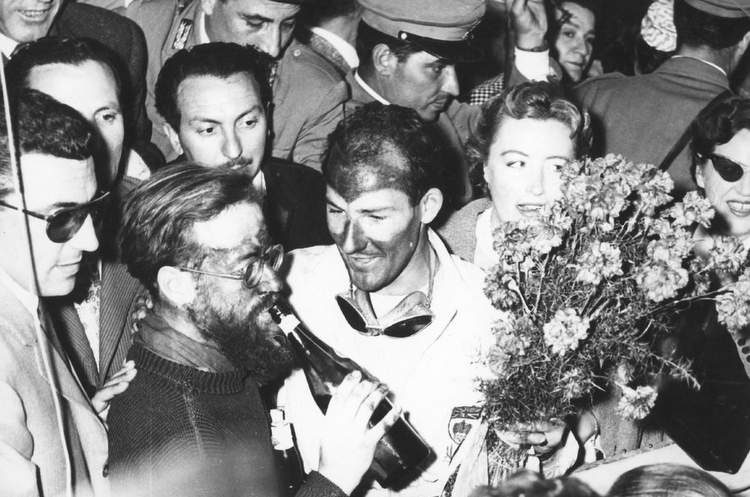 Tributes from around the motorsport world have poured-in for Sir Stirling Moss, who died on Sunday at the age of 90.

Below is a compilation of messages honouring Moss, and the indelible mark he left on Formula 1:

Lewis Hamilton:
“Today we say goodbye to Sir Stirling Moss, the racing legend. I think it’s important that we celebrate his incredible life and the great man he was. Saying goodbye is never easy and can be sad but he will always be here, in our memories and will always be such a huge part of British Motorsports Heritage. I certainly will miss our conversations. To be honest, it was such a unusual pairing, our friendship. Two people from massively different times and backgrounds but we clicked and ultimately found that the love for racing we both shared made us comrades. I am truly grateful to have had these special moments with him. Sending my prayers and thoughts to his family. May he rest in peace”

George Russell:
“RIP Sir Stirling Moss. Only had the pleasure of meeting him briefly a couple of times but even that was enough to understand why he was so highly respected. My thoughts are with his family.”

Esteban Ocon:
“He was one of the greatest, very sad day RIP Mr Moss”

Carlos Sainz:
“Very sad to learn Sir Stirling Moss has passed away. A true racer and a great example for all of us. RIP”

Kevin Magnussen:
“Today a great great man has passed away. Sir Stirling Moss to me is the definition of a real racer. I’ve always been a massive fan of Stirling and I once asked a friend of mine who knew Stirling if he could get me his autograph. He came back to me and told me that he’d spoken to Stirling and he would be glad to see me at his home in Mayfair. So I not only got Stirling’s autograph but I got to spend a day with Stirling and his lovely wife, Lady Moss. Sterling lived a life that I can only dream of. His legacy will live on forever. Rest In Peace legend.”

Mario Andretti:
“Just heard the very sad news my dear friend Stirling Moss has died. He was my hero and such a kind man beloved by everyone. He was a true giant in our sport and will be missed forever. My deepest sympathy to his devoted wife Suzie. Rest in peace, Racer.”

Damon Hill:
“He became the icon, the poster boy if you like, for British Grand Prix drivers, right from the very beginning of the post-war period of motor racing. I think he launched all the other careers of British racing drivers who went on to become world champions of which he sadly was denied. But I think no one ever regarded him as anything less than one of the greats.”

Sir Jackie Stewart:
“The passing of Stirling Moss is an enormous loss to the world of motorsport. He was the most dynamic, most charismatic racing driver I think that there has ever been. He walked like a racing driver, he talked like a racing driver, and he looked like a racing driver. And of course he never did win the world championship, only because he always wanted to drive a British car, and at that time the Italians and the Germans were all-powerful. Really for me, he was my ultimate hero. He just did the right thing the right way, and carried the sport and Britain in a very majestic fashion. To Susie I send my deepest sympathy. I went to see Stirling over the last two-or-three years on a regular basis, it’s a terrible loss for the sport, and also for me and my family.”

Paul di Resta:
“RIP Sir Stirling Moss, what a legend. Has to be one of the kindest men I have ever met. A true ambassador of our sport, I was lucky enough to be working at some great events with the man over the years. I will always be a big fan.”

Jean Todt:
“Very sad day. Stirling Moss left us after a long fight. He was a true legend in motor sport and he will remain so forever. My thoughts go out to his wife Suzie, his family, his friends”

Piero Ferrari:
“Stirling Moss symbolised motor sport. He was a true personality who left an indelible impression on the history of racing. His versatility meant he was able to win in so many different categories, from Formula 1 to sports car endurance races. He also produced incredible performances in road races such as the Mille Miglia, setting a record that was never beaten.

Despite not winning the Formula 1 World Championship, he is most definitely a legendary figure and he was a fearsome and formidable rival of Ferrari in Formula 1 and many other categories. His and Ferrari’s paths were about to merge when he had the accident at Goodwood in April 1962 that effectively ended his racing career, at least at a high level. At the time, in Maranello we were preparing a 250 SWB for him in British Racing Green, along with a contract to drive for us, but fate decreed otherwise.

My father said that Stirling reminded him of Tazio Nuvolari, because of his love of racing in any type of car, something which stayed with him right to the very end of his career.”

Zak Brown:
“Saddened to read of the passing of Sir Stirling Moss. A Formula 1 great, versatile racer and incredible ambassador for British and international motorsport. My respects and sympathies to his loved ones.”

Christian Horner:
“Very sad to hear the news of Stirling’s passing today. One of the greatest drivers of all time and undoubtedly would have been a very worthy World Champion. He was one of the great characters of the sport with tremendous wit and always a twinkle in his eye. We will miss you but I’m grateful to have known you Stirling. Our thoughts are with Susie and his family – RIP legend”

Toto Wolff:
“Sir Stirling was a larger-than-life figure in our sport and one of the survivors of an age when motor racing was about danger, bravery and camaraderie. But most of all, Stirling’s career was characterised by an impeccable sportsmanship and in this he truly set himself apart. He was a great figure in the history of Mercedes, both as a Grand Prix driver and the winner of the 1955 Mille Miglia. It is no exaggeration to say that we will never see his like again. Our deepest condolences go to his wife Lady Susie, his family and his friends. Godspeed to a true racer.”

Martin Brundle:
“RIP Sir Stirling Moss. A mighty racer and gentleman. He had a press on style on the track and in life. Remarkable man. Survived the most dangerous era of motorsport and died today aged 90. He had such great stories to tell, and it was a privilege to know him.”

David Coulthard:
“Sir Stirling had a unique and raw talent behind the wheel, loved his racing and lived life to the full. A truly great character and gentleman who will be sorely missed by all who had the fortune of knowing him. I would like to add my most sincere condolences to Lady Susie Moss, their son Elliot and to his daughter Allison on their loss. Ciao Stirling!”

Tiff Needell:
“We all knew the day was nearing and finally ‘Mr Motor Racing’ has gone. Stirling Moss was forever ready with a smile and a warm welcome, a maestro behind the wheel and a proper ‘chap’ often telling tales of chasing the ‘crumpet’ in a bygone era …”

Alfa Romeo Racing:
“RIP, Sir Stirling Moss. A true sporting legend. Our condolences to his family and loved ones.”

AlphaTauri:
“Today the motorsport world lost one of its legends. RIP Sir Stirling Moss. Our deepest condolences go out to his family and loved ones.”

Ferrari:
“RIP Sir Stirling. A true legend and a wonderful person. To Scuderia Ferrari, he was a formidable opponent. Our thoughts are with his wife, family and friends.”

Haas:
“Today we have lost a true legend of motorsport. A formidable racer and a real gentleman. Rest in Peace Sir Stirling Moss. Our thoughts are with his family.”

McLaren:
“All at McLaren mourn the passing of a legend of our sport, Sir Stirling Moss. A prodigious competitor, supremely talented racer, and consummate gentleman, he leaves an indelible mark of greatness on the history of international motorsport. Our condolences to his family.”

Mercedes:
“Today, the sporting world lost not only a true icon and a legend, but a gentleman. The Team and the Mercedes Motorsport family have lost a dear friend. Sir Stirling, we’ll miss you.”

Racing Point:
“Rest in peace, Sir Stirling Moss. An icon not just of Formula One, but of sport as a whole. Our condolences to his family and friends. He will be dearly missed.

Red Bull:
“A pure racer and an inspiration to the entire motorsport community. Rest in peace Sir Stirling Moss. Your legacy will live on.”

Williams:
“A true icon of our sport. Our thoughts and condolences go out to his family & friends. Rest in peace, Sir Stirling Moss”

Formula 1:
“One of the true greats of Formula 1. All at F1 send our heartfelt condolences to Lady Susie and Sir Stirling’s family and friends.”

DTM:
“RIP Sir Stirling Moss, truly one of the Titans. A racer whose effortless panache on & off the track saw him prosper during motorsport’s most gallant and dangerous era. A man who embodied the words ‘racing driver’…”

Formula E:
“Today we send our kindest thoughts and condolences to the loved ones of Sir Stirling Moss, a gentleman whose talent and resolve inspired millions across generations. Rest in peace.”