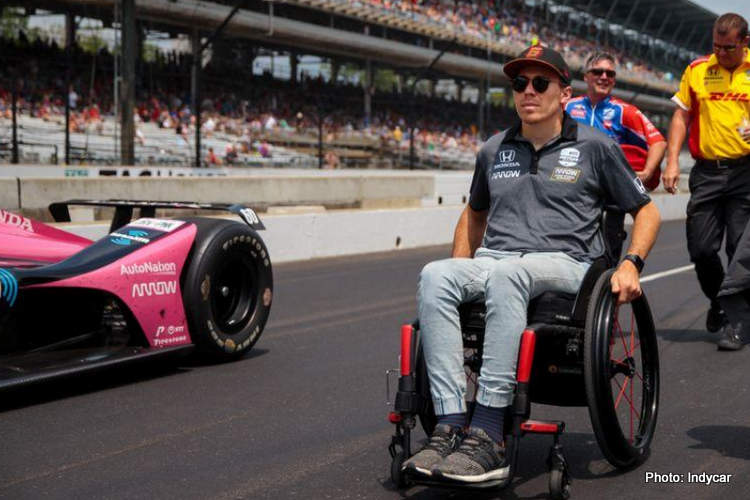 Robert Wickens will be back behind the wheel on Saturday for the first time since a near-fatal crash two years ago and while it will be a virtual IndyCar race the Canadian sees it is another step towards the real thing.

“I’m just excited to drive something. Last night was the first time I’ve driven any form of race car since the accident at Pocono Speedway,” Wickens told reporters during a conference call on Friday, after getting in his first few practice laps at Barber Motorsport Park.

“Even though it was virtual it still felt pretty good.”

With the novel coronavirus outbreak forcing a shutdown of global sport it has presented an unexpected opportunity for Wickens, who sustained devastating spinal injuries in the crash, to once again go wheel-to-wheel with his IndyCar Series rivals in the iRacing IndyCar Challenge.

Formula 1, NASCAR and IndyCar have all found eager audiences for virtual racing in the absence of the real thing, with drivers, like fans, looking to fill a sporting void.

Last week’s series opener at a virtual Watkins Glen was won by Sage Karam and attracted more than 400,000 viewers on live streaming.

Yet those numbers are expected to jump on Saturday with the Indy Grand Prix of Alabama airing live on NBCSN, using their number one broadcast crew.

Yet the driver in the spotlight is likely to be Wickens, who will be testing out a steering wheel with hand brakes and a gear shifter that he hopes will one day allow him to get back into a real IndyCar.

“It’s weird it is kind of a mental overload my brain was exploding from figuring out how to use the hand brakes the feeling of it and everything,” said Wickens. “It is a lot of work to do in a short amount of time.

“I always knew race simulation was going to be the best way to try all the different hand brake configurations or paddle configurations so this is really just step one of a hundred to get me back into the IndyCar series.”

While other drivers are treating the iRacing IndyCar Challenge as a diversion and a bit of fun, for Wickens it is serious business taking him closer to his stated goal of getting back in the cockpit of an IndyCar.

That had seemed an impossible dream in the aftermath of his horrific crash on Aug. 19 almost two years ago when his car became airborne, catapulted into the catch-fencing and disintegrated across the track.

Along with a thoracic spinal fracture and a spinal cord injury that left him paralyzed, Wickens also suffered tibia and fibular fractures to both legs, fractures in both hands, a fractured right forearm, a fractured elbow, four fractured ribs and a pulmonary contusion.

Wickens’s courageous efforts to walk, dance at his wedding and get back into a race car have been documented with regular posts on social media.

The 31-year-old Canadian has made remarkable progress, regaining some feeling in his legs and standing on his own.

“I am just so happy I can get back and compete with these guys,” said Wickens. “The biggest thing for me is, although this is fun, I see this as the long term project of getting me back into a race car.”