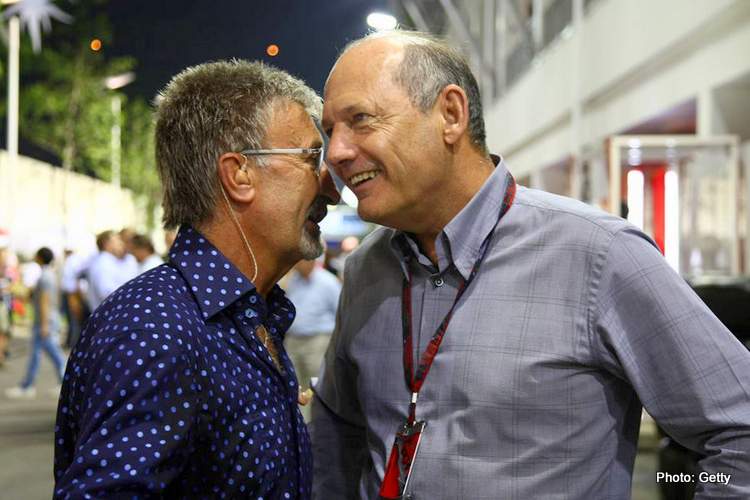 Porsche have announced they will be making a return to Formula 1 in 2022 with a factory team where Eddie Jordan and Ron Dennis will be at the helm — the team will be entered as Porsche Project-5 Formula 1 Team.

Earlier in the year, it was revealed that Porsche had in fact developed their own F1 ready engine and power unit. In 2017, Porsche ruled out a run in F1 to focus on the electric revolution as opposed to the V6 turbo hybrid era.

It is understood that the change in belief in F1 from Stuttgart comes as a result of the postponing of the 2021 regulations to 2022, allowing the team ample time to develop their competitor behind the scenes.

Porsche’s head of motorsport, Fritz Enzinger has secured the business of two F1 stalwarts in the form of Eddie Jordan and Ron Dennis to help acclimatise the brand to the new way of life in the sport and offer their inside knowledge and directives.

Despite his career in motorsport starting in the cockpit, Eddie Jordan made his name in team management and ownership. ‘EJ’ founded the Jordan Grand Prix team in 1991 which gave Michael Schumacher his F1 debut that same year at Spa.

The team earned a memorable 1-2 result, again in Belgium, at the chaotic 1998 running of the Grand Prix. Following the demise of the Jordan Grand Prix team in the early and mid 2000s, Eddie has since swapped the pitwall for the paddock with numerous media outlets including the BBC and Channel 4.

Ron Dennis was the team principal of McLaren F1 team from 1981 to 2009 where he remained chairman of the McLaren Group until 2017. With his signature MP4-X naming system, Dennis turned McLaren into regular championship contenders and was key for bringing in the likes of Lauda, Prost, Senna, Hakkinen and Hamilton whom have each won titles with the outfit.

Porsche’s last involvement in F1 was 1991 as engine supplier for the Footwork team. However, the involvement ended on a flat note with a bizarrely complex and bulky V12 some 60kg and 40bhp down on the likes of Ferrari’s take. Given the ungodly size of the engine, Footwork were unable to fit the V12 in their planned chassis, the FA12, and had to resort to a modified A11B chassis that was to be renamed the A11C.

The news from Stuttgart is a greatly welcome change from the constant grumblings surrounding the COVID-19 response in and around the paddock.

The first chassis will be the Porsche PP5-01 and more details regarding the design team will be detailed during an official press conference at a later date, however it understood a very big name engineer has been lured to the new team.

Drivers have yet to be announced, but word is there are a host of candidates on the radar including none less than Lewis Hamilton who Dennis would go all out to lure back should Mercedes pull the plug on their F1 programme with Toto Wolff’s soon-to-be-announced move to Ferrari.

Meanwhile, Porsche Formula E drivers Neel Jani and Andre Lotterer are top candidates for the drive, with Mark Webber and Brendon Hartley expected to be part of the programme in a test and advisory capacity, the former might even be roped-in to partner Lotterer or Jani should one of them get the job.

And of course, perennial racer-for-hire Fernando Alonso is also said to be on the list, depending at what temperature his cold-hot-cold-hot-cold-etc-etc relationship is at, with Dennis, when they sit to thrash-out a deal.

Nevertheless the combination of Dennis’ meticulous attention to detail, Jordan’s rock ‘n roll attitude coupled to Porsche’s commitment to winning makes for a heady combination backed by unprecedented experience in the sport at the highest level.

AN APRIL FOOLS EFFORT BY GP247