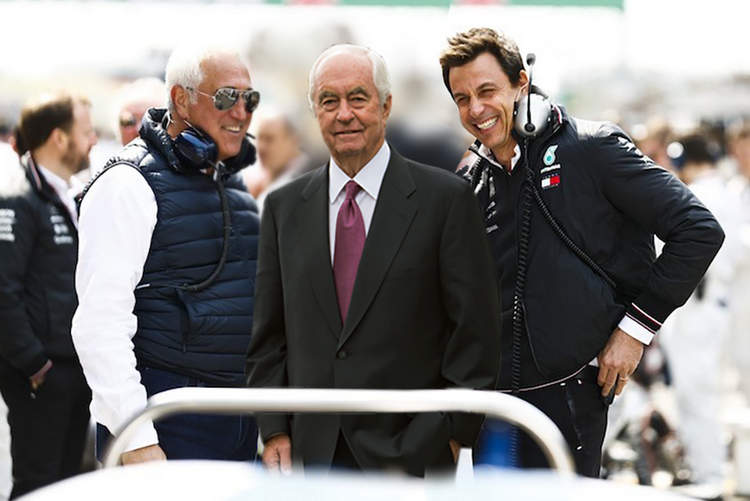 In news that is set to shake the motorsport world, we have learned that Mercedes motorsport chief Toto Wolff and Canadian billionaire Lawrence Stroll have struck a deal to purchase 51% of Ferrari and at the same time tapped up their friend Roger Penske to buy Formula 1.

An announcement confirming this latest development expected within hours.

While the world went into lockdown, Stroll, Wolff and Penske have been very busy behind-the-scenes to concoct an audacious takeover of the legendary Italian automaker and the sport of F1 in one swoop.

Coupled to Stroll’s recent purchase of a substantial chunk of Aston Martin and earlier Racing Point, his automotive portfolio has mushroomed impressively. The Ferrari acquisition the crown jewel of his empire.

Wolff is expected to head up the sporting side at Maranello and re-energise it as he did for Mercedes, while Stroll will be the team’s president taking over from Agnelli scion John Elkann who will remain on the board as will Piero Ferrari who reportedly backed the deal from the outset.

Slick manoeuvring by the Wolff-Stroll consortium led the unlikely takeover as they had managed to purchase a majority stake, buying from private investors, in what was a fast and slick corporate raid that will have seismic repercussions.

This development comes when it emerged earlier this month that Liberty Media had approached Stroll and Wolff to buy F1, but at that point, the pair had their eyes set on the Prancing Horse but could not let a good deal go.

Reports suggest that the paperwork was final with Chase Carey ready to sign over when FOM were informed that Roger Penske was now in the loop and would dip into his empire to fund the purchase of the sport from Liberty – lock, stock and barrel – for the agreed price of $2.5-billion which is just over half of what the Americans bought the sport for not so long ago.

But the COVID-19 pandemic has meant a massive income catastrophe which will quickly gobble up whatever cash is lying around. In other words, Liberty were eager to cut their losses and Penske was sent in as the saviour when Stroll and Wolff opened the door for him to step in, making the trio the most powerful men in modern motorsport.

Hence the speed of the deal which was triggered on March 24th and was inked on Friday, March 27th with the announcement pending.

By the end of this week, signore Wolff and signore Stroll will have desks at Maranello while Penske will add F1 to his vast portfolio of businesses, including a storied racing team and the Indianapolis Motor Speedway.

Toto’s future remains uncertain but should be clarified later in the day when this news goes mainstream. An insider close to the center of the storm suggests that Daimler will reconsider their role in F1 and likely to sell the team to the highest bidder at the end of 2021, when the current rules end.

Word is they will revert to engine supply with McLaren likely to be the favoured factory team, while Aston Martin (aka Racing Point) will defect to Ferrari power, strengthening the Ferrari powered camp by an extra team.

Inevitably this development throws into doubt the future of both Lewis Hamilton (Mercedes) and Sebastian Vettel (Ferrari) who are out of contract at the end of this year. It is unknown if either driver has been privy to the news, while neither has commented at this stage but expect a social media explosion when this news becomes official hours from now.

It is well known that Hamilton has had talks with the previous Ferrari regime but declared his loyalty to Mercedes, however, will that be so when Wolff jumps ship and starts to steer the Scuderia when he takes over at the end of 2020?

Meanwhile, Stroll senior is unlikely to oust hot property Charles Leclerc who has settled well into the team and word is that the clothing-mogul will only countenance Hamilton in the sister car, but if the Englishman decides to stay loyal to Mercedes – perhaps make a round trip to McLaren in the process – then one would expect Lance Stroll to step in as teammate to the Monaco Kid.

In coming days it will be interesting to learn why Wolff and Stroll ditched the idea of buying F1, but instead and instead opened the door to Penske’s purchase of the sport at the highest level. Is Ferrari really a better deal?

Here is an extract of the press release that is expected to be sent out later today by the new Ferrari management:

“Today will go down as a historic day for Formula 1 and motorsport as a whole as the sport’s most iconic team – Ferrari – welcomes Mr Lawrence Stroll and Mr Toto Wolff to Maranello as President and Sporting Chairman respectively.
This marks a new era for Ferrari as the new winds of change will galvanise the spirit of the Scuderia and Tifosi alike. That our team with humble beginnings under the stewardship of Mr Enzo Ferrari can today attract the man who made Mercedes the most powerful team in F1 history is a testament to those who bleed out Red.
The goal is not only to continue to set the benchmark in sportscars but also to return our team to the top of the F1 pecking order where it has not been for far too long.
Mr Stroll, a great collector of our cars, has great ambitions for the marque while he and Mr Wolff will reveal their action plan at a press conference later today.”

In a separate press release from the desk of Roger Penske, the following extract was emailed to us:

“Formula 1 now belongs to Mr Roger Penske. In a deal worth $2.5-billion, Liberty Media have agreed to hand over the keys to No. 2 St. James’s Market, London on the first day of April whereupon The Captain will take the helm of the ship.
Mr Penske and his associates will present the news at a virtual press conference later today (time TBC) and with it the plans for the premier open-wheeler series which includes a return to Indianapolis for F1; greater synergy between Indycar and F1 coupled to the prospect of Indycar returning to Europe for a couple of races each year.
Further information and digital press-pack will be emailed to you when the news is made official.”

At this stage, none of the parties commented when approached about this report, but rather an email was received by us from their respective spin doctors stating “further information to be made available at 16h00 GMT” coming from the Stroll-Wolff camp and a “we will send you a Google Hangouts URL to join the online press conference at 17h00 ET where more will be revealed” from the Penske group.

AN APRIL FOOLS EFFORT BY GP247