Ferrari & Sebring: More than once around the clock 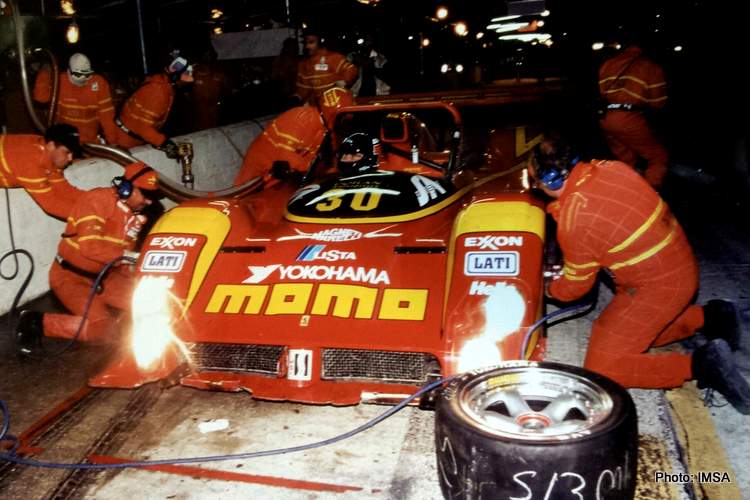 Ferrari in Sebring have much in common. The Italian icon and the American race have been interwoven from the very beginning — in fact Scuderia Ferrari is the winningest team in the race they call ‘Once Around the Clock’ — factory Ferraris have won the race eight times since that race on a track that has evolved out of the Hendricks army World War II army airfield first happened as a six-hour on New Year’s eve 1950.

That first race was, however, run on handicap, rather than absolute speed, which is why Ralph Deshon and Fritz Koster’s little 750cc Crosley Hot Shot surprisingly appears in the results ahead of Jim Kimberly and Marshall Lewis’ 2-litre V12 Ferrari 166 MM Barchetta. There were two other Ferraris in that pioneering Sebring 6-hour — Bill Spear and George Robert drove their 166 MM coupe to fourth overall, while Luigi Chinetti and Alfredo Momo ended seventh in a Briggs Cunningham-entered Ferrari 195 S.

The race returned as a 12-hour early in 1952 when Bob O’Brien and Richard Cicurel drove a Ferrari 166 home in fourth, while Bill Spear and Briggs Cunningham’s 340 America and James Simpson and George Colby’s 166 MM both retired. Ed Lunken and Charles Hassan brought Lunken’s 166 MM home sixth in ’53, while a pair of 225 Ss driven Jim Kimberly and Marshall Lewis, and Bill Spear and Phil Hill, retired.

In 1954 Phil Walters and John Fitch and Phil Hill and William Spear’s Ferrari 375 MMs were keeping the Lancia D20s driven by Fangio, Ascari and Taruffi’s factory Lancial honest, but all of the above hit trouble to allow Stirling Moss and Bill Lloyd to steal an unexpected win in Cunningham’s OSCA. And in 1955, Phil Hill and Carroll Shelby thought they’d won in Allen Guiberson’s 750 Monza Spyder, but Mike Hawthorn and Phil Walters’ Jaguar D-Type was later declared the winner.

After five years of privateer teams narrowly missing wins for various reasons, Scuderia Ferrari sent a couple of works 860 Monzas to Florida with Juan Manuel Fangio and Eugenio Castellotti, and Luigi Musso and Harry Schell at the helm and in spite of a Valliant effort by Mike Hawthorn and Desmond Titterington, their Jaguar D Type ran out of brakes to allow the factory Ferraris to romp home as Fangio and Castelotti turned in a record 194 laps.

1958 proved a tough one for the factory Ferraris. Peter Collins and Maurice Trintignant and Alfonso de Portago and Luigi Musso fought through a litany of issues to bring their 315 Ss home fifth and sixth behind Fangio and Jean Behra’s 450S and Stirling Moss and Harry Schell’s Maserati 300Ss, Mike Hawthorn and Ivor Bueb’s Jaguar D-Type and Masten Gregory and Lou Brero’s privateer Ferrari 290 S.

From there Ferrari entered a glorious six-year golden Sebring era as Phil Hill and Peter Collins’ 250 TR 58 turned in a record 200 laps to lead a 1-2 from Luigi Musso and Olivier Gendebien.  Gendebien, Hill, Dan Gurney and Chuck Daigh led another Ferrari 1-2 over Jean Behra and Cliff Allison in ’59 — Hill and Gendebien had taken Gurney and Daigh’s car over after their gearbox broke. Howard Hively and Richie Ginther’s GT winning factory Ferrari 250 GT California ended ninth.

1964 brought another Scuderia Ferrari Sebring 12-hour 1-2-3 as Mike Parkes and Umberto Maglioli’s 275 P beat Ludovico Scarfiotti and Nino Vaccarella’s similar car and 275 John Surtees and Lorenzo Bandini’s 330 P. Up until ’64, when the factory team entered the Sebring 12-hour, it generally took two new cars to Florida and backed them up with a third team in one of the previous year’s cars.

Ferrari skipped the 1965 race, leaving David Piper and Tony Maggs to chase the latest Chapparal and a new Ford GT40 home in Piper’s venerable Ferrari 250 LM, but the factory team was back at Sebring in ’66 as Ludovico Scarfiotti and Lorenzo Bandini’s Dino 206 S came home fifth overall and second in the 2-litre class. Ferrari skipped the 1967 and ’68 12-hours but returned in ’69 when Chris Amon and Mario Andretti’s 312 P ended second behind Jacky Ickx and Jackie Oliver’s Ford.

Maranello was back on top at Sebring in 1970 as Ignazio Giunti, Nino Vaccarella and Mario Andretti took the win in a 512 S and again in its last entry as a factory team in 1972, when it left with another 1-2 as Mario Andretti and Jacky Ickx led Ronnie Peterson and Tim Schenken’s similar 312 PB home. In all, Ferrari’s factory team has won a record eight Sebring 12 hours, with Mario Andretti, Phil Hill and Olivier Gendebien each winning in three of those races too.

But Ferrari’s Sebring success was not yet over — while its cars were not catered for by the rules for the next 20 years, there were a few privateer efforts until 1995, when it built the new 333 SP to suit both US and world sportscar rules. The SPs were customer cars only, but that did not stop Scandia’s Fermín Vélez, Andy Evans and Eric van de Poele from storming to Sebring victory that year with its second car driven by Mauro Baldi, Michele Alboreto and van de Poele third.

Ferrari then took another Sebring 12-hour hiatus until returning as a GT regular since 2007, when Mika Salo, Johnny Mowlem and Jaime Melo took GT2 honours in a Risi Competizione Ferrari F430GT, before Salo, Melo and Pierre Kaffer led Gianmaria Bruni, Matías Russo and Luís Pérez Companc home in a 2009 1-2. Melo, Bruni and Kaffer did it agaon for Risi in 2010, while Tracy Krohn, Niclas Jönsson and Michele Rugolo took GTEAm honours in F430 GT2 in 2011.

Whether this year’s currently delayed Sebring 12 hour actually still actually happens remains to be seen, but when the epic race does return, and with sports and GT car racing rules in limbo, will Scuderia Ferrari be back any time soon to build on its record eight wins as a team? it certainly seems time for the factory Ferraris to once again go Once Around the Clock