Briatore: Nobody puts the pressure on Hamilton 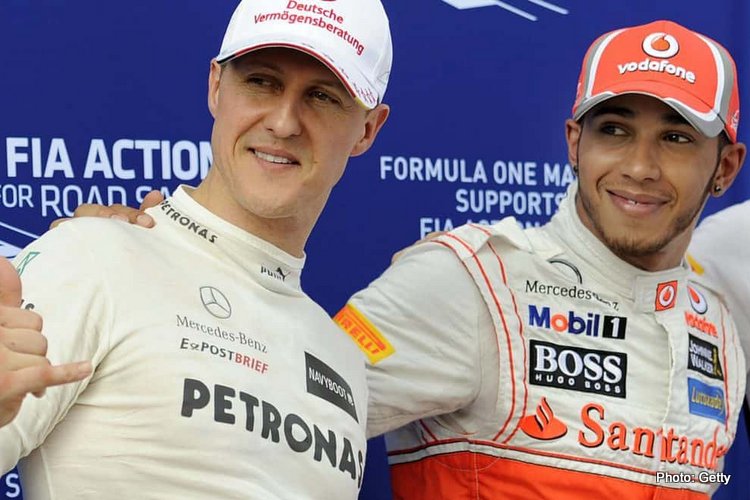 One shy of Schumacher’s record seven driver’s championships after his title in 2019, Hamilton is fast closing-in on the German’s place in the record books.

However, Briatore does not believe the numbers tell the full story.

“You need to recognise that, when Michael arrived [in F1], the climate was tough,” he told Formula 1’s Beyond the Grid podcast. “You’re talking about Nigel Mansell, you’re talking about [Ayrton] Senna. Now it’s less, the competition. You have two drivers, three drivers… Nobody puts the pressure [on Hamilton].

“If he was driving like a taxi driver with a hand outside of the car, [he’d still be] winning everything because he’s a super driver, he’s fantastic.”

Joining Briatore’s Benetton towards the end of the 1991 season, Schumacher quickly established himself as one of the sport’s premier talents, although it was not until 1994 — the season where Senna was killed in the third race at Imola, and Mansell raced only four times in his stead — that he broke through to win his first driver’s championship, edging Senna’s Williams teammate Damon Hill by a single point. The German would go on to dominate the 1995 season before switching to Ferrari in 1996, where he won five-straight driver’s crowns from 2000 to 2004.

As to Hamilton’s performances, Briatore maintains there is only one other driver on the grid capable of challenging him, with the potential for another to eventually join the fight.

“There’s only two stars in Formula 1 – Hamilton and [Max] Verstappen.

“[Charles] Leclerc is young, big balls, which he’s demonstrating. I believe, if I was Ferrari, I’d have put Leclerc two years ago into the place of [Kimi] Raikkonen, because you know, with Raikkonen you’re going nowhere, you’ll never win anything with him… I’d [have taken] the risk to put Leclerc. Leclerc is a really, really strong guy. But Leclerc is not recognisable now. Verstappen for me is the more incredible driver. He’s fantastic in the way of overtaking.”

Interestingly, Verstappen’s father Jos raced for Briatore alongside Schumacher in 1994, but as far as the Italian is concerned, there is no comparison.

“No question. The name is the same, but the driver is completely different… I tell the father, ‘Jesus Christ, I wish I had your son in the car and not you!’”