Binotto: We have built more trust between Vettel and Leclerc 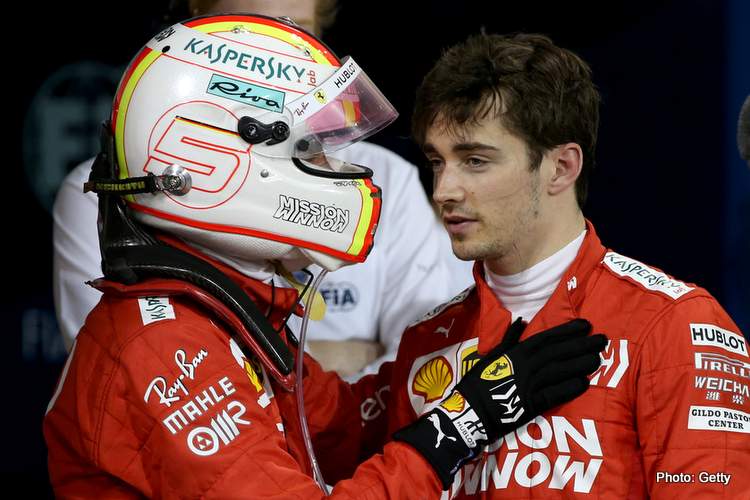 One of the highlights of last season’s Formula 1 World Championship, which was done and dusted by mid-year, was the feud between Ferrari drivers – Sebastian Vettel representing the old guard and Charles Leclerc carrying the torch for the young guns.

Fireworks were always going to be on the cards as the 32-year-old four-time F1 World Champion faced up to the team’s homegrown prodigy ten years his junior. The once favourite son making space for the new kid on the block.

What transpired, namely a season of niggle between the pair, is now history, their embarrassing clash during the Brazilian Grand Prix, the penultimate race on the calendar, suggests this rivalry is on ice and, despite all the right PR noises from both camps, time will tell if indeed this is resolved.

Ferrari team boss Mattia Binotto is taking the lessons from last year and told F1.com that believes the rules-of-engagement will be obeyed in the future thanks to the experiences of 2019, “What happened last year was important for both of them. We discussed and had some clarity as to what I’m expecting.

“The team interest is the top priority, and the constructors’ championship is a key element. They are free to race, but that doesn’t mean we can’t still apply team orders in the interests of the team. But if the team is doing well, the drivers get the benefit of it.

“I think we have built more trust and confidence between us as a team, between the drivers, and that will be helpful in 2020,” added Binotto.

Tragically, with COVID-19 engulfing the world that rivalry is unlikely to happen before July and that would be a best-case scenario, with some predicting a total wipe-out of sport in 2020 across the globe as the Olympics are set to be cancelled while every other sports are on indefinite shutdown.

Ferrari have been deeply affected, with Italy one of the hardest hit by the rampant coronavirus. The country is in virtual total lockdown with very little light at the end of the tunnel.

Binotto said, “There is a need for serenity now, to be together with our families and to recharge the batteries. These three weeks of shutdown – an anticipation of the summer break – will serve to fill up your energy and then to push hard in the following months, when we will have two challenges to face at the same time, that of 2020 and that of the 2021 project.”

Already the big change in F1 rules package set for 2021 has been delayed for at least an extra season, while the pandemic is a huge financial blow to the sport’s owners, teams and all affiliated businesses – as it is to every business in this current crisis.

“We will have a conference call with all the other teams, F1 and FIA to discuss the situation and the impact it has not only on this season but also on the next one,” revealed Binotto.

“We must carefully evaluate every aspect and see if it is not really the case to think about possibly postponing the introduction of the new 2021 technical rules. In any case, Ferrari is ready to take responsibility for a choice that must be made in the ultimate interest of this sport, it is certainly not the time for selfishness and tactics,” insisted the Ferrari boss.

Meanwhile, sadly the next episodes of Seb versus Charles will have to wait, but when action resumes, a guaranteed box-office sideshow of the championship is set to unravel even further.

If we are looking for the next Senna-Prost enmity, Vettel-Leclerc has all the hallmarks and equally fiery contest because to win in F1, you first have to beat your teammate. Priority number one.