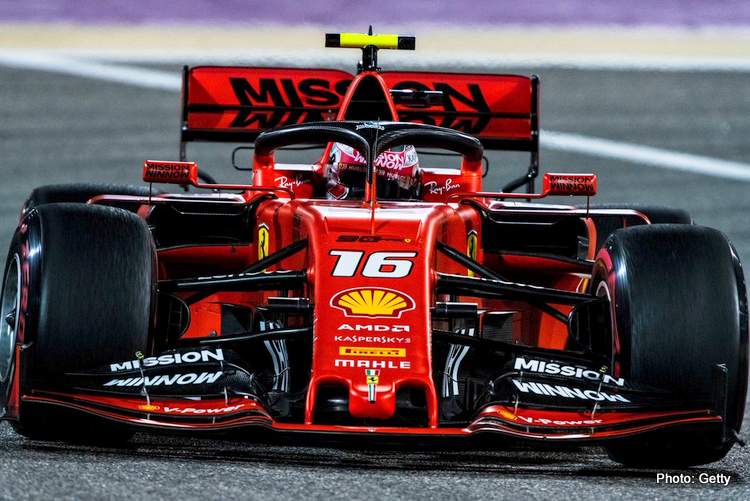 Charles Leclerc will start his second race as a Ferrari driver from pole position after qualifying fastest of all at the Bahrain Grand Prix, outshining his four-time Formula 1 World Champion Sebastian Vettel who will start the race from second place.

After a resounding defeat at the season-opening Australian Grand Prix to Mercedes, the tables were turned at the desert venue as Ferrari ‘found’ the performance that had gone AWOL in Melbourne while the World Champions were unexpectedly further back than expected.

Leclerc’s best effort 0f 1:27.866 was good for the top spot start and thus he became the second youngest ever pole-winner in F1 history.

It was a big moment for Ferrari as their gamble on youth has paid off and Leclerc delivered for them under the floodlights of the five-star Sakhir venue.

Earlier in the day he was fastest in FP1 and then was unbeaten throughout qualifying. It was a polished performance from a driver who seized the moment to rise to the occasion.

Leclerc said afterwards, “I’m extremely happy, in the last race I was not happy with qualifying and I did some mistakes in Q3 so I worked hard not to make the same mistakes again, extremely happy. Sebastian is an amazing driver and I have learned a lot, and I will learn all year, but today I’m very happy to be in front of him.”

Vettel was three-tenths down on his teammate as he was in all three stanzas of qualy, he said in parc ferme, “Maybe I was a bit shy in the second sector, Charles did a very good job today and deserves to be on pole, it puts us in a great place for tomorrow. The main thing is we got the job done.”

Lewis Hamilton gave it a bash but was a couple of tenths short with Party Mode dialled up for the Silver Arrows, on the night he found half a second that had eluded him throughout practice but it was not enough. Valtteri Bottas was fourth.

Hamilton summed up his afternoon,  “I really enjoyed qualifying and great to see the progression for us over the weekend. The Ferraris were very quick and congratulations to Charles. Tomorrow is the important day and we will give them a great fight. We are going to work at it and keep our heads down and see what happens.”

Bahrain was something of a reality check for Red Bull as Max Verstappen had to dig deep to snatch fifth place but Honda ‘Party Mode’ was nine-tenths shy of what Ferrari had. Pierre Gasly continued to struggle and was only good for 13th, four tenths slower than his teammate in Q2.

Best of the rest was Kevin Magnussen in the Haas, with the sixth best time followed by Carlos Sainz in the McLaren and Romain Grosjean in the other Haas in eighth.

Kimi Raikkonen turned around a troubled two days for Alfa Romeo to claim the ninth-best time, with Lando Norris rounding out the top ten.

It was another disappointing showing by Renault, boasting handy top speed during practice they simply didn’t deliver on the day. Nico Hulkenberg looked good for Best of the Rest in FP3, but then was only good for 17th when it mattered.

Daniel Ricciardo was 11th fastest, an improvement from practice, but the Aussie is still struggling to find the sweet spot with the Renault. 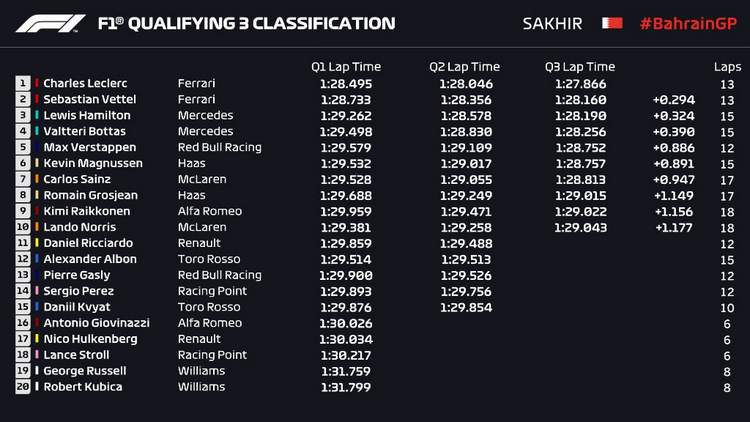