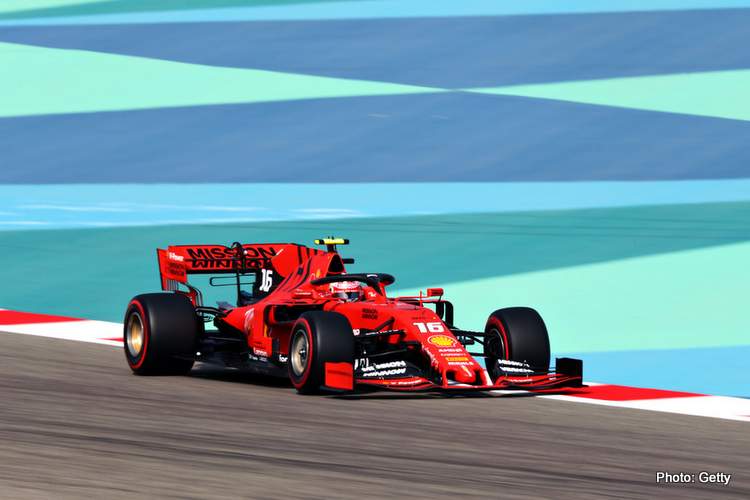 Ferrari new boy Charles Leclerc topped the timing screens in the third and final free practice of the Bahrain Grand Prix weekend, Round 2 of the 2019 Formula 1 World Championship, at Bahrain International Circuit in Sakhir.

The 21-year-old topped the timing screens at the end of the one-hour FP3 session with a best lap time of 1:29.569 which was a tenth and a half quicker than teammate Sebastian Vettel in the sister car.

Lewis Hamilton was third fastest but seven tenths shy of the top time and a tad faster than teammate Valtteri Bottas in fourth. Mercedes are either in trouble or playing great poker. Qualifying will reveal all.

Romain Grosjean was best of the rest in the Haas, albeit 1.3 seconds down on the top time – the gulf between the Big Two and the rest has increased.

Nico Hulkenberg again showed strong pace relative to Daniel Ricciardo who was seven tenths off his teammate and down in 16th. The German ended the session sixth and quickest of the Renault powered quartet.

Tipped as the pre-season favourites after posting strong times in testing, Ferrari went into the weekend hopeful their mysterious lack of pace at Melbourne’s Albert Park track was merely a one-off.

Historically strong in Bahrain, with a record six wins including two in a row for Vettel in the last two years, they have dominated every session so far.

The closest that Mercedes have managed to get to them has been 0.6 seconds.

The margin is misleading, however, Ferrari cautioned after Friday’s practice sessions while Mercedes boss Toto Wolff said the red cars had only a “tiny edge” on his team’s challengers.

With the battle for pole position set to take place in cooler conditions in the evening under the floodlights, unlike the hot and sunny conditions drivers faced in the final practice session, the gaps could well close up. 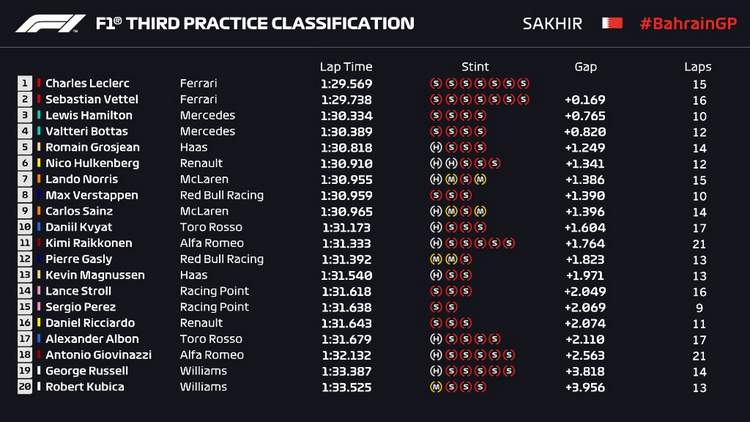