Inside Line: Jean Todt triggers legal action against our site 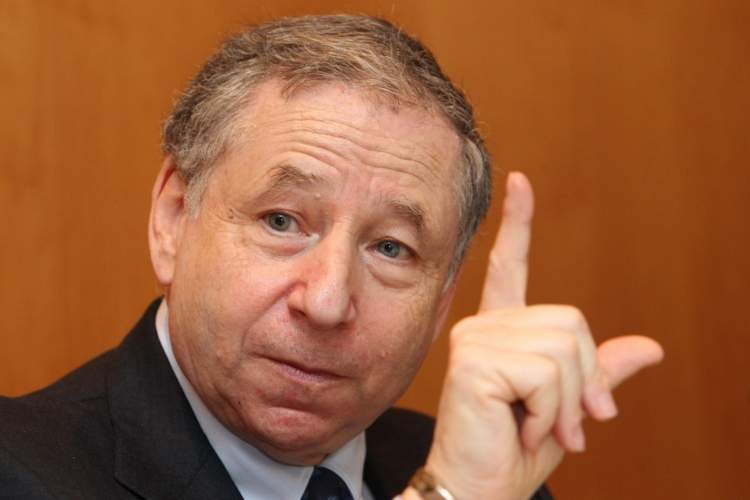 We received by email a letter of demand from South Africa-based lawyers Webber Wentzel representing Jean Todt in his personal capacity, demanding three Red Mist pieces be unpublished on our site as, according to them, they defame the man.

The question of conflict of interest exploded when it was revealed that FIA President Todt orchestrated a secret agreement with Ferrari amid suspicions the Italian team were cheating.

Todt’s handling of the matter was called into question by many websites including ours, while fans have been calling for him to step down.

I gladly admit and say it was I, as Editor-in-Cheif of this site, who piqued Michele Lupini to write a series of Red Mists triggered by a WhatsApp conversation with him that went something like this:

Paul: It would be great to have a Ferrari fan actually see that these secret deals are bad for the sport… and maybe time for Jean to go?
Michele: Let me think about it…

And he did more than that and these were published:

The trio of Red Mist pieces pulled no punches, laying out the history of the President and questioning the conflict of interest, not only regarding Ferrari – where Mr Todt enjoyed his greatest achievements in the sport – but, now, but also his son Nicolas Todt who manages Charles Leclerc, the sport’s hottest property alongside Max Verstappen.

Throw in the secret deal which ultimately triggered this, and I ask: Are we alone in crying ‘elephant in the room’ and ‘conflict of interest’  or will they sue everyone?

As an ‘opensource’ website with our readers’ right to know paramount, I present an extract from the letter of demand: 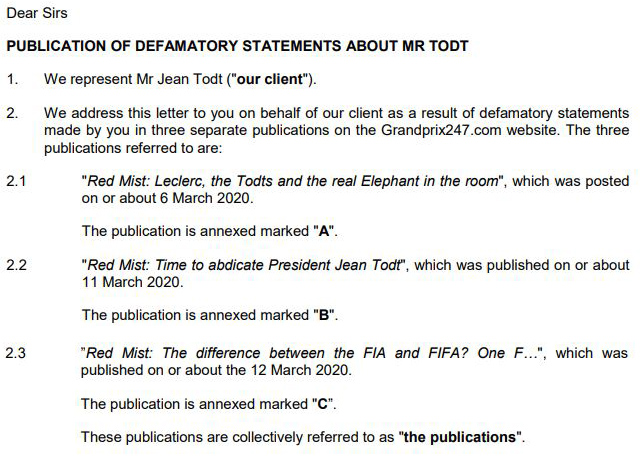 An extract from our response: 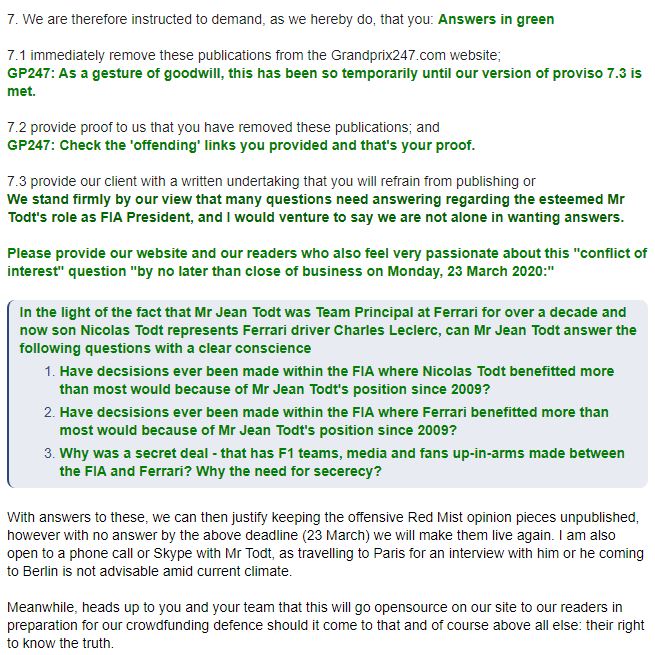 What I needed to say on the matter is said above, and Michele Lupini has this to say:

“In response to the FIA’s secret Ferrari Fuel Flow conclusion and threats of action by F1’s ‘group of 7’, grandprix247.com discussed the matter and I agreed to write on it. As a journalist, I did my job to question the relationship between various famous facts in a series of articles that make no allegation nor accusation, are not defamatory and do not suggest how anyone conducts themselves and indeed invite Mr Todt’s response. If anything Mr Todt’s legal reaction flies in the face of the freedom of the media to objectively report the facts.