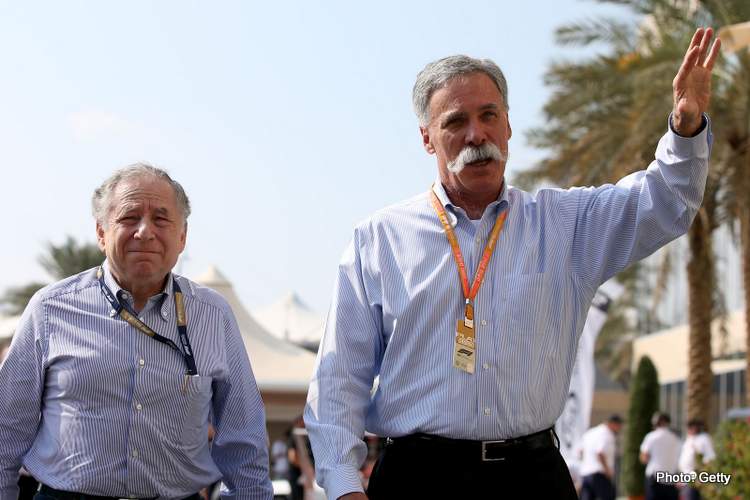 Believe it or not, even people who have turned their passion for Formula 1 into a profession have other hobbies as well. One of mine is studying body language.

Exhibit A: Chase Carey when he stood next to the two Australian officials and Michael Masi after Toto Wolff cancelled the Australian GP.

Instantly, that old Sesame Street song popped into my head:

If you guessed that the one who doesn’t belong is the one rightly worried about his job, you’d be correct.

While elephant-sized turds were hitting helicopter rotor-sized fans in Melbourne, Jean was somewhere else on this (I presume) planet, posing with a lineup of somebody else’s for a pathetic photo op – for some reason. That’s all you need to know, because that’s all the involvement he had in F1’s worst-ever crisis.

But don’t be surprised about that. That’s what Todt does these days. He’s basically cruising.

In contrast, Carey looked like a Dead Man Walking because he’d actually been working hard. In the 24 hours before, while the McLaren man who now has F1’s first coronavirus infection was possibly exposing everyone else in and beyond Albert Park, poor Chase was in Vietnam, coming to terms with the fact that Hanoi ain’t gonna happen (even though he won’t admit it to himself until an hour before practice).

But now, having effed up an entire F1 season in a way that nobody has ever done before, we might not get any races at all this year.

It doesn’t give me any pride to announce that I was calling for F1 to OBVIOUSLY call off Melbourne as long ago as March 2 – check my Twitter (@amait). If they had, which was the only sensible thing to do when the world was exploding with what was OBVIOUSLY already a terrifying global pandemic, then either the McLaren man (and possibly his 14 team buddies who are also now in quarantine) would not have coronavirus at all, or it could have been McLaren’s problem alone back in the UK.

Does this situation have the ability to bankrupt teams like Williams? Destroy F1 altogether? The fact that I can legitimately pose a question like this and not sound like a lunatic is the only answer you require for now.

But wait just a moment, Maitland, I hear you politely (yeah right) protest. Surely it’s the reckless Australian race and government officials’ fault too! I mean, one day – ONE DAY! – after all those Ferrari guys jetted in from the red zone, all Italian travel into Australia was banned.

How convenient. And once coronavirus was being coughed and smeared all over Melbourne, the race organisers were STILL piling on enormous pressure to push on with the race, even though the decision to cancel had already been made but not announced to thousands of Aussies locked outside the circuit gates.

All true. All unforgivable.

Side note: Chase’s decisions were inadvertently or not made for him, and bravo Sebastian Vettel and Kimi Raikkonen for having the balls to get the hell outta here WAY before the cancellation was made belatedly official. If not for them, we might be making a horrible situation worse by carrying on as though the world is not dealing with the worst and least predictable pandemic of our lifetimes.

But back to that Dead Man Walking. And for once, I’m lost for words.

This episode is perfect evidence not just that Carey has no place running Formula 1 – it’s irrefutable proof that when a duty of care to human beings who look to you for leadership, it should be the easiest task in the world to order a junior press officer to write a Tweet on the official F1 account: “***RACE CANCELLED. LIVES MATTER MORE THAN MY NEW SAUDI ARABIAN SPONSORSHIP***”

Yeah, yeah, yeah – as always, I’m going to cop all sorts of grief for daring to be this honest and critical. But do you know what? I don’t care about that.

To me, the idea that human lives just like mine and yours and the quarantined McLaren guys (and the 300,000 others expected at Albert Park this weekend and the 5 million people who live in Melbourne and the 25 million who live in Australia and the 7.5 billion who live on earth) are ever in the hands of men like Chase Carey is arguably scarier than any virus ever could be.

Why? Because a virus doesn’t know better. Like us, it’s just trying to survive.

I’ve heard plenty of times today that this is the darkest day in F1 since Indianapolis 2005. But it’s actually nothing like that at all. 15 years ago, the fans were booing because Michelin didn’t want a driver to be smeared all over a concrete wall, and the wreckage of his fuel-powered missile smashed into the soft bodies of those same booing fans.

That race was an embarrassing farce BECAUSE OF SAFETY. But, unforgivably, Melbourne 2020 was a travesty for exactly the opposite reason – precisely because safety was a last-minute after-thought that almost got forgotten about completely.

Worse than that, Carey and Todt’s respective organisations have been crowing about needing to pay attention to the coronavirus for weeks, and all apparently “to help protect the global motorsport community and the wider public”. What nonsense.

When it came to the crunch, they did NOTHING. If Wolff hadn’t called it off unilaterally, the Coronavirus Grand Prix may still be on. And that would be unforgivable.

We all love F1 because it’s risky. Once the mechanics have doubled checked the wheel nuts, we love watching these guys take Eau Rouge flat, and we don’t even mind risking our lives standing there to see it. But we do so on the quiet proviso that those with a duty of care have DONE THEIR JOBS.

F1 2020: For now, this dog and pony show is OVER. Chase Carey was learning the most valuable management lesson of his life in real-time, he should immediately go.

[Note: The opinions expressed on this website are those of the authors and do not purport to reflect the opinions or views of GrandPrix247, staff or partners.]