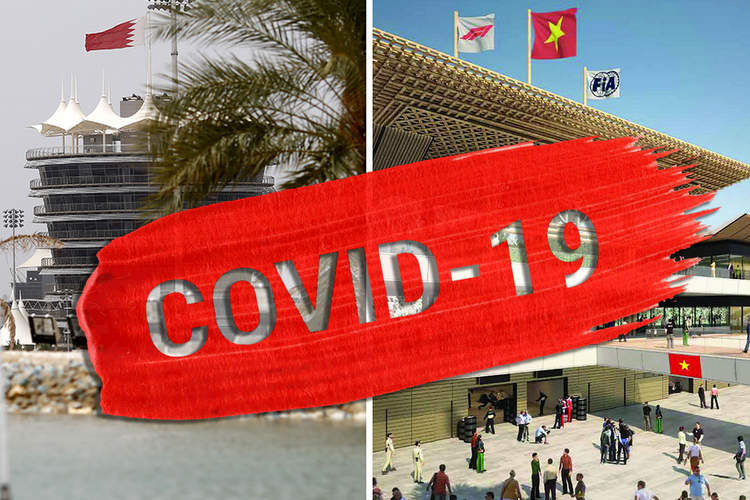 Formula 1 has postponed the Bahrain and Vietnamese Grands Prix after the cancellation of Sunday’s Australian season-opener due to the coronavirus outbreak.

While the Bahrain and Vietnam rounds were expected to be dropped, a report by RaceFans suggests that the Dutch Grand Prix will not happen on 3 May, they wrote: “The is understood to be because the Dutch Grand Prix is preparing to announce it intends to reschedule its race for later in the season if a date can be found.”

“The Bahrain and Vietnam Grands Prix have been postponed due to the continued global spread of coronavirus. The races had been set for March 20-22 at the Bahrain International Circuit in Sakhir, and April 3-5 at the recently completed Hanoi Circuit.
The news follows the cancellation of this weekend’s season-opening Australian Grand Prix, and the previous postponement of the Chinese Grand Prix, which was due to be held April 17-19.
Formula 1 and the FIA say they will continue to work closely with the race promoters in Bahrain and Vietnam to monitor the situation and study the viability of potential alternative dates for both races.
They also state that they expect the 2020 championship is expected to begin in Europe at the end of May – but this will be regularly reviewed.”

In consultation with our international partners and the Kingdom’s national health Taskforce, Bahrain has made the decision to hold this year’s Bahrain Grand Prix as a participants-only event.
As an F1 host nation, balancing the welfare of supporters and race goers is a tremendous responsibility. Given the continued spread of Covid-19 globally, convening a major sporting event, which is open to the public and allows thousands of international travellers and local fans to interact in close proximity would not be the right thing to do at the present time. But to ensure that neither the sport, nor its global supporter base, is unduly impacted, the race weekend itself will still go ahead as a televised event.
Bahrain’s own early actions to prevent, identify and isolate cases of individuals with Covid-19 has been extremely successful to date. The approach has involved rapid, proactive measures, identifying those affected by the virus, of which the overwhelming majority of cases relate to those travelling into the country by air. Aggressive social distancing measures have further increased the effectiveness of preventing the virus’ spread, something that would clearly be near impossible to maintain were the race to have proceeded as originally planned.
We know how disappointed many will be by this news, especially for those planning to travel to the event, which has become a cornerstone event of the international F1 calendar, but safety has to remain our utmost priority.

In view of the continued global spread of novel coronavirus and after ongoing discussions with Formula One World Championship Ltd – the holder of copyrights and licenses for Formular 1 (Formula 1) – as well as the Federation Internationale de l’Automobile (FIA) & the Hanoi People’s Committee, the Vietnamese Motorsports Association (VMA), the Vietnam Grand Prix Limited Liability Company (VGPC) regrets to announce the postponement of the Formula 1 VinFast Vietnam Grand Prix 2020 as scheduled.
Due to take place on April 3rd – 5th, the decision to postpone comes after extensive consideration of the ongoing and developing coronavirus situation as well as after the recent WHO declaration of the outbreak as a global pandemic, and follows guidance from all relevant authorities whose collective concern is the health and well-being of the Vietnamese people as well as travelling Formula 1 fans, staff and championship participants.
This has been a very difficult decision to reach, especially as preparations for Hanoi to join the world’s most prestigious sporting event with a world-class, state-of-the-art Formula 1 circuit had just entered their final stages.
VGPC will continue to work closely with Formula 1, the FIA, the Hanoi People’s Committee and the VMA to monitor the situation and will look to announce an alternative date and provide a further update for our ticket purchasers, sponsors and partners in due course.
Our thoughts go out to all those directly and indirectly affected by the current coronavirus situation, as well as those for whom this announcement will be a disappointment as they looked forward to an exciting inaugural race in Vietnam.
In the meantime, we would like to thank all our supporters, customers and fans for your understanding and hope to welcome you to the Hanoi Circuit in the very near future.

“The global situation regarding COVID-19 is fluid and very difficult to predict and its right we take time to assess the situation and make the right decisions. We are taking this decision with the FIA and our promoters to ensure the safety of everyone involved in Formula 1 and our fans. The Bahrain Grand Prix is an exciting race in our schedule, and we look forward to being back there as soon as we can. We are also looking forward to Vietnam’s inaugural race and bringing the spectacle of F1 to one of the most exciting cities in the world.”

“Protecting people first. Together with Formula 1, the Bahrain Motor Federation, the Vietnamese Motorsports Association, and the local promoters, postponing both the Bahrain and Vietnam Grands Prix, as with the Australian Grand Prix, was the only possible decision given all of the information currently available to us. We continue to rely on the input and advice from the World Health Organisation (WHO) and governments and will work with them throughout this unpredictable period to safeguard the fans, competitors and all of the motor sport community.”

Bahrain’s March 22 race, the second on the calendar, was already scheduled to be run without spectators. Vietnam’s first F1 grand prix was scheduled for April 5 in Hanoi as the third round of the season.

In Melbourne, media and F1 support workers are already heading home as they try and reschedule flights while a number of drivers have headed home, as opposed to their next destination Bahrain, with assurances that the race in that country, next weekend, and the Vietnam race won’t be happening.

Setting a date for the season to start is useless as the COVID-19 global landscape is altering hourly as countries implement increasingly stringent travel restrictions while cancelling public gatherings.

Sources said F1, which has already postponed the April 19 Chinese Grand Prix, was set to make an official announcement in due course.

Meanwhile, Auto Motor und Sport’s Toby Gruner reports on Twitter: “Teams agree to place race staff in quarantine until March 29. Cancelled races could be held during summer break. If necessary the season could be even extended to 2021. Next-generation F1 cars might be postponed to 2022 in that case.”

The report adds that Haas team boss Guenther Steiner said, “The cancellation of the Chinese Grand Prix already hurts the teams. Now losses from Australia, Bahrain and Vietnam could also be added.”