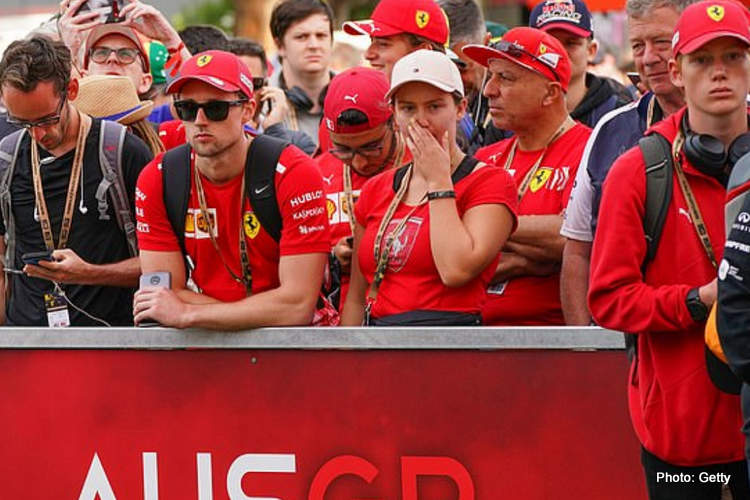 Australian Grand Prix boss Paul Little insists the Formula 1 season-opener is going ahead despite multiple reports the race will be cancelled due to coronavirus as total confusion reigns on the ground in Melbourne.

Already, the McLaren team has withdrawn from the event after a team member tested positive for coronavirus.

Despite widespread media reports overnight that the race won’t proceed, Little told the Nine network on Friday that the grand prix is going ahead. But Victorian Premier Daniel Andrews said on Friday fans won’t be allowed to watch the race from the circuit.

Spectators queue at the gate to gain entry ahead of the Formula One Australian Grand Prix 2020 at the the Albert Park Circuit in Melbourne on Friday – despite speculation the event will go ahead or if fans will even be allowed in.

‘I want to make the point that any other chains to any mass gathering or large event will be based on a supervise the chief health officer,’ he said.

‘That’s been communicated to Grand Prix organisers. Now they are making the choice between no event or an event without fans. But at the very least, there will be no fans at the Grand Prix this weekend.’

There was confusion at the Albert Park Circuit in Melbourne on Friday morning as spectators and team members began to arrive amid mixed reports about the event.
It has also been reported that Sebastian Vettel and Kimi Raikkonen have already flown home to Europe.

Eight F1 team members had been tested for coronavirus with results released on Thursday revealing one, from McLaren, had tested positive to the potentially deadly virus.

McLaren subsequently withdrew from the event, due to start on Friday with practice sessions for Sunday’s grand prix.

‘The decision has been taken based on a duty of care not only to McLaren F1 employees and partners but also to the team’s competitors, Formula 1 fans and wider F1 stakeholders,’ McLaren said in a statement.

‘The team member was tested and self-isolated as soon as they started to show symptoms and will now be treated by local healthcare authorities.

‘The team has prepared for this eventuality and has ongoing support in place for its employee who will now enter a period of quarantine.’

Overnight, the BBC and Sky Television Association reported the race would be stopped after a crisis meeting between F1 hierarchy. A number of team owners were reportedly unhappy to continue the event.

There has been no official confirmation from F1 or the sport’s governing body, the FIA who are coming under increased criticism for their handling of the crisis.

#F1 Pack it up, pack it in, let me begin……. just now, as photographed by @Racingnews365 . Renault still in hotel. Ferrari, Mercedes and McLaren nowhere to be found. #MsportXtra pic.twitter.com/zZLnrKMxwe