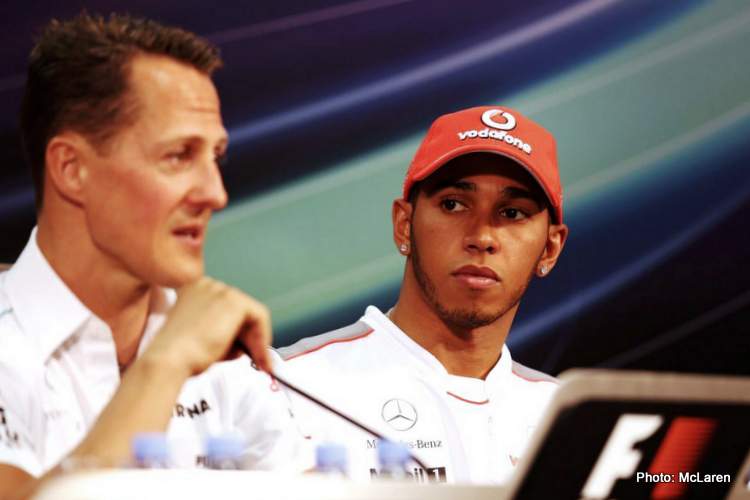 However, as things stand Webber thinks there is “no question” Hamilton is a legend of the sport, and perhaps even already ahead of the legendary German in terms of pure racing.

“I think he went about those results in a technically cleaner executed way, just by the way of wheel-to-wheel combat and no real trickery in his contracts with the other drivers.

“I think he’s certainly up there. I mean, obviously Alain Prost, where do you go with the [Niki] Laudas, the [Jackie] Stewarts, or [Ayrton] Senna?

“Clearly Michael is absolutely in there, he’s got all the records in terms of championships and race victories, but I’m confident that Lewis can give those a red hot go.”

Branding Hamilton’s partnership with Mercedes a “frightening proposition” ahead of the season opener this weekend in Melbourne, Webber lavished further praise on the 35-year-old Briton, with whom he competed for the 2010 driver’s championship, although it was ultimately won by Sebastian Vettel.

“On the track he is Nadal- and Federer-esque. He just executes, and he does it in a way that is very, very clinical.

“He doesn’t go to the stewards often; when was the last time he was done for speeding in the pit lane?

“He’s got so much mind management, and composure – [he’s an] extraordinary, extraordinary talent now, and he keeps reinventing himself, so [he] deserves everything.”