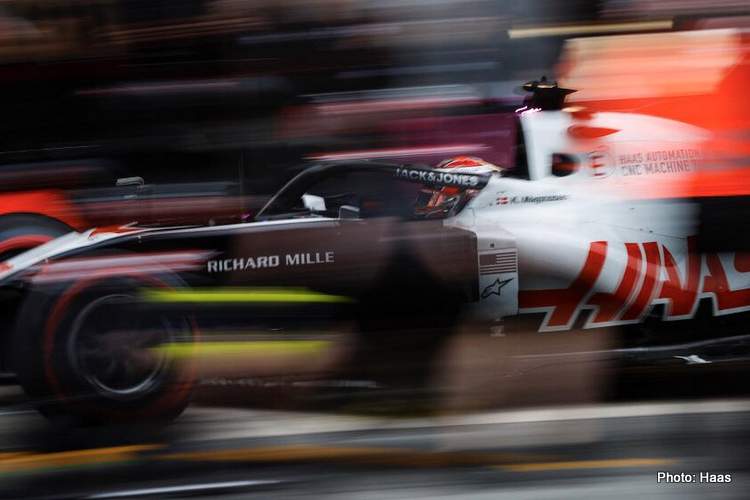 The FIA Formula 1 World Championship is celebrating its 70th anniversary in the 2020 season and Haas F1 Team is ready to get the long-awaited new season underway commencing with the Australian Grand Prix, in Albert Park, Melbourne.

Pre-season testing provided the opportunity for Haas F1 Team to gather plenty of data and understanding from its 2020 Formula One car, the VF-20. Veteran racers Romain Grosjean and Kevin Magnussen – forming Haas F1 Team’s driver line-up for a fourth successive season – collaborated to complete 676 laps (3146.78 km) of the Circuit de Barcelona-Catalunya across six days of testing (Feb. 19 to 21, Feb. 26. to 28), allowing everyone to get back into the rhythm ahead of a potentially record-breaking season.

The first of 22 planned stops on the 2020 FIA Formula One World Championship calendar will be at the Melbourne Grand Prix Circuit, a street-based layout that incorporates the sweeping curves of the leafy Albert Park, located in the southern suburbs of Victoria’s state capital.

The 16-turn 5.303km-long (3.295-mile) circuit leaves little room for error due to the gravel traps and walls that line the edge of the tarmac while the track evolution through the weekend is high due to the infrequent use of the venue, posing a stern first test for teams and drivers alike.

For Magnussen Albert Park marks a return to the scene of his sensational debut in 2014, when the fresh-faced Dane stunned the Formula One paddock by lining up fourth on the grid, from where he charged to a maiden podium, classifying second in the race. It was one of the rare occasions in which a debutant went home with silverware and the achievement has not since been replicated.

And in terms of sensational debuts then Haas F1 Team’s very own first foray into the world of Formula 1 remains a piece of history. Grosjean scored sixth place in 2016 to pick up eight championship points that proved the catalyst for a fine rookie campaign for Haas F1 Team. Last season Magnussen mirrored that result to start the 2019 campaign on a positive note.

The Australian Grand Prix will take place across March 13 to 15, with two practice sessions on Friday, final practice and qualifying on Saturday, and the 58-lap season-opening race on Sunday. Lights out is scheduled for 16:10 local time (00:10 EST / 05:10 GMT).

Having had time to reflect, what are your thoughts on the condensed six day test format hosted at Circuit de Barcelona – Catalunya and given the levels of reliability showcased, could you see further cuts to testing in the future?
GS: “I think six days worked out pretty well. At this time, I don’t see the need to cut it even less, should you have a problem you wouldn’t recover. With six days, if you lose one, you’ve still got five at least. It gets tight if you cut to fewer days than that. We’ve seen that we’ve all improved our reliability, maybe we just got lucky, but next year we’ll see where that goes. For sure though, we all arrived well prepared and everybody just did the same job in six days that we used to do in eight. I would definitely stick with six.”

While teams often state they don’t know where they stack up following pre-season testing – what specifically do you know after six busy days accruing laps in Spain with the VF-20?
GS: “One thing is sure this year, in terms of what we can see after testing, is that the midfield is very tight. I can’t say where we stack up in the midfield, maybe somebody else can, but it’s very difficult to predict. We’ll just find out when we go qualifying in Melbourne.”

Looking into Haas F1 Team’s results at the Australian Grand Prix it’s a blend of extreme highs – notably the famed sixth place finish for Grosjean on the team’s debut in 2016, and frustrating lows – double retirement in 2018. All that combined with the event being the first time each new car truly races, what emotions do you go through arriving in Melbourne and as the weekend unfolds?
GS: “Melbourne is always the unknown for me. We’ve had fantastic results there and we’ve been on our way to some strong results before we messed up. We’ve really had a little bit of everything there. I always like to go to Melbourne, even with the mixed results. I always find it an interesting race; you never know what you’re getting out of it.”

Melbourne is celebrating its 25th anniversary as a Formula One venue – what is it about the race, in your opinion, that’s been the key to its longevity and what moments stand out for you from Melbourne’s Formula One heritage?
GS: “I think it’s fantastic that Melbourne’s celebrating 25 years. It’s an event that’s well executed and well planned. The people are very welcoming and it’s a fantastic location. It’s one of my favorite events on the calendar. With it being the first event of the year, the excitement level is always high, as are the expectations. The moment that obviously stands out, for me at least, is our sixth-place finish there in 2016 – our first season in F1. Nobody believed in us, or that we could pull off a result like that, but we did it. Melbourne, for me, will always be a great event.”

Reflecting on testing, and the fact it was two days shorter than previous years, what was the impact of that condensed running on your test preparations?
RG: “I thought it was both interesting and exciting. We had a lot of laps to do in a short amount of time. On my first day of testing I did 158 laps of driving and I certainly felt it in my body a little bit. It’s also good after the winter to get a lot of mileage done. I did enjoy the condensed element.”

How much input do you as a driver have in setting the test-plan for each day and does that evolve over the pre-season test based on your time accumulated in the new car?
RG: “First of all, we have to discover the new car. We have to try to see what the positives and negatives are. Then we work on the test program. Obviously, it’s going to evolve a little bit over the running days, subject to any issues we have and the time of any changes, as well as how much running we want to do. It’s really a team effort between the engineers and the drivers to see what the best thing is to do and what we want to test to be ready for the season.”

The Australian Grand Prix hasn’t rewarded you particularly well over the years – the notable exceptions being 2016 and an incredible sixth-place finish on Haas F1 Team’s debut, along with five top 10 qualifying starts. What are your thoughts on the Melbourne Grand Prix Circuit and why the race has produced mixed results for you over the years?
RG: “I love the Albert Park circuit and I love Australia and the city of Melbourne. To me it’s one of the best races of the season. I’m happy to go down to Australia every year. I’ve had some good qualifying sessions there, I’ve always been pretty much in the top 10, with a couple of exceptions. The races, yes, my luck hasn’t been good in Australia. I’ve got the feeling things will be different this year and I’m looking forward to it.”

Melbourne is celebrating its 25th anniversary as a Formula One venue – what’s your first memory of watching Formula One in Melbourne, and other than your own personal highlights there, what other moments in Formula One stand out for you from Melbourne’s heritage?
RG: “I don’t remember a lot of races from Melbourne, I guess because of the time difference when I was younger. I do remember, I think it was Sebastien Bourdais’ debut, every car was dropping out and he got into the top six. He didn’t even finish the race, he retired something like two laps from the end but was still classified in seventh. Australia in the past has always been quite entertaining because cars were having issues and the reliability was not as good as it is today. There were always a lot of retirements and so you never really knew what to expect. For me though, 2016 is the one memory that stands out.”

Reflecting on testing, and the fact it was two days shorter than previous years, what was the impact of that condensed running on your test preparations?
KM: “To be honest, it didn’t really feel like much of a difference. I still got plenty of time in the car even though I missed half a day in week one when we had the wheel failure. I feel ready for the start of the season.”

How much input do you as a driver have in setting the test-plan for each day and does that evolve over the pre-season test based on your time accumulated in the new car?
KM: “I have some input, but I largely leave it up to the engineers to figure out what they need to test. I then try and do a consistent job in the car and learn what I can while I’m driving. Of course, lots of the testing done in pre-season is not so relevant for you as a driver, but ultimately you do benefit from the learning process being worked through. As a driver your preference is to do things like race and qualifying runs non-stop but obviously that’s not productive. I feel like we got some good stuff out of winter testing this year.”

The Australian Grand Prix has proved to be a happy hunting ground for you – notably scene of your first career podium on your debut in 2014, and last year’s season’s best sixth-place finish. What is it about the Melbourne Grand Prix Circuit that seems to work for you – is it simply a track that suits your particular driving style?
KM: “I don’t actually think Albert Park suits my driving style, but that said, it’s not a track I dislike at all, I do like driving the circuit. It’s a pretty normal track for me and I think I’ve just been fortunate to have had good races there. I can’t really point out any reasons why Albert Park should be any better for me than other tracks. I think it’s just coincidence I’ve had good races there. Of course, when you have had good races at circuits, you always look forward to going back because those good memories create a good vibe. I guess you feel a little bit more excited going back to those tracks.”

Melbourne is celebrating its 25th anniversary as a Formula One venue – what is it that appeals to you about the track and the city?
KM: “It’s obviously long been associated with being the season opener, which gives it a buzz and a certain excitement level. For me, it’s one of the best races of the year because of that, and everyone’s excited to see where they are and go racing for the first time in the new season. I like Melbourne as a city as well, I enjoy going there.”