Vettel: There’s things that I know I can do better 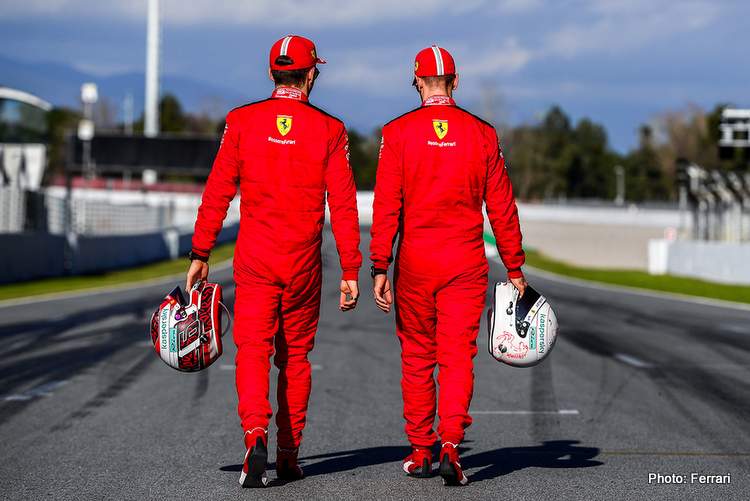 Sebastian Vettel has vowed to learn the lessons from last year – and maybe the two years before that – and come back stronger in the 2020 Formula 1 World Championship season.

After finishing a disappointing fifth overall – 173 points behind champion Lewis Hamilton – Vettel’s pride was hurt. Even more so because the four-time F1 champion’s junior teammate, Charles Leclerc, finished fourth in his first season with Ferrari and only his second in F1.

While youthful Leclerc was bringing some “wow” factor back to Ferrari with his speed, it was a case of “Oh, no!” at some of Vettel’s errors.

“There’s things I can do better that I know I can do better. That’s the first thing I look at and obviously try to improve,” Vettel explained. “It’s always in the details, small adjustments, nothing big or major. I don’t need to drive differently, I know how to drive.”

It’s a familiar refrain from Vettel, playing down mistakes when he makes them and then broadly putting it down to a learning experience.

The German driver said much the same last year, and the year before that. After surrendering championship leads in 2017 and 2018, he missed out on a fifth world title as Lewis Hamilton overtook him to win both.

Hamilton is on track to equal Michael Schumacher’s F1 record of seven titles. When Vettel won his fourth drivers’ championship in 2013, Hamilton was stuck on one title and most observers tipped Vettel to challenge Schumacher’s mark.

But since winning 13 races in 2013 – when Hamilton won once with Mercedes – Vettel has won only 14 races compared with 62 for Hamilton.

The Australian Grand Prix kicks off the season in Melbourne this week.

Vettel’s title bids were undone by uncommon errors for a driver of his experience, particularly because he wasn’t under pressure.

A crash from pole position in Singapore in 2017, and a shunt into the barriers when leading the rain-soaked Germany GP in 2018.

The mistakes rolled over into 2019: spinning on the track in Bahrain and at Ferrari’s home GP in Monza, and a collision with the Red Bull of Max Verstappen at the British GP.

“I’m honest enough to admit that I should have done a better job,” Vettel said. “Clearly I look at myself first, address all the points that I feel need to.”

Vettel insists on striving to learn, but repeated words do little to soften the impression that Vettel got worse last year.

He was not even able to challenge Hamilton and was upstaged by Leclerc, who excelled during a dazzling midseason spell of eight podiums from 10 races.

Winning at Monza, Leclerc defied his youth by brilliantly holding off Hamilton to give Ferrari its first win since 2010 at its spiritual home.

“It was probably the best day of my life,” he said.

Leclerc had a better record in qualifying and the one race Vettel won – the humid night race in Singapore – followed a strategy decision which effectively moved Leclerc down from first to second place. It was a decision Leclerc didn’t understand.

At the Russian Grand Prix in Sochi, Vettel didn’t let Leclerc back past him despite a team agreement. Vettel seemingly felt aggrieved that Leclerc had similarly reneged on him in qualifying for Monza.

The 32-year-old Vettel held the No. 1 status courtesy of his experience. Yet at times it was glaringly evident that Leclerc was driving much better.

The power struggle between frustrated successful veteran and gifted young usurper culminated in an ugly crash at the Brazilian Grand Prix in November, when Leclerc moved swiftly inside to overtake Vettel, who tried to reclaim his position with a move on his teammate’s flank.

Wheels touched and punctured, sending both cars out. Bashed cars and bruised egos led to each driver yelling “What the hell?” on team radio.

Two Ferraris failing to finish the same race irked the famed Italian team’s hierarchy. It led to apologies from both drivers – to the team, not to each other – and Binotto assuring it would never happen again.

This is the last year of Vettel’s existing contract with Ferrari and the challenge from an even hungrier Leclerc might be stronger still, given he’ll have equal status.

“I think that he has already proved to be ready,” Binotto said, adding that team orders could only be used in the right circumstances. “I think it’s right that they are on the same level to start the 2020 season. I think they know as well that the team has the first priority.”

Even if Vettel beats the 22-year-old Leclerc, there’s still the business of catching Hamilton. It promises to be a make-or-break year for Vettel, who will likely need to add a few more wins to his career tally of 53 if he wants a new contract with the team.