Russell: Latifi is the most prepared rookie F1 has ever had 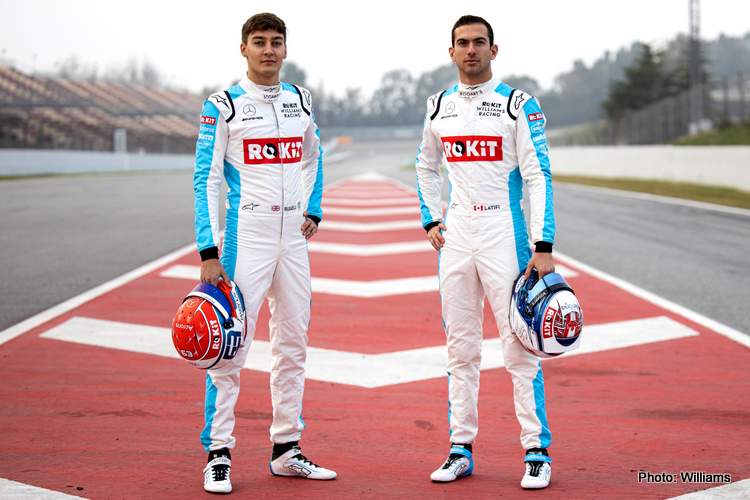 Nicholas Latifi will be in a class of his own when the Canadian makes his Formula 1 race debut with Williams at the Australian Grand Prix in Melbourne on 15 March.

Despite driving for the last-placed team of 2019, and barring any driver switches during the course of the campaign, the only newcomer on the 2020 F1 starting grid already looks a winner of sorts.

“He is rookie of the year, right?” joked deputy team principal Claire Williams.

The Montreal-born, Toronto-based, Iranian-Canadian has graduated from Formula Two, where he was runner-up last season, but the 24-year-old already has years of F1 experience.

Reserve driver for Williams last year, he has taken part in 11 free practice sessions and tested in the past for Renault and now-defunct Force India, a team reborn as Canadian-owned Racing Point.

There were also some private sessions in Mercedes Formula 1 machinery.

“He’s probably the most prepared rookie F1 has ever had, almost,” commented teammate and 2018 F2 champion George Russell, a Mercedes-backed driver who had also driven plenty of F1 cars before he arrived in 2019.

“He’s incredibly prepared. And he’s going to be a tough driver to beat, so he’s going to keep me on my toes. I’ll be pushing. On paper, he’s a rookie, but the reality is he’s not, and he’s definitely going to be tough to beat. So I’m ready for the challenge and looking forward to the battle.”

Latifi spent more than four years in GP2/Formula Two, unlike Russell who breezed to the title at the first attempt in a field that included current McLaren driver Lando Norris and Red Bull’s Alexander Albon.

Last year the wealthy businessman’s son won four races, finished second three times and had one third. It was no surprise when he replaced departed Pole Robert Kubica at Williams.

“The fact that I’m the only rookie, it doesn’t really change much for me to be honest,” said Latifi, who races with a U.S. licence and the number six in a nod to Toronto’s telephone area codes of 416 or 647.

“I have raced against quite a lot of the other guys on the grid, probably over half the grid, so from that sense it’s not all new to me. It’s not like jumping into something unknown. The fact that I’m the only rookie is just what it is. I definitely feel as well prepared as I could be.”

Latifi is a known quantity through testing but just how good he will be in race conditions and compared to his highly-rated teammate remains to be seen. Together they are the least experienced line-up of any team.

“We know he (Russell) is going to be quick so he’s going to be a great benchmark for me,” said the Canadian. “I know George is one of the best on the grid so I’m looking forward to see how I fare against that.”

Once-dominant Williams scored just one point last year, and only seven in 2018, but have raised hopes of recovery with more competitive times in testing.

Claire Williams told reporters at the first test that the team understood Latifi as a driver but “until we get to the first few races we’re not going to truly understand where he is from a competitive stance.

“He’s got the right ingredients outside the cockpit certainly, we’ve seen that. He demonstrated them over the course of last year, he’s technically very capable, he’s driven and committed as much as George is,” added the deputy team boss.