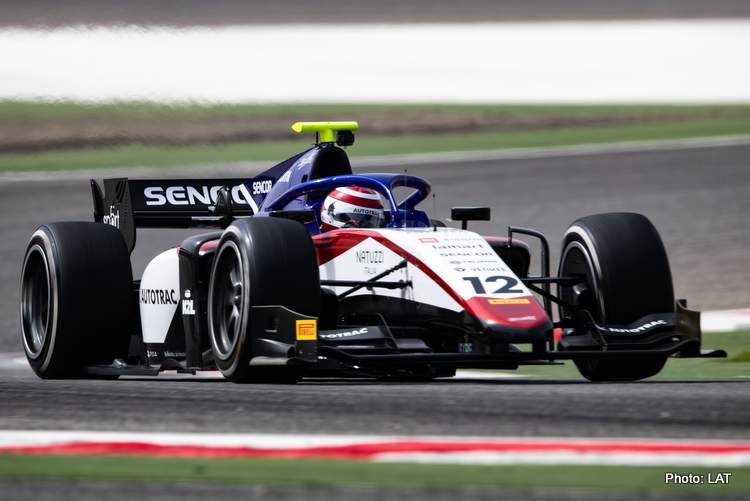 Experience wasn’t a barrier on the first day of pre-season testing, with rookie Pedro Piquet the fastest man in Sakhir on day one of Formula 2 preseason testing at the Bahrain Grand Prix venue.

The Charouz driver was the only man to break 1:42s, finishing ahead of Nobuharu Matsushita and fellow rookie Jehan Daruvala.

It didn’t take Piquet long to get to grips with the new Pirelli 18-inch tyres either, as the Brazilian set an instant impression amongst the new-look F2 field with the morning’s first fast time, taking the lead with 1:44.331.

A large chunk of the field opted to remain in the garage for much of the early stages, with a flow of short runs providing the teams with valuable data to work on. Matsushita was the man to take control of those runs, thumping around in less than 1m 43s to claim an early advantage, with Felipe Drugovich lining up behind him in the second MP Motorsport machine.

Louis Delétraz is known for his invaluable ability in testing and had dominated the post-season sessions in Abu Dhabi with Charouz. He continued in the same vein in Bahrain, overtaking his former teammate for top spot with a tour of 1:43.583.

Returning for the first time from a leg injury sustained in training at the end of last year, Jehan Daruvala impressed in his debut F2 stint, propping up the leading duo in third, half a second behind.

At the start of second session, it was once again the dominant force of Delétraz who set the early standards, before being usurped by Callum Ilott in the UNI-Virtuosi machine. Their running was briefly halted as Nikita Mazepin spun on track and caused a red flag, after battling for track position with Dan Ticktum.

When they resumed, Marcus Armstrong broke the quickest time from the morning to take control of the standings, but Delétraz simply upped his game and retaliated by taking the times below 1m 43s for the first time.

For much of the grid, focus shifted onto long runs and Delétraz was left on his own out in front. Squeezing in between him and ART Grand Prix substitute Sergey Sirotkin in the top three was Carlin rookie Yuki Tsunoda, who impressed in his first pre-season tests.

With 45 minutes to go, faster laps began to pile in and Delétraz was usurped by Matsushita in his new MP Motorsport machinery. The Japanese racer nearly broke the 1m 42s barrier, running just seven-tenths over. Armstrong didn’t quite reach the duo in first and second with his next fast run and sat third behind them, as Tsunoda fell to fourth.

Their fast laps were followed by the continually impressive Daruvala, whose time was good enough for second, ahead of Sean Gelael. These were broken up by a red flag as Luca Ghiotto stopped on track.

When the running recommenced, Piquet ended the day as he started it, at the top of the times. The Brazilian was the only racer to break the 1m 42s mark and finished ahead of Matsushita, Daruvala, Roy Nissany and Armstrong. Just behind them was Tom Dillmann, who replaced Marino Sato for the afternoon session. Delétraz, Artem Markelov and Tsunoda completed the top ten.

After an intriguing first day of testing and exciting first run on the 18-inch rims, teams will return for Day 2 even stronger, packed with more knowledge and expertise. 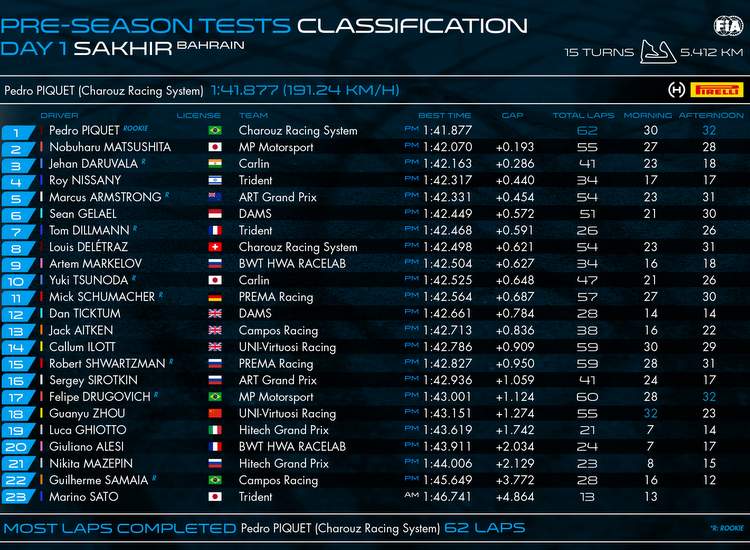