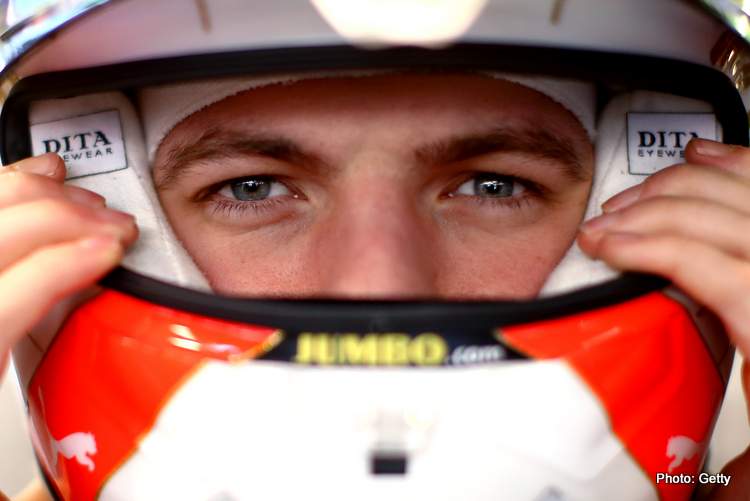 Last hour of Formula 1 pre-season testing at Circuit de Barcelona-Catalunya would be good I figured, surely somebody was going to unleash some wicked laps to end the test with a signal to their rivals and with F1TV coming at me live, I was riveted with popcorn in hand.

First, Valtteri Bottas and Mercedes bobbed-and-jived before going out and delivering nothing. His top time was good for best of the day but was hardly remarkable. He was almost half a second slower than the pace he showed a week earlier. That time of 1:15.732 was the best of the six days in Spain.

During the final half-hour of running on Friday, Max embarked on a run with Pirelli C4 (second softest compound) tyres bolted on; he duffed the first lap but then popped into second on the timing screen with his last flyer on the same rubber.

In he came and on went another shiny set of C4s. the crew looked all racy and fired up, it was clear Max was going for the headlines with his final run. Hearts pounding even miles away in Berlin.

Indeed, he was green through the first sector but went yellow in the next one before recovering in sector three only to come off the throttle as he went past the pits. It was a hoax!

Or was it? Clearly the RB16 with its Honda PU is a choice piece of kit, appearing to tick all the boxes. But is it maybe too finicky when on the edge, where their drivers have to play, when it really matters?

While expectations are high that the Blues will be squarely in the mix and making life difficult for Mercedes this season, it seems that Newey’s latest creation is handy out the box, but not quite plug-and-play as yet or they get the Oscar for the best sandbagging show seen this past week.

Thus, for me it was an anticlimactic end to an otherwise enigmatic test. I expected more, some fast laps to keep the tongues wagging, posturing of sorts, some sabre-rattling. After all this is the curtain-raiser to the real thing, spice it up for us with a couple of mesmerising runs.

I struggle to make sense of what we saw but take comfort in knowing I am not alone. The graphic below shows only Kimi Raikkonen and Sergio Perez had their PU dialled up and, that, only briefly. 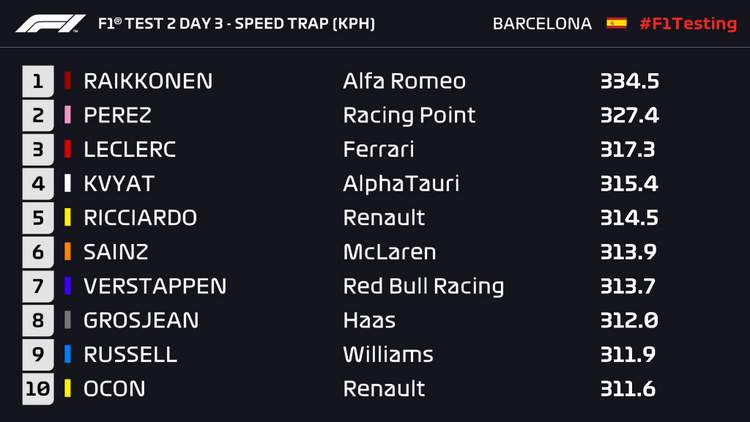 Consider that fully blown in qualy last year the speed-trap had Charles Leclerc fastest at 325 kph, while last year this time Lando Norris recorded the top speed in the Renault-powered McLaren of 337 kph.

Mercedes are not even in the top ten (above) which is a definite sign of powder-kept-dry by the World Champions who know they will be quicker than Racing Point, who are not too shabby at this stage of play with their replica Merc.

While Raikkonen, with customer-power, gives a hint of the horses that Ferrari have in their package, in other words, add another 20 kph to Charles Leclerc’s top speed and that’s more like it.

One would imagine, Honda have at least another dozen kph to unleash (they did last year during qualy in Spain last year) while Renault… who knows with them?

More than ever before (that I can remember) a pecking order is impossible to ascertain ahead of Australia in a couple of weeks time. But then last year we all thought Ferrari were Testing-World-Champs and it turned out we were all hoodwinked by a more than well-prepped Mercedes who when unplugged were devastatingly effective.

This year there is not even a hint of who is where, but I will stick my neck out and say Mercedes have another superb weapon for this campaign; Ferrari will surprise and get their act together and be closer to the pace-setters earlier than they were last year with Red Bull, Max in particular, the joker in the pack.

For my feel-good prediction, I am buying into the Racing Point hype and say the replica-Merc will finally add pink to podium celebrations this year.

For my doom-and-gloom prediction, I am sticking to my suspicion that Renault will be rubbish and, because of that, McLaren will suffer but now appear to have the depth to make the most of their last season with French power.

Peering through the haze of misinformation and disinformation, this is what I deduce from testing:

There is no proof these assumptions of mine will become fact, I am no Nostradamus but rather it’s the logic that emerged from an illogical week. In the end, the truth will be revealed on Saturday afternoon, 14 March when it’s all maxed out for Q3 during qualifying for the season opener Down Under.

Finally, back to Max and that final effort this afternoon, I would really like to know: Why not bolt on the fastest C5s? Did he lose it or did he back out of it? If the latter, why? Bring on Melbourne! 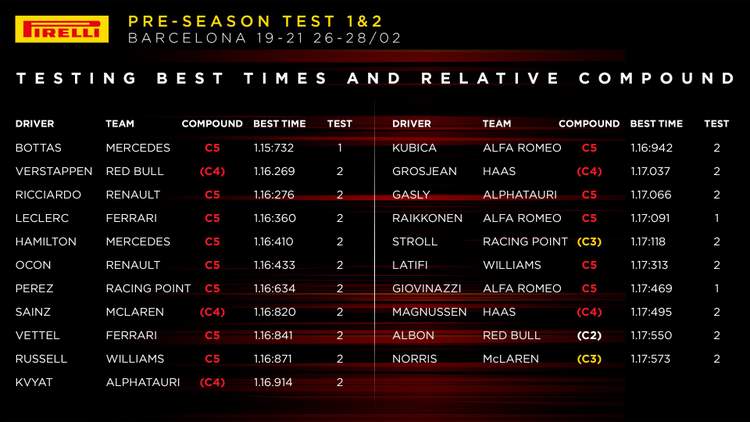