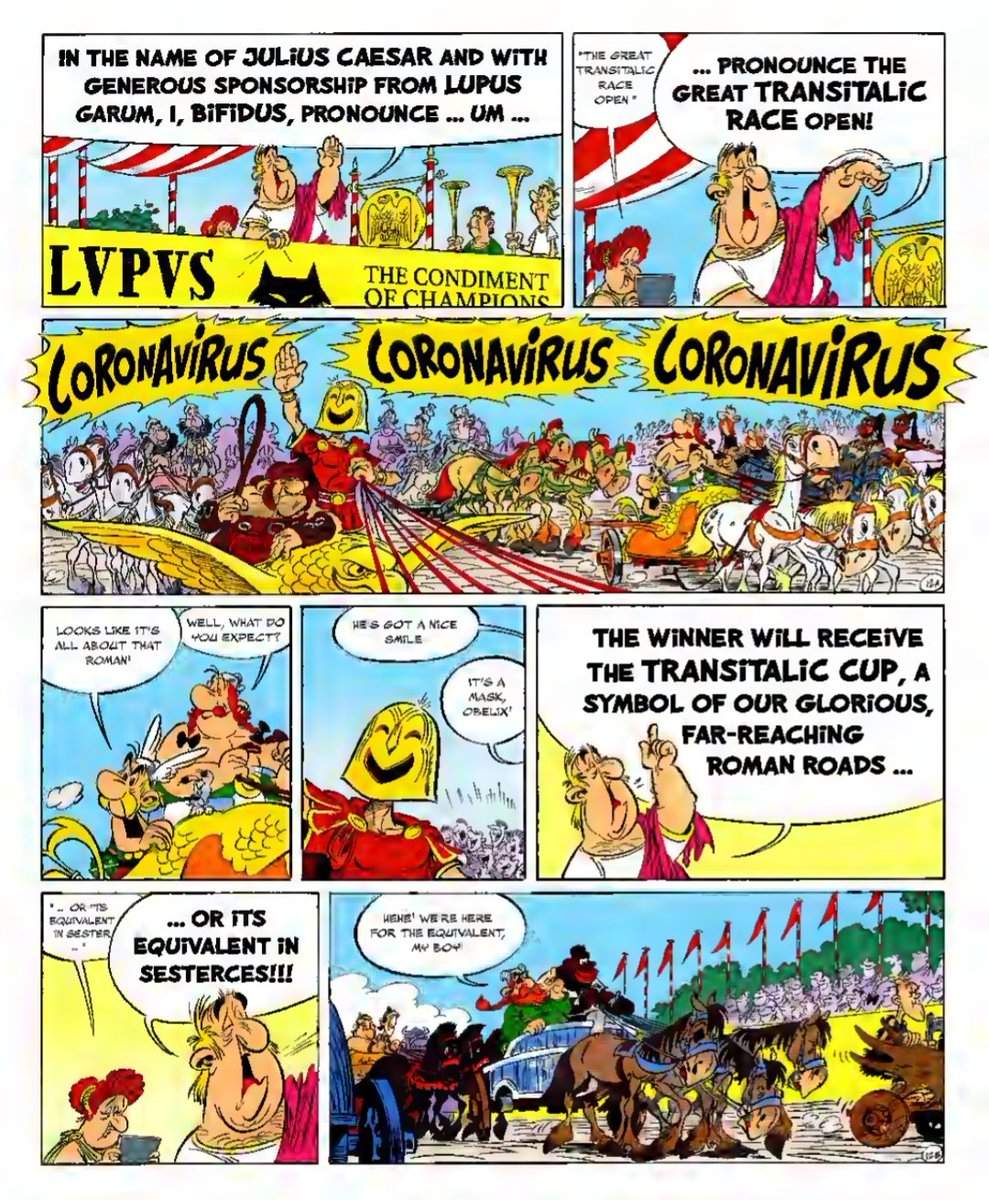 There is an Arab word, maktub. In essence, it means ‘it is written’, or that there is a certain destiny in life.

So it seems that maktub has seldom rung so true as in the 2017 book Asterix and the Chariot Race, where not only is the character of the famous Roman masked charioteer called ‘Coronavirus’, but he is modelled on none other than Alain Prost, while his the tycoon sponsor Lupus is based on Silvio Berlusconi!

The 37th book in the Asterix series and the third written by Jean-Yves Ferri and illustrated by Didier Conrad was released worldwide in more than 20 languages on 19 October 2017 in an initial print run of 5 million copies. The astounding part of this is that Coronavirus the germ, or COVID 19 was only discovered over two years later in December 2019 and named by the World Health Organization on 11 February this year.

The name was chosen because the virus is genetically related to the one responsible for the 2003 SARS outbreak, but this outbreak has spread like proverbial wildfire to have an increasingly detrimental effect on world affairs with events being cancelled and postponed from soccer matches to rugby tournaments.

Next week’s Geneva Motor Show is the latest to go, cancelled this morning, while the Chinese Grand Prix is indefinitely postponed.

The Australian Grand Prix remains provisionally confirmed too, but fears that the Corona outbreak in Italy and elsewhere may yet hamper that race going on, let alone many other Grands Prix, other races and who knows how many events.

The seemingly crystal ball of Asterix and the Chariot Race sees Roman Senator Lactus Bifidus propose a chariot race open to all people of the known world to showcase the excellent roads across the Italic Peninsula.

Julius Caesar endorses the race but insists that a Roman must-win for the sake of unity across the Peninsula. A sibyl then predicts that Obelix will become a champion charioteer and the big guy quits his menhir business, buys a sports chariot on credit and enters the race accompanied as ever by Asterix and Dogmatix.

Only five teams make the finish as Asterix and Obelix narrowly beat Julius Caesar, who secretly joined the race replacing race favourite Coronavirus, who quit on discovering that his co-driver had cheated. Caesar almost won the race, but lost a place after striking a pothole…

Whether or not the chariot driver Coronavirus’ name was the work of maktub or a sibyl will forever remain secret, but his title is back and then some as a quite significant pothole for the world in general…