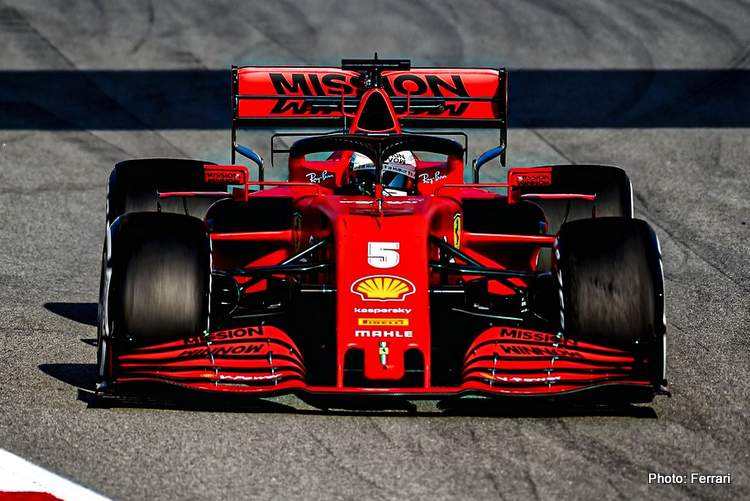 Ferrari will be happy at the end of the second day of Formula 1 preseason testing at Circuit de Barcelona-Catalunya while Mercedes showed a chink in their armour when Lewis Hamilton parked the hitherto bullet-proof W11 with a PU problem.

The Reds needed a good day of running and they got it with Sebastian Vettel pumping in 144 laps in the SF1000 with his morning time of 1:16.841 best of day that started with a wet circuit and dried rapidly as bright sunshine prevailed for the rest of the day, as did the blustery wind.

Another spin at Turn 5 🚨

Vettel is the latest driver to go off after testing the limits #F1 #F1Testing pic.twitter.com/z5j5LFVCNm

The German also had a spin during the day and something appears amiss as the Reds have either turned down the horses or they have a very ordinary car. On long runs, with Racing Point on track also doing the long stuff, Vettel was lapping at the same pace as Lance Stroll.

It was also a niggle packed day for Mercedes who suffered a failure when Hamilton was forced to park the car on track with a PU Issue. This caused a lengthy stoppage as they recovered the car. Last week they reportedly went through two PUs, suggesting not all is well with the Silver Arrows package.

The powder was clearly being kept dry, with Valtteri Bottas seventh, while Hamilton propped up the bottom of the timesheets with his 14 laps of which the fastest was over five seconds off the pace. Not a good day for the World Champ.

The sharp end revealed little as the expected lap attack by teams and their drivers, on this penultimate day, did not take place. Maybe tomorrow, the final day? Smart money is no one is going to reveal much ahead of Melbourne.

Nevertheless, Pierre Gasly was second fastest for AlphaTauri a couple of tenths down on the top time but sixth tenths up on next best Honda-powered driver, Max Verstappen six tenths down and sixth on the timing screens had an action-packed day which included two spins into the gravel.

Stroll ended the day third and fastest of the Merc-brigade with solid mileage in the Racing Point RP20 which is emerging as the surprise package of the winter testing. Perpetually glum Sergio Perez is sporting a wide grin as he hails the best car of his career.

Williams newbie Nicholas Latifi fourth, and encouragingly only a couple of tenths shy of their fellow Mercedes customers. The Canadian also racked up more laps than any other driver on the day with 158 completed.

Bottas, Verstappen and Vettel all endured a trip across the gravel during #F1Testing #F1 pic.twitter.com/z0YjETHF3t

McLaren’s Lando Norris was fastest of the Renault quartet in fifth, with Esteban Ocon eighth fastest and Renault teammate Daniel Ricciardo 11th. Carlos Sainz sat out the day and will return for the final day of running on Friday for the Woking outfit.

The Spaniard observed while being interviewed by Sky F1 that the track this week is ‘slower’ than it was for the first test, last week, also not helped by the wind.

Kevin Magnussen was ninth fastest in the Haas VF20 with 110 laps on his chart, withe fellow Ferrari powered Alfa Romeo of Antonio Giovinazzi 12th, the Italian spinning during his 91-lap stint on track.

Bumping 💥 into 💥 the 💥 barriers

Antonio Giovinazzi surfed across the gravel during #F1Testing 🏄#F1 pic.twitter.com/qvivKSHcMr 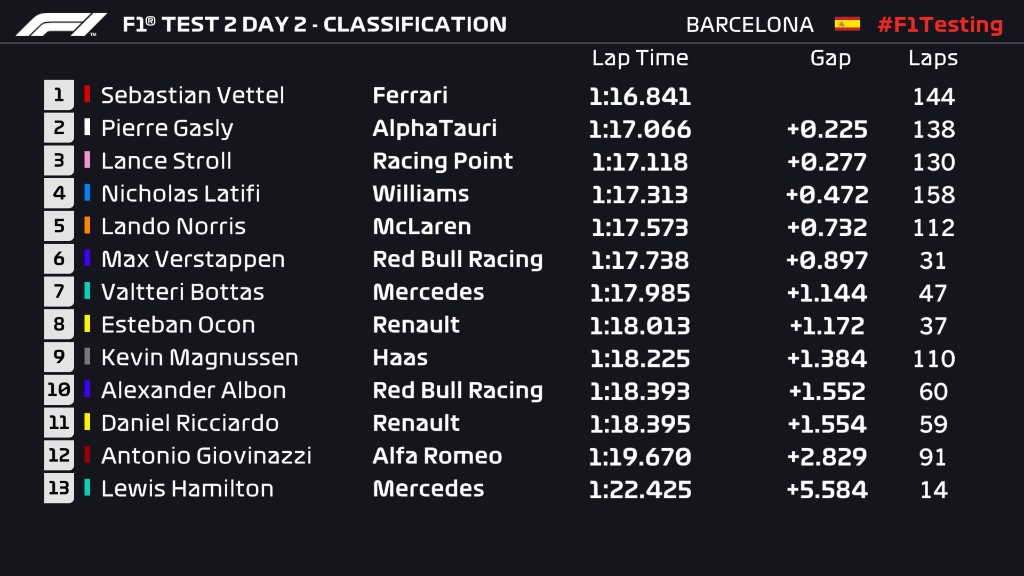