Brown: No place for Alonso in McLaren F1 team 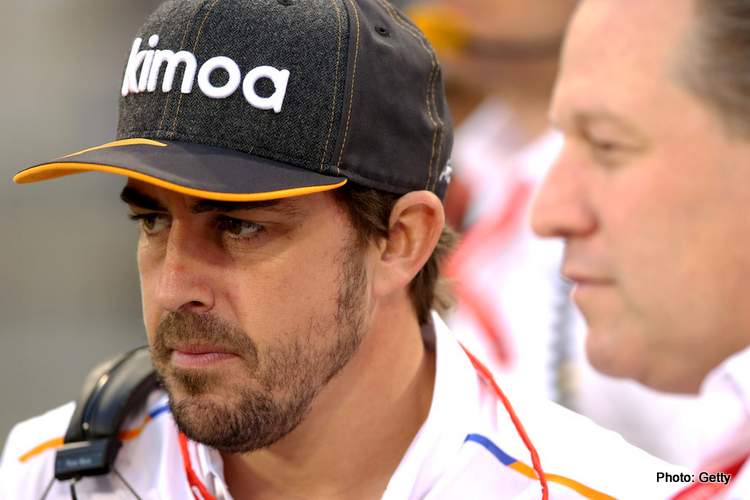 While McLaren have thrown a lifeline for Fernando Alonso to compete in this year’s Indianapolis 500 but, at the same time, there is no way the Spaniard will disrupt the team’s upwardly mobile Formula 1 effort.

Zak Brown has come to the rescue of Alonso’s ongoing Triple Crown dream after it appeared his ambition to race again at the Brickyard would be thwarted as no Honda-powered team could be found for the Spaniard, despite efforts by Andretti Autosport to arrange a car for him.

Word is Honda won’t countenance the driver who ran out of patience with them when he drove for the Woking outfit in the early days of the disastrous second partnership. Alonso did himself no favours by ranting during the 2015 Japanese Grand Prix about the “Formula 2 engine” he was struggling with.

Fast forward and Honda might have had a secret giggle when the two-time F1 World Champion came calling for an Indycar power unit and they told him no-can-do. This the guy who slagged them off incessantly for three years before going on to spend two years with Toyota – talk about from insult to injury!

While Brown and his team have given his friend and their former driver a break, he made it clear to reporters that Alonso would not be involved with the F1 side of the team.

“We are in a different place now,” explained the McLaren boss. “That’s not a reflection on him, we have two great young drivers who are really fast that are working well together. The fans like them and we have a rhythm now and would not want to disturb that.”

Alonso’s two stints at Woking were forgettable and, in retrospect, bad calls that seriously impacted the team and compromised the career of the great driver from Oviedo on both occasions, albeit a decade apart.

The last stanza in fact ended his career in the top flight, at the end of 2018 he departed a team in tatters, in the wake of the Honda debacle. Thereafter, McLaren forfeited a works deal to become a Renault customer when a little more patience and solidarity with their partners might have reaped the far greater reward.

Alonso reflected on his famous faux pas, “It came from a place of frustration and maybe I should not say that, but I didn’t say it in the TV pen or the press conference. I was talking to my engineer in a private conversation. It was not meant to be public. But the engine was very bad.”

“The first year in Jerez [during testing], in four days we did seven laps. Now Honda wins a race and I receive a lot of messages that read: ‘GP2 engine wins now, it should be a sad day for you,” he added with reference to the fact that Honda started winning with Red Bull last season.

At 38, time is running out for Alonso to return to F1, a shame not only for him but for fans of the sport denied one of the greatest talents of this era, at perhaps the height of his prowess, battling where he belongs.

But fate – coupled to bad decision making and a big mouth –  has him scratching for a Chevy ride at Indy when he should be pumping a Merc or Ferrari around Barcelona today.

I can finally share with you that we will be competing again at the Indy 500! Thanks to @ArrowMcLarenSP and @RuoffMortgage ! Let’s do it ✊️✊️#indy500 pic.twitter.com/Eb1syBysPD