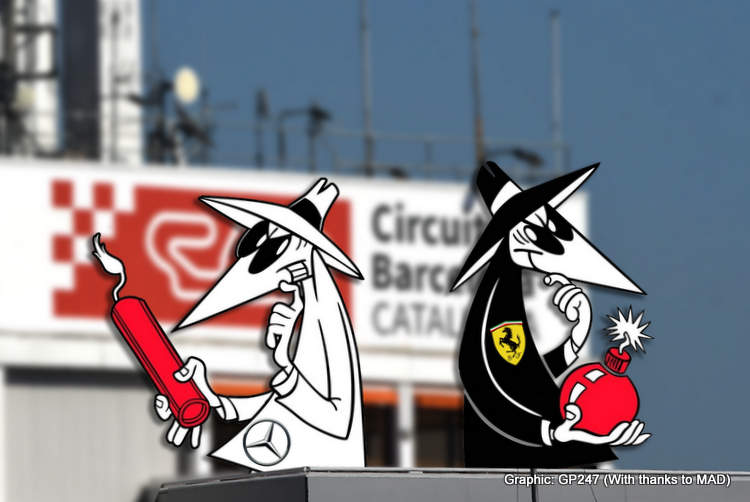 Hands up those of you who are still Mad magazine Spy vs. Spy fans? If so, you may be better equipped to deal with the imminent skulduggery as we head deeper into what promises to be the most Machiavellian Formula 1 test season of all time.

Whether it’s Mercedes’ ‘wass ist DAS’ wheel alignment trickery, Ferrari’s cloak and dagger lack of pace or Red Bull’s slippery as a fish approach to testing so far, you would need to be Nostradamus to predict what’s coming in Australia in a few weeks time.

Ten years ago — even five — it would already be plausible to place a safe bet as to what was to follow through the season and you’d still have your money come December.

Alas, that’s not quite the way it works anymore and it’s all down to deception, smoke, mirrors, Kiel fences, flow-vis paint and a handy dollop of good old F1 bullshit too.

Let’s start with the obvious. Ah! There you go — do you really think ‘wass ist DAS’ is all that it is made out to be? Of course, everyone is blaming Mercedes’ controversial Dual-Axis Steering for its allegedly mesmerising pace. But hang on a second — that pace in not quite mesmerising and is that device all that it’s made out to be? Not everyone believes that — I certainly do not — if anything DAS is nothing more than a cunning stunt to deflect attention from what really counts.

Never mind that ‘wass ist das’ is German for ‘what is that’. Cute, innit?

So what is it that really works on that Merc? Well, I can’t tell you. Yet. But what I can tell you, without doubt, is that Valttieri’s quickest lap Friday was three-tenths off his pole at Barca last year and most pundits are convinced that the current cars will be significantly quicker than they were last year. So who’s fooling who here? So I’m also prepared to bet that you ain’t seen nothing yet…

Before we move on, that Merc is a splendid thing, is it not? F1’s new live TV may and new rules preventing obscuring the cameras gives us a brilliant opportunity to take a far closer look at all latest F1 tricks from the luxury of our lounger throughout the test days. That also helped revealed quite a few über-cool new details on that W11.

Tighter packaged, it boasts a tapered nose that has even sprouted a carbon shroud ahead of the bulkhead to confuse what you are looking at, while aero enhanced suspension uprights force airflow through the slot between the brake drum shroud and rim to cool the wheel rim and thus lower the tyre temperatures.

Some say that the controversial DAS system further contributes to optimising tyre temperatures, but what actually works in that black art of rubber, aero and geometry remains unclear at this stage, Great effort has however gone into achieving weight-saving around the front axle and that certainly will cull unwanted unsprung mass

Whether it showed its cards or not in Spain, Mercedes appeared imperious in the first three days of testing as Bottas topped the week’s timesheets with a 1:15.732 Friday lap over Hamilton, who ended up a good eight-tenths off the pace.

But that’s still three-tenths off Valtierri’s Spanish GP pole at Barca last May, so who knows what’s still lurking in that silver arsenal. “We’ve made good improvement every day with the car,” Bottas admitted. “It’s been quite good — there are no real negatives, so it’s positive, but to say more is a bit too early.”

Before we move on to the next great 2020 F1 testing deception, it would be remiss not to consider a cause of clear copyright infringement. The ‘Pink Mercedes’ proved another keen Barcelona pitlane theme last week as customer team Racing Point rolled out a new car that was, well, not much less than a works Mercedes painted pink!

Literally everything about the new RP20, from its needle-nose to that rear wing and even its brake and suspension assembly seems a carbon copy of last year’s Merc. So far it seems to have worked with Lance Stroll and Sergio Perez an encouraging fifth and sixth overall last week.

Ferrari – all tuned down?

Moving into the red corner, Ferrari makes no bones that it was not chasing banzai laps last week as it learned about its new  SF1000, correlating track data with its sim stats back at base. A little scratching reveals that the Scuderia indeed turned its PUs down — both comparisons between Raikkonen’s Alfa Romeo speed trap pace and independent data hints that Ferrari was running at a second or more a lap off its real potential to further skew that Barcelona playing field.

The data does not lie — Ferrari’s 193mph best was over 7mph down on Raikkonen’s like-powered Alfa Romeo on Wednesday and 9mph off on Thursday. Then Vettel out of a the blue popped up at 204mph shortly before the Ferrari broke on Friday morning, so the concerned Tifosi may indeed have nothing to worry about after all.

That tenet is reiterated by Ferrari chief rival Mercedes scratching its head deep down in a piece of post-Friday test propaganda: “Why has Ferrari spent this test running its PU at much lower levels than their partner teams?” the champion team quizzed, continuing: “Nobody wants egg on their face claiming that they are faster, because they can never know for certain what was hidden or what is coming next,” the piece reads.

Sebastian Vettel meanwhile reiterated his team’s benign 2020 winter testing philosophy thus far: “You can play around with engine modes, but our target this week was to do as many laps as possible,” the four-time world champion pointed out. “Ramping up the engine is probably not something you want to do in testing and certainly just to show everyone our cards.” As such, Ferrari’s week 1 times were not even worth considering.

The new Ferrari SF1000 however revealed quite a few secrets to those freely prying cameras. The new car’s front wing has for example benefited much marvellous new detailing, while its bargeboard arrangement is intriguing — not least of all those boomerang panes.

Ferrari has also spent considerable effort on its front brake ducts to see them pushing far more airflow out through the front wheel rims, in an effort to deliver various aerodynamic advantages further back along the chassis.

Before we move on, we may as well take look at the new Alfa Romeo now. Perhaps surprisingly, the Sauber-run team ended up being the second quickest team overall as Kimi Raikkonen put in the third quickest lap over the three days when he topped Thursday’s charts and Tonio Giovanazzi went 8th.

Whether the Italo-Swiss team can continue its early aace relative to the rest remains to be seen, but the far sweeter C39 features a few neat novelties, including the return of an integrated halo winglet and a good few Ferrari like cues around the car.

It was not all that different to Ferrari a little further down the pitlane at Red Bull, where while its drivers never delivered anything near the pace that would warrant it, there was a visible spring in its drivers’ step. “I am very happy with the new car” Max Verstappen reported, “It is fast everywhere, which is a good thing, and the reliability seems even better, so that’s all very positive.”

A closer look at the Red Bull RB16 revealed that the car likely leads the 2020 aero trend toward far tighter-packed radiators and ancillaries in search of an even slimmer sidepod profile for optimal aerodynamics while still amply cooling that Honda power unit.

The only concern in this regard is how efficient cooling can be in the event of a super-hot race day — it would not be the first Red Bull to suffer the overheating side effects of Adrian Newey’s manic chase of absolute packaging.

Like Ferrari the Red Bull also delivers an enhanced outward draught through its brake and hub duct assembly, while other notable updates include a greedier-looking S-duct, a significantly raised rear suspension and an all-new exhaust layout.

All that said, Verstappen and Alex Albon were hardly pace setters in the first week, but pitlane tongue-wagging also suggested that Red Bull will likely bring a significant upgrade package to the second test week, so once again, watch this space!

For the rest, perhaps unsurprisingly the all-new AlphaTauri AT01was another car in the carbon copy (or is that incest) limelight for its similarities to kissing cousin Red Bull and there seems a lot more to the similarities than that both cars use the same power unit.

The AT01 shares much of the Red Bull’s curves, gradients and lines too and if week 1 is anything to go by, its pace is quite similar — Daniil Kvyat emerged quickest of the Honda cars in seventh. ahead of both Red Bulls, which Pierre Gasly also managed to split in the overall week timesheets.

There was also quite some interest in the new Renault RS20, which broke cover at last on Wednesday morning to reveal a few cool novelties including a narrow nose with a significant cape under its chin, a much more waisted profile and what appears to be a far more raked stance.

The Renaults showed good pace with the returning Esteban Ocon an encouraging fourth and Daniel Ricciardo tenth overall over the three days, but the test was not without trouble for the Enstone squad with a few niggles interfering with its week’s progress.

McLaren meanwhile quietly got on with its week’s work without any histrionics or drama as it too kept to its own program and devices. The team tried a new front wing on Friday among several tests and experiments and Carlos Sainz and Lando Norris’ overall pace was like certain other teams, not even worth considering.

For better or for worse?

One team looking much better was Williams, which not only exorcised last year’s ghosts by getting out first of all cars Wednesday morning, but the team showed encouraging pace through the three days of testing as George Russell escaped the team’s default bottom of the timesheet laggard status to wind up 14th quickest for the week and even rookie Nicholas Latifi was two places away from the bottom of the leaderboard.

Haas, however, endured a frustrating and crash-infested week, before packing up early with Romain Grosjean 17th and a compromised Kevin Magnussen slowest over the two and a half days.

One thing seems sure however — the tighter F1 midfield may not even have a tail this year, but upfront, it would be a fool who hazarded a guess at this stage.

In reality, none of the big three have shown their cards yet and two of them have not even tried to turn a quick lap. With a little luck that will change in this next week’s test — and what is a new F1 season without speculating as to how it will run? So let’s hope there are a few little signs we can hang our predictions off come this time next week. Bring it on!