Mercedes: Why are Ferrari running their PU turned down? 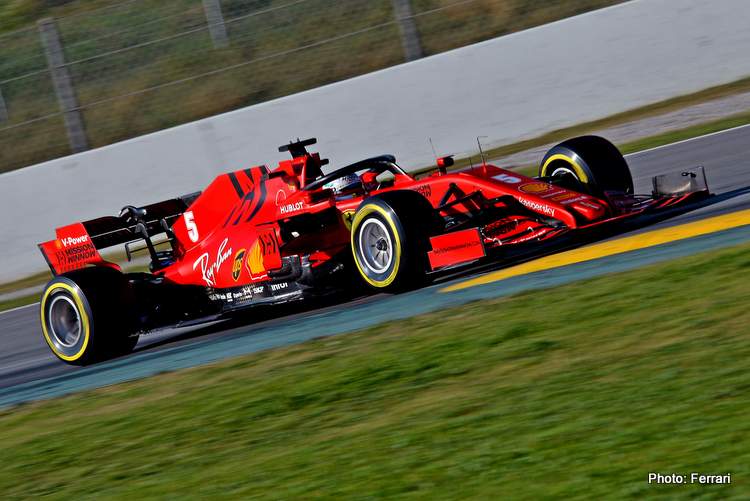 Reigning Formula 1 champions Mercedes suspect Ferrari are considerably faster than the Italian team let on in Formula 1’s first pre-season test in Spain, with the gap between the top three and the rest closing.

Teams have six days of testing before the season-opener in Australia on March 15 and the engineers have plenty of data to crunch at the halfway stage.

On paper, Mercedes were more than a second quicker than the next team at the Circuit de Barcelona-Catalunya and also covered the most distance.

Ferrari boss Mattia Binotto told reporters he was less optimistic than last year, when his team’s pace was evident to see, “The others are faster than us at the moment, I believe.”

Mercedes, who are chasing an unprecedented seventh successive title double this year with Lewis Hamilton also out to equal Michael Schumacher’s record seven crowns, were not about to crow.

“No-one wants the egg on their face of claiming that they are faster than another team, because they can never know for certain what was hidden or what is coming next,” the team observed in an assessment on their website.

“Will Red Bull bring a significant upgrade package to the second test? Why have Ferrari spent this test running their PU (power unit) consistently at much lower levels than their partner teams?

“What we can say is that we predict the battle in Melbourne at the front is going to be tight. We can also see that the midfield have closed on the front and that there is some considerable midfield swing compared to last year’s competitive order.”

Valtteri Bottas’s fastest lap on Friday was one minute 15.732 seconds, compared to Sebastian Vettel’s best for Ferrari of 1:18.154 on Thursday. The Reds were only eighth fastest of the 10 teams.

However, the quickest time by a Ferrari-powered car was Kimi Raikkonen’s 1:17.091 for Alfa Romeo, on the same C5 tire as Bottas, when the 2007 champion was top on day two.

Alfa were second fastest overall, just ahead of Renault and Mercedes-powered Racing Point.

Ferrari did not hide the fact that they were taking a different approach to last year when they sent expectations soaring with their testing times only to see Mercedes win the first eight races.

“This year we’ve decided to focus more on ourselves, trying to learn the car as much as possible in the first few days and focus on performance a bit later on and see if that pays off,” Charles Leclerc said on Wednesday.

Teams can run whatever fuel load they want in testing and also try out concepts and devices that would be illegal in race conditions.

If Ferrari were hiding their true pace, worried fans could take little comfort from the total number of laps covered, however.

According to figures published by tire supplier Pirelli, Mercedes did 494 laps over the first three days while Ferrari completed 354. That placed them eighth overall, ahead of only Williams (324) and Haas (316).

There is no doubt also that Mercedes, causing a stir with an innovative new dual-axis steering system (DAS), are flying.

Bottas’s time was half a second quicker than Hamilton’s best of 1:16.224 in the entire eight days of 2019 pre-season testing. It was also only three tenths slower than the Finn’s record lap in qualifying for last year’s Spanish Grand Prix.

“It’s been a good first week, the car has been broadly reliable, and the performance has been reasonably good throughout the week,” said technical director James Allison.

There were also smiles at Williams, looking more competitive after a dismal 2019 in which they scored only one point, and at Mercedes-powered Racing Point whose pink car looks just like Hamilton’s 2019 title-winner. 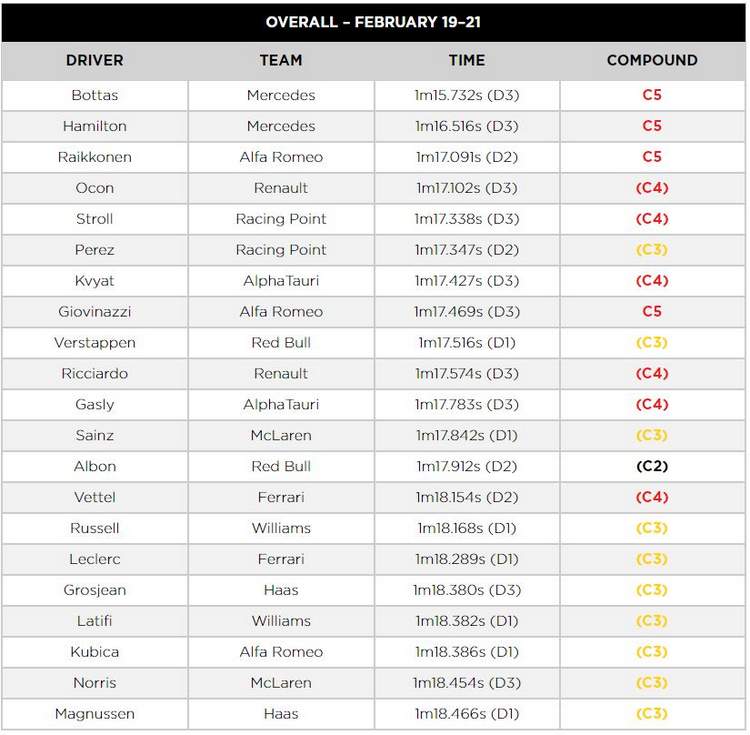