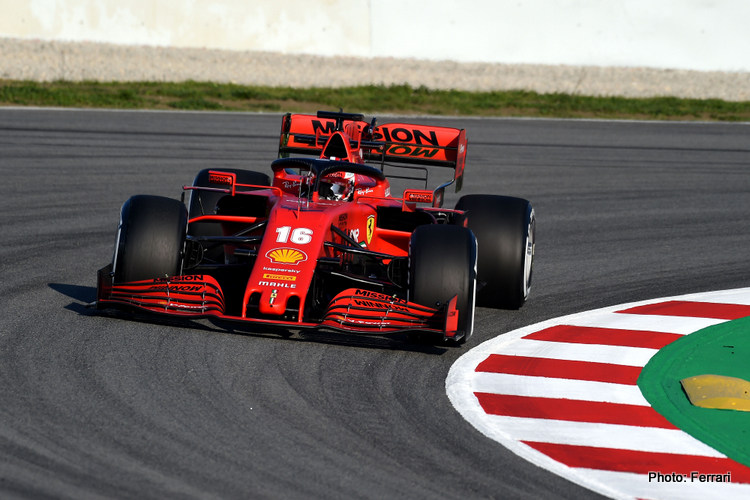 Swapping-out an unwell Sebastian Vettel for his teammate Charles Leclerc was not the only change Ferrari made on the first day of testing on Wednesday.

Another became apparent later, with the Monegasque only 11th fastest on the timesheets where last year Ferrari had made an immediate splash with Vettel setting hearts racing with the top time.

“Last year the testing was great but the first race was a bit less great.

“I think we’ve learned a few things on this, so this year we’ve decided to focus more on ourselves, trying to learn the car as much as possible in the first few days and focus on performance a bit later on and see if that pays off.”

Ferrari went to Melbourne for the Australian season-opener last year as the clear favourites after setting the pace in testing, only to suffer a cold shower as champions Mercedes triumphed one-two.

Mercedes went on to win the first eight races of the campaign, ending the year with a sixth successive title double and Lewis Hamilton a six-times champion on the cusp of setting more records.

Leclerc was one of the bright spots for Ferrari, the sport’s oldest and most successful team, and is seen as a challenger to Hamilton’s title if Ferrari can give him the tools.

He scored more points, poles, podiums and wins than his four-times champion team mate and in December secured a contract extension to the end of 2024 while Vettel’s future remains uncertain.

The 22-year-old won two races, compared to Vettel’s one, but it could have been more — he was let down particularly in Bahrain while leading from pole by engine problems that dropped him to third.

Now enjoying equal status within the team as he starts his second year at Maranello, Leclerc said he had been able to shape the direction of this year’s car to make it more to his liking.

“We have more flexibility in the car set-up this year, so this is always a good thing for both drivers because we can adapt the car to our driving,” he said.

“We didn’t push the car yet but we know we’ve more flexibility. This is a fact. This can only be positive.”