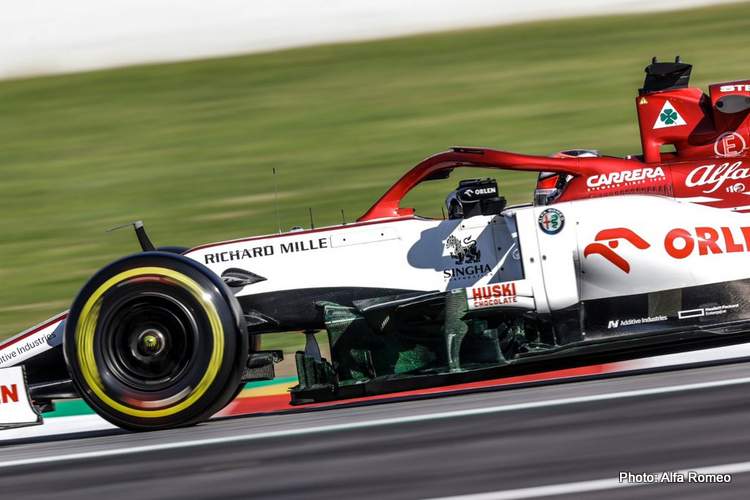 Kimi Raikkonen was ‘back at work’ doing testing duty in the Alfa Romeo C39, the veteran ending the day fastest of all but also was the first driver to stop on track and bring out the red flags on day two of Preseason Formula 1 testing at Circuit de Barcelona- Catalunya.

The Finn set a flurry late hot-laps late in the afternoon that saw him take top spot on the timing screens with a best lap of 1:17.091 shortly before his car came to a standstill, with 15 minutes remaining in the day’s track activities. He managed 134 laps on his first day in the new car.

Sergio Perez was again in fine form as he put the Racing Point top of the timesheets at the end of the morning, only to be knocked down to second late in the day. The Mexican was a quarter second of the top time with 145 laps on his chart.

Renault gave both their drivers stints in the car with Daniel Ricciardo covering 41 laps in the morning setting the third-best time in the process. Teammate Esteban Ocon completed 52 laps in the afternoon and ended the day 12th.

Next up were two Honda-powered drivers, with Alex Albon fourth fastest during his run of 134laps; he ended eight tenths off the top time and a couple of tenths ahead of Pierre Gasly in the AlphaTauri.

After sitting pout day one of the test with a bug of sorts, Sebastian Vettel was back on duty for Ferrari in the afternoon, after taking over the cockpit from Charles Leclerc. The German was sixth fastest, with his teammate eighth. They combined to complete 152 laps in the SF1000.

George Russell, clearly relishing his new Williams, split the Reds on the final timesheets, in seventh and 1.24 seconds shy of the top time.

It was an interesting day over at Mercedes as the World Champs got the paddock buzzing with their new steering device. Lewis Hamilton was busy in the morning stanza as he logged 106 laps on his way to setting the ninth-best time, while teammate Valtteri Bottas was 13th and slowest of all.

“Experimenting” and “powder-dry” are words that were bandied about at the end of the day regarding the performance of the Silver cars. The W11 completed 183 laps, easily more than their rivals.

Lando Norris did useful mileage during his day in the McLaren with 137 laps and the tenth best time, fractionally quicker than Romain Grosjean in the Haas in 11th. 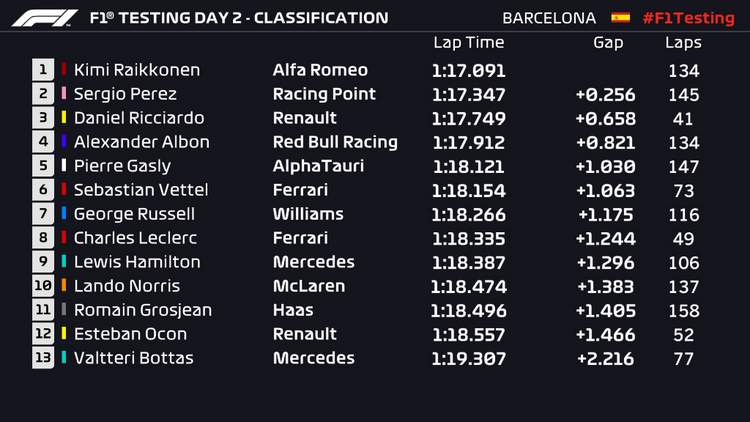