The Undercut: Vettel will be Leclerc’s number two in 2021 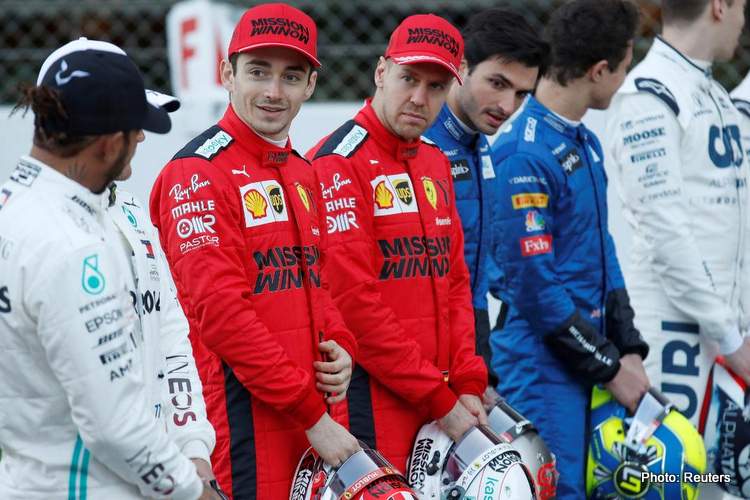 Not too long ago, I observed that based on recent form and temperament, Sebastian Vettel should probably go home to his lovely young family for good.

He’s inked himself into Formula 1 history, stashed almost every million he’s earned in a numbered bank account, set up the perfect wood and metal workshop on a farm alongside his vintage Triumph motorbikes, and set his lovely wife and little kids up for a long, happy life post-F1.

The same guy who couldn’t accept that simple ‘Multi-21’ team order some years ago, or stop waving his irritating diagonal pointer finger all over the place in parc ferme, is now facing a slow slide down the Ferrari and F1 flagpole. And the ‘Multi-21s’ he’ll be receiving this year? He’ll no longer have the authority to ignore them.

Do you remember when a furious and disheartened Mark Webber — once again on the sharp end of a Multi-21 — declared that Red Bull “got the result it wanted” by sacrificing him and favouring Seb? Back then, it really was true. But in 2020 and beyond, the result Ferrari wants will be in the form of a big shiny trophy held above Charles Leclerc’s head — and does Vettel need that? Does he want that?

Surely, it’s time to cut his losses, count his victories and his titles and his millions, and go out in style as someone who called it a day as soon as he realised only disappointment and humiliation and subordination would be his rewards at the end of a race weekend.

But I’ve changed my mind.

Right now, I don’t think Vettel is going anywhere. And I’d also like to join the muted voices of those who wish him well ahead of the most formidable challenge of his career — recapturing Ferrari’s heart and realigning his targets. In 2020, he has certainly made a good start.

Yes, Seb’s ‘mission Ferrari’ has been considerably wobbly over the past year or two, and I see a clear reason for that: At Red Bull, he was an unstoppable force. His wild ride of seemingly endless 45-degree victory index fingers hit a sudden and unexpected roadblock in 2014 in the form of a crappy Renault engine and a grinning and winning Daniel Ricciardo.

So Seb thought to himself: “What a perfect time to pick up where my hero Michael Schumacher left off and rattle off a few titles in red and retire as the equal most successful driver in F1 history!” What a fairytale story it would have been.

So to me, it is obvious (at least now) what happened: Vettel took a few years to realise that the sport he thought he understood perfectly is not quite so perfectly understood by anyone, him included. Starting from an easy pole, ignoring team orders with no consequence, and blasting off towards the chequered flag with a clear track ahead of you and an Adrian Newey-penned blown diffuser behind you may be quintessentially F1 – but it’s certainly not going to last forever. Nothing like that ever does.

And so, Seb finds himself in the situation he finds himself in: a long, long way away from those heady ‘youngest ever’-branded days, chastised every single week by a hysterical Italian media contingent desperate to hail a new saviour (Leclerc) and safeguard the Prancing Horse, and forced to consider slipping outside the top 3 teams. The alternative is to accept his fate as an ageing water-boy for the new Chosen One who is a full decade younger, has only 2 wins on the board, and an astonishing five-year deal in his pocket. So what does a champion like Vettel do in such a situation?

Now, Seb has been thumbing through ‘Italian for Dummies’ since he first walked through those Maranello gates, and we’ve all heard him say ‘Grazie Ragazzi’ ad-nauseum on the radio. But my understanding is that he’s only now getting really serious about it.

This pre-season, Vettel has really thrown himself in at the deep end. At the Ferrari launch, he launched into a fairly soft, easy and comfortable interview with team ambassador Marc Gene, and the punchline was basically that all pasta is good. Leclerc, of course, put Seb’s grasp of the beautiful language to shame by quipping that he is personally staying away from tortellini as he carefully watches his pre-season waistline. But Vettel went back into battle in the last few days by appearing on an Italian talkshow with both Leclerc and Mattia Binotto — and threw himself under the bus of the full Italiano linguistic challenge yet again.

As an admirer of human language myself, it’s important to emphasise just how important and powerful it is — and Vettel knows all too well that Leclerc has the ‘Italian advantage’ by speaking it pretty much perfectly. And if you speak Italian, you speak Ferrari.

That’s because thinking, planning and executing doesn’t happen in a vacuum — it pretty much all happens in our head first, in the form of one specific language at a time. I recall Jacques Villeneuve (a Quebecois) saying at one point during his career that he’ll prefer to speak to the media in French (because of its eloquence and intricacy), and to set up his car in English (because of its nuance and precision).

And if I’m going to stereotype here, I would imagine that Seb does his maths and spreadsheets in German, watches his Monty Python and listens to his Beatles and Rolling Stones in English, and angles for a bellisimo new Ferrari deal in … you guessed it.

If I was to do even more guessing, I would imagine that Vettel has accepted that he’s never going to be 22 again, never going to speak Italian as well as Carletto Leclercivinazzi, and probably never going to be number 1 again — anywhere. What he can do, though, is win back the hearts of the sport’s most passionate and emotional Scuderia and country, put his head firmly down, and hope to say ‘Grazie Regazzi’ as often as possible after the chequered flag waves — even if he can’t always be waving his irritating diagonal finger at the very same time.

For all this to happen, he’ll have to stop making dumb mistakes each weekend, happily join those who declare Leclerc an obvious star not only of the future but of today, and accept an eye-watering pay cut (even though he’ll still be earning precisely 8,000 times more than the rest of us). If not, we probably won’t be seeing Vettel in a yellow or an orange car next year. We probably won’t see him at all. And probably never again. Let’s see what happens.