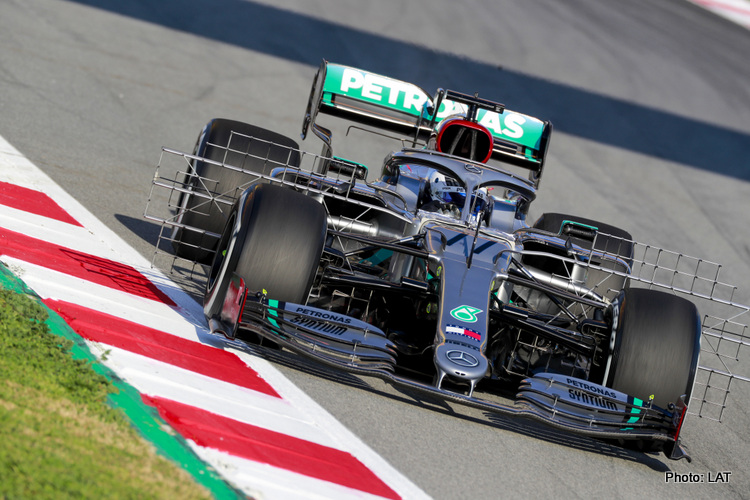 Valtteri Bottas managed to ensure Mercedes picked up right where they left off last season, topping the timesheets in the first session of 2020 Formula 1 testing at the Circuit de Barcelona-Catalunya.

Leading the way with a time of 1:17.313 on the C3 tyre, the Finn was 0.062 seconds faster than the Racing Point of Sergio Perez (also C3), and 0.474s faster than the third-placed Red Bull of Max Verstappen, who was fitted with the slower C2.

A session with no significant incidents, all teams were able to rack-up decent mileage, with Verstappen leading the way as the first to complete a race distance (66 laps), and going on to complete a total of 91 before the session came to a close. Bottas was second-best with 78 laps, Daniil Kvyat and AlphaTauri had the least with 54.

The stars of testing last year, Ferrari endured a somewhat rocky start to their 2020 campaign, first with scheduled driver Sebastian Vettel forced to withdraw due to illness, and then with replacement Charles Leclerc stuck in the garage for an extended period of time. Ultimately, the Monegasque finished seventh-fastest, 0.976s off the pace, with 64 laps under his belt.

Adding to what looked like a clear reversal of fortunes from this time last year, Bottas’ efforts represented a marked improvement for the Silver Arrows, who were eight tenths quicker than the best time on day 1 in 2019, and almost three seconds faster than their team-best time on that day.

The other big improvement of the session was Williams, who after missing the first two days of testing 12 months ago, were able to complete 73 laps courtesy of George Russell. Additionally, Russell’s best time was good enough for sixth on the timesheets, and nine tenths better than his qualifying lap at the 2019 Spanish Grand Prix.

Elsewhere, McLaren and its engine-supplier Renault were only split by 0.003s, with the former’s Carlos Sainz ahead of the latter’s Esteban Ocon in fourth and fifth, respectively. Robert Kubica’s sole appearance this week saw him eighth for Alfa Romeo, Haas’ Kevin Magnussen finished ninth — his times not helped by an excursion onto the gravel during the final hour — and the aforementioned Kvyat brought up the rear, 1.171s behind the leader. 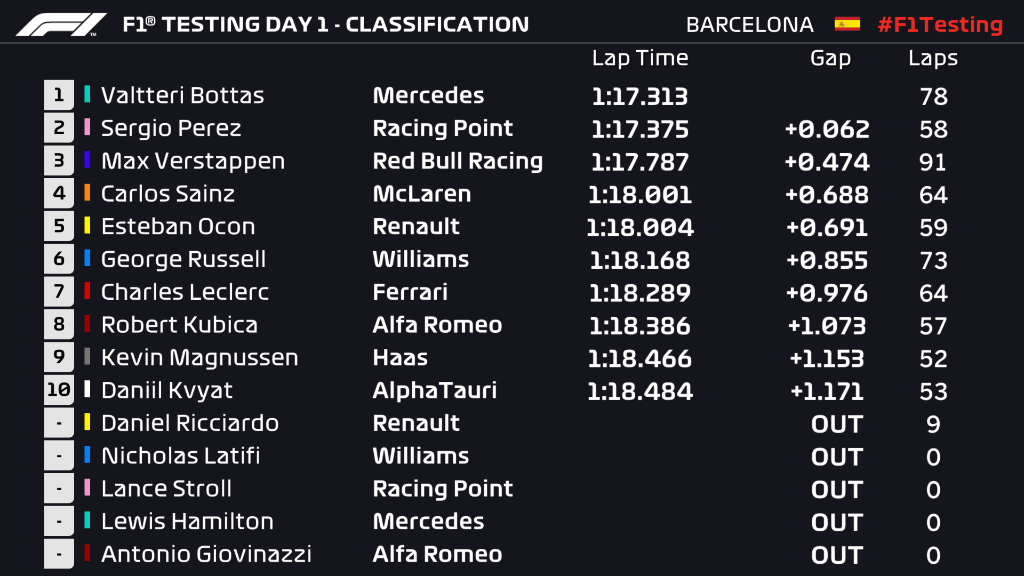