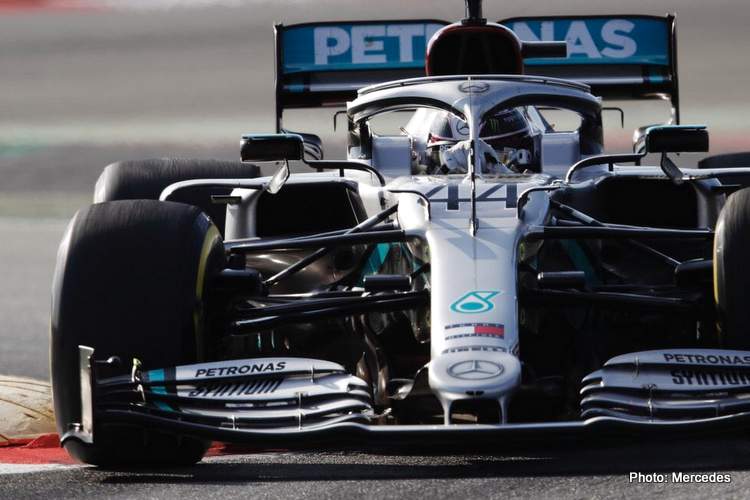 Lewis Hamilton and Valtteri Bottas topped the timing screens at the end of the first day of Formula 1 testing at Circuit de Catalunya Barcelona, as Mercedes fired the first warning to their rivals: they are on it from the word go!

Testing is largely meaningless as last year proved, but it does provide an indication of who is where at the end of the winter arms race, and it would be fair to say that the Mercedes W11 is a neat and rapid piece of kit which is hot out the box.

Hamilton, who earlier this week scooped the Laureus Sportsman of the Year Award, was in the car for the afternoon stint and ended the day on 1:16.976, which was three tenths up on his teammate Bottas on the morning shift. The World Champion did 94 laps in the afternoon and set his best time on the second hardest C2 Pirelli tyre.

The Finn topped the timing screens when he hopped out of the car at the lunch break, with 79 laps on his chart, and you would have to imagine the wick is nowhere fully turned up on the car at this point. Ominous from Mercedes. His best effort was set using the softer C3 rubber option on the very green track that greeted drivers when they were set loose.

In contrast, rivals Ferrari suffered an early blow to their plans when Sebastian Vettel reported in sick, did a photoshoot with fellow drivers on the start-finish straights before leaving the Spanish GFrand Prix venue to recover. Charles Leclerc was instead drafted in to start his duties sooner.

The Monegasque was 1.3 seconds off the pace in the Ferrari SF1000 as he racked up 131 laps during the course of his unexpected first day back at work as they say.

Closer to the Merc drivers was Sergio Perez, four-tenths shy of the top time, in the Racing Point with 79 laps to add to the 50 Lance Stroll added to the car during his stint. The Candian was a second slower than his teammate.

Remarkably the eight hours of track action did not feature a red flag stoppage, suggesting teams are really on top of the reliability in this final year of the turbo-hybrid formula as we know it.

Having said that, Max Verstappen tried hard to caus one but didn’t as he clearly relished his time in the Red Bull RB16, racking up a massive 168 laps, more than any of his colleagues on the day. A spin or two testament to a day tickling the edge with Adrian Newey’s latest creation.

McLaren’s Carlos Sainz completed an impressive 161 laps and was quickest of the three Renault powered drivers who were in action on today. The Spaniard was sixth fastest, 0.866 of a second shy of the top time.

A mere three-hundredths of a second adrift of Sainz was Daniel Ricciardo in the all-black Renault with 54 laps completed during his afternoon stanza in the team’s new car which broke cover in the pitlane before engines fired up for the business of the day. The Aussie was one of three drivers to set their best time on the harder C2 compound – Hamilton and Stroll the other two.

After a year on the sidelines, Esteban Ocon was back in the top flight and was given the honour of taking the RS20 out for the first stint in which he completed 62 laps and ended eighth. A couple of tenths separated the Renault-powered trio.

Big kudos to Williams for getting their car out on time in the wake of the memories from last year’s debacle. They sent a message by getting their lad George Russell out for the first run.

By the end of the day, their drivers combined to complete136 laps with Russell ninth fastest, 1.1 seconds shy of the top time – they were never that close all of last year! New boy Latifi was soon comfortable and went on to complete 63 laps an ended the day 12th.

The four Ferrari-powered drivers testing on the day hogged the bottom five positions on the final timesheets with Leclerc a tenth up on Alfa Romeo’s new test driver Robert Kubica who broke ion the team’s new car which broke cover earlier in the day before proceedings began. The Pole was 13th, ironically, slower than both the Williams drivers.

Antonio Giovinazzi took over the Alfa Romeo C39 in the afternoon. He completed 78 laps but was 3.1 seconds down on the top time; slowest of all on the day. Splitting the two Alfas on the timesheets was Kevin Magnussen in the Haas VF20.

It was a solid day for teams and drivers with the aforementioned impressive reliability resulting in more laps on the opening day of testing in recent memory. 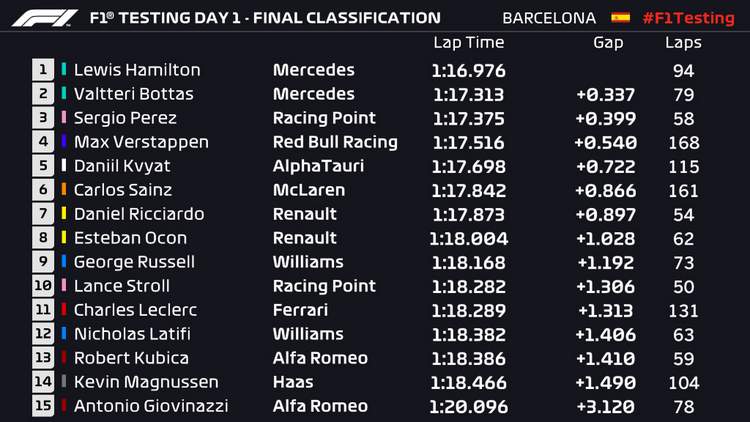 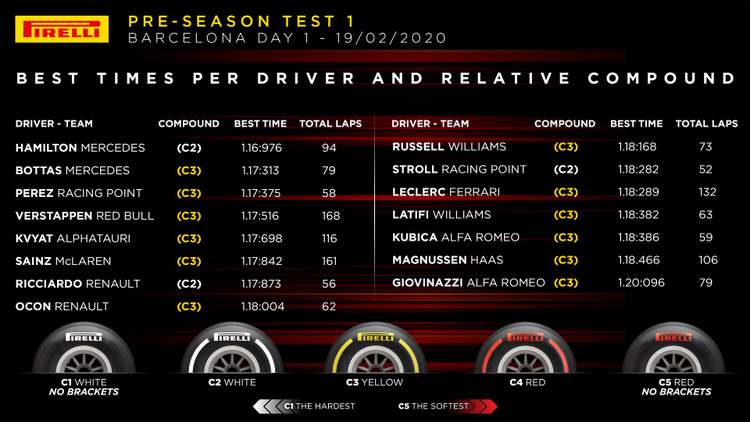