Ocon: The atmosphere is better with Daniel than Checo 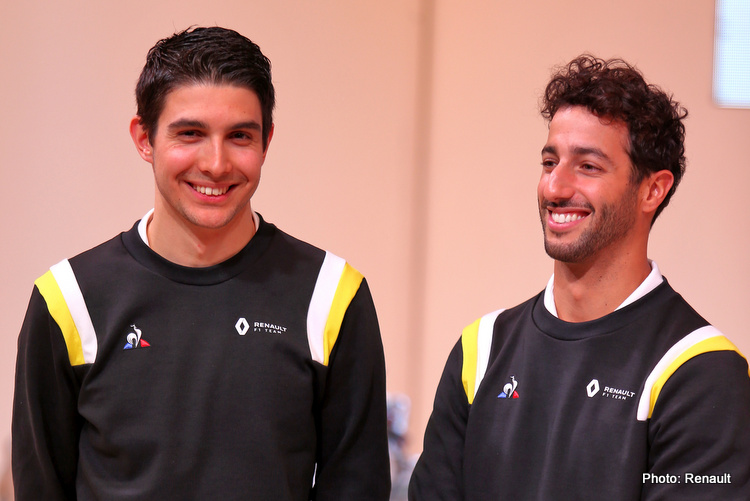 New Renault driver Esteban Ocon doesn’t foresee any friction with teammate Daniel Ricciardo in 2020, as he hopes to avoid a repeat of his tumultuous relationship with Sergio Perez at Force India.

Having previously spent two years in Formula 1 from 2017-18 where he made headlines by colliding with Perez on several occasions, Ocon indicated his new start this year is not just about changing team colours.“What happened at Force India is not something I want to redo again,” he admitted to formula1.com. “It was not a nice atmosphere. We had respect — me and Checo — and it didn’t slow down the team or anything but the atmosphere between us was not so good.

“On track we came close too many times, that was clear, and that was not good. It’s not something I want to do again. The atmosphere is definitely a lot better between me and Daniel than it was with Checo.

“So if we can keep working like that, even though it’s going to be different on track, it’s going to be a lot better for everyone to have a positive energy and a great working environment. Hopefully we’re going to be solid on that topic and be able to push the team forward. But no, we don’t want to have that happening. Of course it can always happen at the start or something, but in a race like it happened it was not acceptable.”

No stranger to teammate drama himself, Ricciardo had some notable clashes with Max Verstappen during his time at Red Bull, although ultimately the two parted on good terms. With Ocon, the Aussie hopes keeping things easy and open will help to avoid any serious conflict.

“I’m definitely coming into it with a fresh approach and I don’t want to lay any rules down from day one, because I think already that will create a tension in itself,” he revealed.

“But the way I saw it was: ‘Mark and Vettel have their own relationship. That’s not my relationship so I need to establish something with him. It’s a bit like Perez and Ocon and me and Ocon. Maybe he had his things in the past, even with Max [Verstappen, when they collided in Brazil], but I need to create something for myself with him. So I’m not going to come in with any kind of ideas or hesitations.

“I’m prepared for competition, but I’m not prepared for fun and games. If down the track fun and games appear then I’ll deal with it at the time but I think I’m certainly coming in with an open mind and positivity, as opposed to, ‘oh ****, when’s he going to blow up?’ I’m not thinking like that.”

For Ricciardo, the real concern is returning Renault to prominence, and not any sort of intra-team jostling.

“I have every intention of building something positive. On Sundays we’re going to race it out and maybe we’ll bang wheels at some point, but it’s I think our best intention to try to get this team in a good place before they start losing energy focused on managing us you know they need to manage a better race car.”