Szafnauer: We Want to Be One of the Top Teams in the Sport 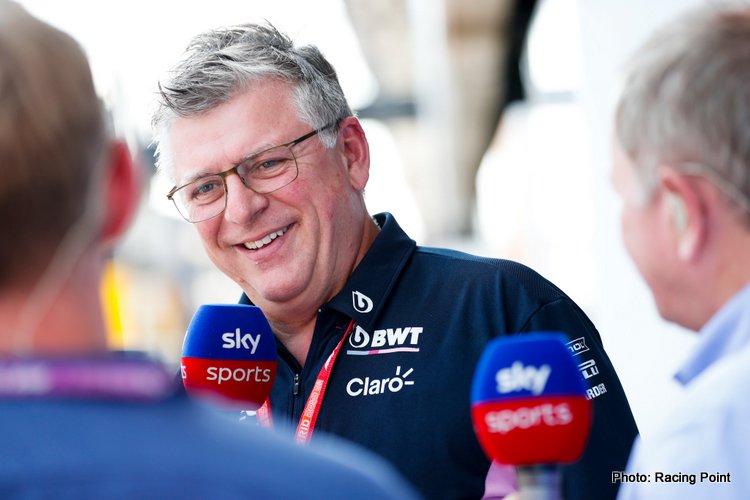 Racing Point team principal Otmar Szafnauer has revealed his excitement for the impending partnership with Aston Martin, with it set to provide a ‘real injection of energy’ to the Silverstone-based outfit.

Speaking in an interview released by Racing Point PR, the 55-year-old hailed team owner Lawrence Stroll’s purchase of a stake in the legendary British marque as the start of something great for the future of both organizations.

“As one of the most iconic sports car brands in the world, Aston Martin needed a presence on the F1 grid and this solution delivers a fully-fledged works Aston Martin F1 Team from 2021 onwards. It’s news that will excite fans around the world and will shine a spotlight on a brand that is widely regarded as Britain’s finest luxury sports car manufacturer,” he said.

A perennial midfield team since its inception as Force India 12 years ago, Szafnauer believes the move to a works F1 team could finally see them transform into an F1 front-runner, while also helping a brand in Aston Martin that has struggled in recent years to maintain profitability.

“Creating a works F1 team achieves a number of objectives for Aston Martin,” he explained. “It delivers a high-profile marketing platform for the road car division, which will enhance commercial appeal in all areas of the business. There is also the obvious technical collaboration between the F1 programme and the road cars, with F1 technology filtering through to the products Aston Martin launches in the years ahead. This is particularly relevant to the mid-engine philosophy that is just around the corner. The competitive environment of racing is a rich avenue for innovation and the opportunity for technology cross-over is incredibly exciting.”

“[Additionally] it certainly provides a real injection of energy for the 465 loyal and hard-working staff in Silverstone. The team has been in business, under various names, for 30 years and is more than ready to become a manufacturer team. Lawrence [Stroll] spoke to the staff last week and set out the clear objective to establish Aston Martin as one of the top teams in the sport. Everyone is proud to represent a legendary car manufacturer returning to the pinnacle of motorsport.”

That said, with one more year to go as Racing Point before the rebranding,  Szafnauer is cognizant that he still has a full season ahead of him in 2020 that his team cannot afford to lose sight of.

“There’s no immediate impact on our current campaign and we will continue to compete as Racing Point until the rebrand takes place at the start of the 2021 season. From then we will be known simply as ‘Aston Martin F1 Team’ – so the Racing Point name will disappear. It’s exciting to transition into a manufacturer team and we’ve got the best part of a year to make all those changes – much of which will be happening behind-the-scenes. It’s important we don’t take our eyes off the main task for 2020, which is to be competitive on the racetrack with the RP20.”