Bathurst 12-Hours: The Bentley Boys and their brilliant day 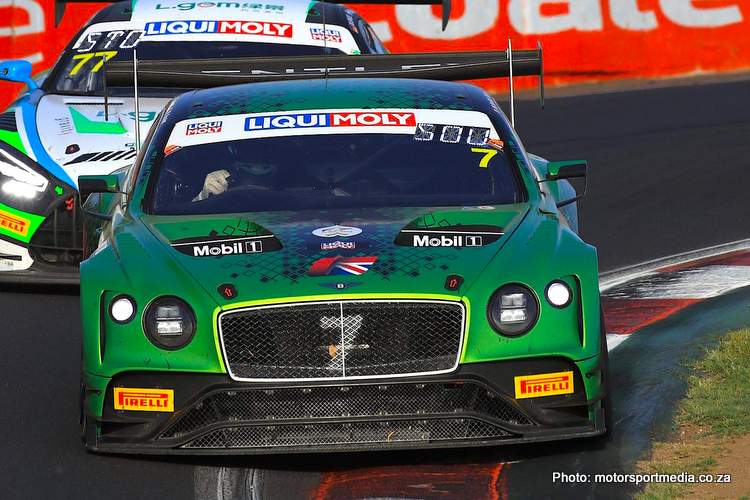 The trio overcame a troubled Friday to qualify tenth and the number 7 Bentley was soon fighting for the lead, before taking a dramatic victory precisely as the heavens opened on the Mount Panorama circuit.

“I have no words, honestly, the rain held off, that was ours to win!” a dancing Jordan Pepper said immediately after the race. “The boys put in an amazing effort all weekend — it was so difficult for them on Friday and Saturday, so it was great to gift them a win — what a brilliant day!”

Pepper took the opening stint and was soon making places off the pre-dawn and up into the top three, where the Bentley would basically remain throughout before the Bentley trio commenced an intriguing race-long four-car battle with a pair of AMG Mercedes Shane driven by van Gisbergen and Maxi Goetz, and Raffele Marciello, Maximilian Buhk and Felipe Fragaof and Tom Blomqvist, Alvaro Parente and Ben Barnicoat’s McLaren.

The race was interrupted by three major crashes that saw the yellow flag flying as the hungry Mount Panorama circuit devoured three more cars in the early hours over and above the three destroyed in practice, but the number seven Bentley moved ahead after four hours and led the way through the six and nine-hour marks too, albeit swapping the top spot with the Mercedes and McLaren along the way as the varying strategies panned out.

The final three hours would however prove quite dramatic as Gounon tussled with the AMG Mercedes driven by Italian Marciello and local Aussie ace van Ginsbergen, before a perhaps fortuitous puncture dropped the Bentley behind the lead melee and out of sequence with just over an hour and one final pitstop to go under threatening skies.

Once that final round of stops played out, it was Gounon in a clear lead over Marciello and van Ginsbergen, but both Mercedes then suffered punctures to allow Blomqvist’s McLaren up to second ahead of van Ginsbergens Mercedes after second man home Marciello suffered a 30-second pit lane penalty, while SA driver Kelvin van der Linde’s troubled 18th-placed Audi set the fastest lap.

Gounon duly took the flag almost immediately as heavy rain started to fall. It was a case of sweet revenge for the Bentley, which had led the 2019 race only to be slowed by a late puncture to rob it of a certain victory, but the 2020 win also came with a record race time.

The Aussie race is, of course, the first of five rounds of the Intercontinental GT Challenge set to conclude at Kyalami in November and with SA lad Pepper, Gounon and Soulet in an early championship lead, all augurs very well for the November Johannesburg finale…