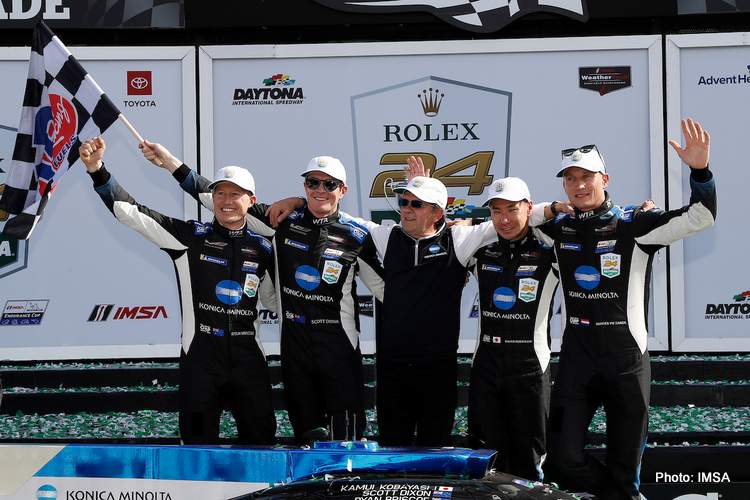 It was the first victory for the team owner without a Taylor behind the wheel and he grabbed his head in celebration, slammed the pit stand, then hugged his all-star driver lineup.

This Wayne Taylor Racing team came without either of the Taylor sons. Jordan, the youngest, left the team this year to become a factory driver for Corvette Racing while Ricky is in his third season driving an Acura for Team Penske.

Taylor had accomplished his dream by placing both of his boys in high-profile, properly funded rides. But that life goal forced him to rebuild his sports car program without either son.

“I feel really happy because most people have been saying this team only exists because of my kids,” Wayne Taylor said. “When we started it, we always felt we’d have them drive for us at some point and try to teach them. When they got offered these other drives with Penske and Chevrolet, I was the happiest guy out there, finally they can go away.

“Everyone was saying `Will the team close down?´ Well, why should we close down? We’ve got a great group of people who work with us. We need to take care of them. I used to be able to say we won because of my kids, well, now that’s not true because we won without them. So the team is really awesome.”

For the first outing, he assembled a lineup full of Rolex winners. Taylor called in five-time IndyCar champion Scott Dixon and Kamui Kobayashi, one of the top sports car racers in the world. They joined Ryan Briscoe and Renger van der Zande, the full-time drivers of the No. 10 Cadillac DPi.

“This team, the drivers, when they come into this little team of ours, they are so focused and so passionate about winning and fortunately we are really bad losers,” Taylor said.

The driver credentials in the Cadillac gave Taylor a “star car” of sorts, but his team was overshadowed in the buildup by other teams, the Rolex debut of reigning NASCAR champion Kyle Busch, and the bittersweet final breakup of the family-oriented team.

His team was so good in the twice-round-the-clock race that it shrugged off every tiny miscue – even when Briscoe blew through a red light on pit lane to earn a penalty that dropped him from the lead to a lap down – in a total beat-down of the prototype class.

“The Cadillac was just flat out from the start,” Dixon said. “We had lots of problems along the way, but I think that’s what made it so good. To come back and go a lap down and get the lap back – just had the raw speed. You can’t go wrong with the reliability and the performance and how we ran. It was unbelievable.”

Kobayashi, once a Formula 1 driver and member of Taylor’s winning team last year, was spectacular and the Japanese driver closed the final three hours to beat No. 77 Mazda Team Joest by more than a minute. The Cadillac was the only car on the lead lap for long stretches of the race.

Jordan Taylor, who finished fourth in the GT Le Mans class, couldn’t even remember the last time a Wayne Taylor Racing car won a race without a Taylor in the cockpit. He first guessed 2004, then amended his answer to 2008.

“I think since 2013 we went only one year without finishing on the podium,” said Jordan Taylor, referring to his former team as if he still drives for them. “It’s an incredible team, an incredible victory, a lot of good guys on the team who are like family.”

Ricky Taylor stoically watched from the Penske pits and said afterwards, “I couldn’t show too much excitement in our pits, But very happy for my dad and the whole team. They really deserved it, they were dominant.”

The race had a record 833 laps, breaking the mark of 808 set two seasons ago. Taylor now has two wins as a driver – one when he drove for Wayne Taylor Racing – and four as a team owner.