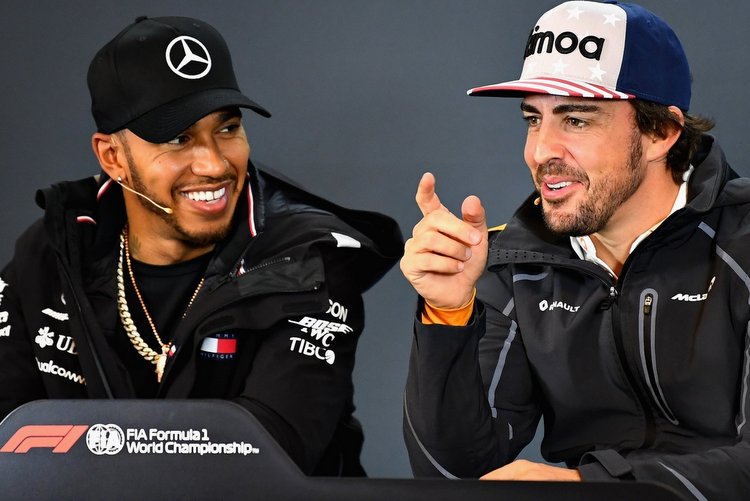 Lewis Hamilton would not be given the leeway to enjoy his current extravagant lifestyle if he raced in a “normal car”, according to Fernando Alonso.

Speaking to La Gazzetta dello Sport, Alonso made the comment whilst comparing the Briton to Michael Schumacher, having backed him to match the latter’s record seven titles in 2020.

“Hamilton can win his seventh,” he said, before comparing the way the 35-year-old Mercedes driver and Schumacher were able to achieve their respective feats.

“Each have their own character,” Alonso told the Italian paper during the Dakar rally. “Both of them dominated because of their cars, which allowed them to do what they wanted outside of Formula 1.

“Michael had more discipline and preparation. He was more into the team dynamics. Lewis has a different character and lifestyle that would not be right if he had a normal car. His bosses would not be happy,” Alonso, 38, added.

As for his own career, Alonso is now openly considering returning to Formula 1 in 2021. He revealed that he already had some talks about potentially returning this year.

“There were two or three situations with a few talks involving certain teams,” the Spaniard revealed. “We had contacts, but it was not the right time.

“What I miss about Formula 1 is the precision work with the engineers and the optimisation around the races,” he said, “but not the travelling, the consecutive races and only one team dominating.”

Alonso, who rolled his Toyota down a sand dune during Wednesday’s Dakar stage, said he will allocate more time to thinking about 2021 after May’s Indianapolis 500.

“This year I do not want to schedule anything after Indianapolis, but to think properly for 2021. I’m not too old to return but I want to reflect on whether I want to return to Formula 1 for some more years.”

As for his current challenges, Alonso said: “The Dakar is a personal challenge. I want to be fast in a raid car.

“It’s an adventure, but winning the 500 miles is a more competitive challenge. Winning there is my only goal. I’m close to being with the Andretti team.”