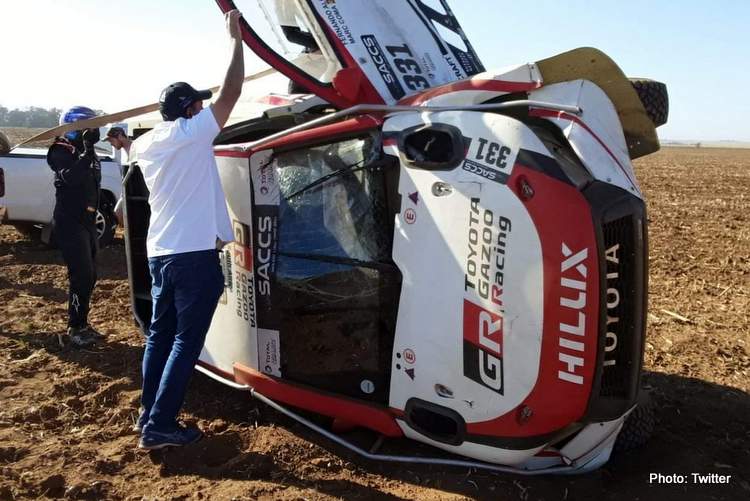 Dakar 2020 has started to deliver its much-feared sting in the tail following a shortened stage 10 on Thursday that still delivered drama and then some on the road to Shubaytah.

While the competitive stage was shortened to 223 of its intended 540km after gale-force Arabian Desert Shamal winds blew up sand storms to cut visibility, stretch official and airborne support, there day certainly served to shake up the car race as second and third-placed Nasser Al Attiyah and Stephane Peterhansel got lost to emerge 16 seconds apart but 18 minutes adrift of overall leader and day winner Carols Sainz.

Carlos Sainz senior wasted no time at all as the Spanish former double world rally and Dakar champion shot out of the blocks to defend his slender advantage over Qatari Al Attiyah’s proudly South African Gazoo Toyota Hilux, which had shaved Sainz’ overall lead down to a few seconds on Tuesday up to two minutes 174km into the day’s stage.

But that Shamal was building up to make the dunes dangerous to race as Fernando Alonso rolled his SA Hilux and among a litany of incidents caused by drivers misjudging the dunes in the trying conditions.

Navigation also proved crucial in that tough section as Al Attiyah lost his way to slip over 15 minutes behind, but he was not alone as Mr Dakar, Peterhansel and his Mini buggy lost 10 minutes along the same route to let Attiyah off the hook as he missed relieving the Qatari of second by all of 16 seconds.

So Sainz leads Al Attiyah and Peterhansel by 18 minutes overall, Al Rajhi, Argentine Orlando Terranova (Mini) and de Villiers an hour back and Ten Brinke and Serradori next up, with Alonso 14th.

US drivers continued to rule the side by side roost as Mitch Guthrie held off Blade Hildebrand for the day’s win as compatriot Casey Currie continues to lead overall with Zimbabwe’s Conrad Rautenbach lying fourth.

There was a surprise in the quads as Pole Kamil Wiesniwski beat Czech Zdenek Tuma to an upset win, but Chilean overall leader Ignacio Casale keeps his overall advantage over France’s Stefan Vitse and it was all about Russia and Kamaz in the trucks as Anton Shibalov beat Dimitry Sotnikov and Eduard Nikolaev took a 1-2-3 and Andrey Karginov consolidated his overall advantage too.

Thursday’s penultimate 365km dash back to Hradah is the second half of the car marathon stage after the no service bivouac at Shubaytah before Friday’s final 374km trek to Qiddia.

This daily Dakar report is brought to you by Motorsport Media courtesy of TreasuryOne Motorsport and Red-Lined Motoring Adventures.