Red Mist: Is Alonso the greatest all-round race driver ever? 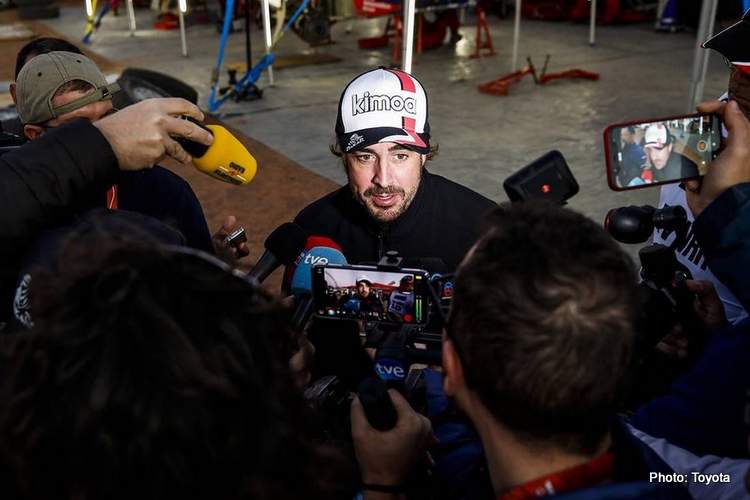 Is the double Formula 1 world champion en route to an incredible motorsport Quadruple Crown and with it the greatest all-round race driver ever?

Fernando Alonso’s Dakar drive on Monday 13  may not have brought the Spanish double World Formula 1 champion and twin Le Mans 24 hour winner his first stage win, but his rise through the field in the latter half of the 455km loop around the Arabian Desert oasis of Wadi Al Dawasir certainly set him out as a future Dakar winner.

Now Alonso has neither confirmed nor denied his intention to come back to Dakar, but if the day’s performance in his Toyota Hilux was anything to go by, the former assumption may very well be the case.

Dakar rookie Fernando was languishing in seventh at 108km this morning before a mid-stage surge up to fourth 100km later, only to lose that momentum in the next sector. But from there, he was literally on fire and the only man to match overall stage leader Mattieu Serradori, shadowing the Frenchman’s Corvette-powered Century buggy home to claim a very solid second for the day and cement a generally brilliant debut in the epic race.

His performance already has people baying for an Alonso-Dakar win, which should he achieve, could well single him out as the most successful driver of all time, were he to also add success in another of his pet projects to his rapidly growing curriculum vitae.

He said after a memorable day in the desert, “I don’t know who has come in behind. Obviously, for the guys in front, we beat them. Today we had an amazing day.

“We had one puncture unfortunately and we lost a little bit of momentum there, but otherwise, the stage was nearly perfect and Marc was unbelievable, you know – the dunes, the navigation…

“Even in the last part, we saw that the guys in front of us were a bit lost… For whatever reason I feel more comfortable in the dunes,” he added

Alonso will follow his eye-opening Dakar debut — perhaps even with a stage win in the remaining four days — with his third crack at the Indianapolis 500.

Now while Fernando’s second brickyard attempt fell embarrassingly short when he failed to qualify last year, his rookie attempt in ’18 went swimmingly — he raced up front and proved himself as a definite contender for a 500 win, which were he to achieve, would equal the late, great Graham Hill in achieving motor racing’s fabled Triple Crown of motorsport, which means winning all three of the Indianapolis 500, 24 Hours of Le Mans and the Monaco Grand Prix,

Fernando has achieved two of the three legs of the Triple Crown twice already — Monaco in 2006 and 2007 and Le Mans over the last two years. Alonso of course also matches Damon’s dad in winning a couple of F1 world championships in 2005 and 2006, while Hill took the 1962 and ’68 titles.

Juan Pablo Montoya is the only other currently active driver capable of doing the Triple Crown with two Indy 500 wins in 2000 and 2015 and the Monaco GP in 2003, so a Le Mans win would still see him in the game, albeit unlikely with an F1 world title to boot.

The rest of list of two-thirds Triple Crown contenders is also most impressive — Tazio Nuvolari, Maurice Trintignant, Mike Hawthorn, Phil Hill, AJ Foyt, Bruce McLaren, Jim Clark, Jochen Rindt, Mario Andretti, Emerson Fittipaldi and Jacques Villeneuve is pretty much a who’s who of motorsport greats that the contemporary Twin Crown pair would certainly be delighted to outdo, but first, Montoya must win at Le Mans and Alonso at Indy.

Alonso however now appears to be on track to achieve something nobody has ever done — to add Dakar to a plausible Triple Crown including Indy in a Monaco-Le Mans-Indy-Dakar Quadruple Crown to clearly set himself apart from the rest.

It’s still a long shot, but judging by both Fernando’s rookie performance at Indianapolis and so far in the Dakar, such an achievement is by no means unachievable.

Were he ever to pull that off, Alonso would, without doubt, be able to lay claim to the being the greatest driver of all time in what would be a truly remarkable achievement.