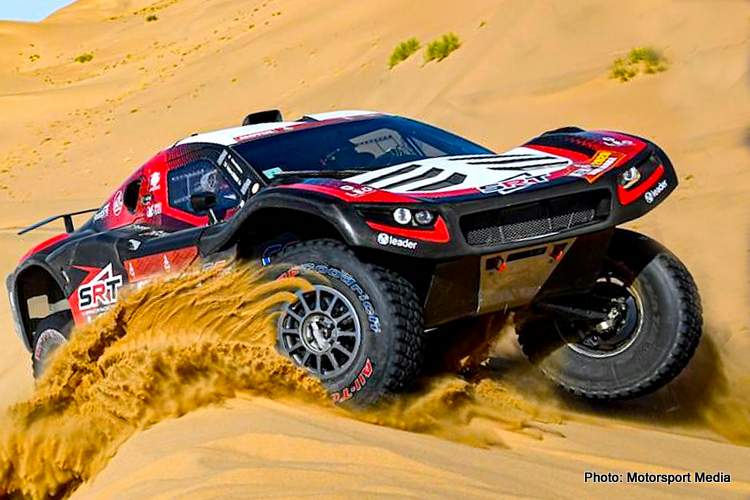 Standalone South African race car maker Century scored an upset at Dakar 2020 Saudi Arabia when Frenchman Mattieu Serradori stormed to a convincing maiden stage win for the team over double world Formula 1 champion Fernando Alonso and the might of Toyota.

Serradori owned the day by a tad over four minutes from Alonso, quickest of the Gazoo Toyota South Africa Hiluxes, Argentine Orlando Terranova in an all-wheel-drive Mini and SA star Giniel de Villiers in another Gazoo SA Hilux as the overall leaders struggled to find the road without motorcycle tracks to follow on a day that saw the bike and quad races cancelled in memory of Dakar legend Paulo Goncalves, who tragically passed away after a fall on Sunday.

Alonso is now 13th overall, albeit 3.10 hours adrift of top spot due to problems he suffered on day two. Nevertheless, it was an eye-opening performance by the dirt rookie in his quest to be the best driver who ever lived.

Overall leader Carlos Sainz driving a buggy-based rear-wheel-drive Mini lost significant time early on, although he clawed back some of the deficit to now lead Nasser Al Attiyah’s Gazoo SA Hilux and Stephane Peterhansel in another Mini buggy by the significantly reduced margins of 6 minutes 40 seconds and 13 minutes 9 seconds in the general standings.

Serradori soon overcame his low 14th starting position after losing time stuck in the sand on Sunday to move ahead of local hero Yazeed Al Rajhi (Hilux) midway through the day’s race, while Sainz, Al Attiyah and Peterhansel languished in 27th, 16th and 8th respectively.

Dakar rookie Alonso however put in a significant trot to leapfrog the lot and come home second behind the ecstatic Serradori, with Terranova third from de Villiers, Al Rajhi, Pole Jakub Przygonski (Mini AWD), Ten Brinke and countryman Eric van Loon in another Hilux and Peterhansel.

Spain’s Nani Roma (Borgward) closed off the provisional top ten ahead of Al Attiyah with Sainz likely to end up around 20th for the day, while Sedian lost time stuck in the sand to plummet down the order.

Chilean Fernando Lopez Contardo was meanwhile leading the side by side class, where Zimbabwe’s Conrad Rautenbach sat 8th after Mike Horn navigating for Cyril Despres withdrew on Sunday and Andrey Karginov, Dimitri Sotnikov and Anton Shibalov were in a Kamaz-1-2-3 in the trucks.

Dakar moves 410km on toward Haradh on Tuesday. This daily Dakar Report is brought to you by Motorsport Media courtesy of TreasuryOne Motorsport and Red-Lined Motoring Adventures.