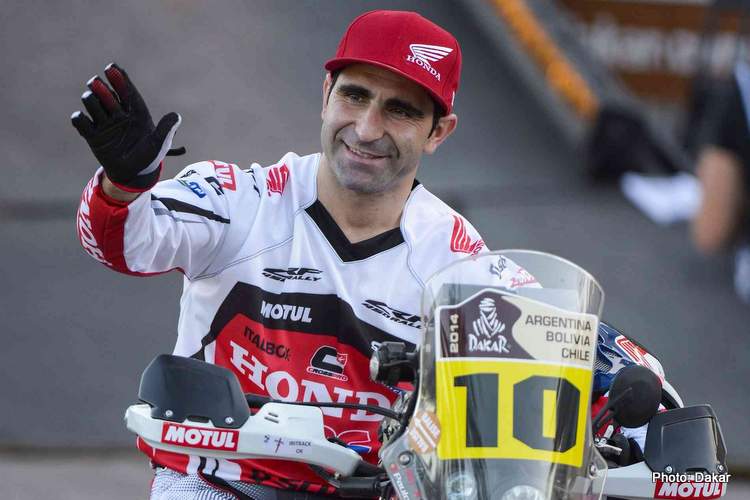 The 2020 Dakar Rally Saudi Arabia has been rocked by the tragic news that Portuguese rider Paulo Gonçalves (pictured above) succumbed to injuries sustained in a fall sustained 276 kilometres into today’s special stage.

The Dakar officials reported: “The organisers received an alert at 10:08 (0708 GMT) and dispatched a medical helicopter that reached the biker at 10:16 and found him unconscious after going into cardiac arrest.

“Following resuscitation efforts in situ, the competitor was taken by helicopter to Layla Hospital, where he was sadly pronounced dead,” it added.

We all do 🙏#Dakar2020 pic.twitter.com/ylltNYZWHK

The day’s however changed once several riders who stopped to assist the fallen Gonçalves will regain their time lost there, with third man overall on Friday and defending champion Toby Price re-classified seventh and Stefan Svitko 14th after running over an hour late. The revised overall results see Brabec leading Quintanilla, Flormino now ahead of Price, Barreda, Walkner and Benavides, while Branch was ranked 26th. Taye Perry meanwhile moved up to a stunning 57th, Landman 62nd, Gregory 70th and Sharp 80th.

In the car race, Spain’s double world rally and Dakar champion Carlos Sainz continued to stamp authority on the Saudi Arabian race with his third stage victory out of seven aboard his Mini buggy, to consolidate his overall lead.

Sainz told reporters afterwards, “It was quite a fast. We spent a lot of time going flat out, crossing some dunes. I caught Stéphane, but it was very dusty and I couldn’t get close, so I decided to stay behind.”

Sixth-placed Alonso, with veteran Dakar legend Marc Coma in the co-driver seat, was 7.49 minutes down on his fellow countryman Sainz at the end of the day. He is now 15th overall, 3.26 hours down on top spot.

At one point the Spaniard felt good for a first stage win of his off-road career, “It was a great stage for us but a puncture at the end meant that after two seconds the when the wheel disintegrated. which made us lose three or four minutes in the end.

“Without that, we would have been close to the top three which is a good sign but satisfied with the progress, being among the best over 540 km, ogives me hope for the last five stages. Tomorrow I can give it a squeeze more.”

The Side by Side vehicles saw US lads Blade Hillebrand and Casey Currie take the top two places on the day, while SA navigator guided French multiple bike winner Cyril Despres home fourth and Zimbabwean Conrad Rautenbach ended 11th to see Currie extend his overall lead, while Rautenbach moved up to fourth.

In the quads, Chilean Giovanni Enrico beat Frenchman Simon Vitse and overall leader, Chilean Ignacio Casale to move into second overall, while Russians overall leader Andrey Karginov, Dimitry Sotnikov and Anton Shibalov made it a Kamaz-1-2-3 in the trucks.

Monday sees Dakar Day taking on a 477km loop around Wadi Al Dawasir. This daily Dakar Report is brought to you by Motorsport Media courtesy of TreasuryOne Motorsport and Red-Lined Motoring Adventures.