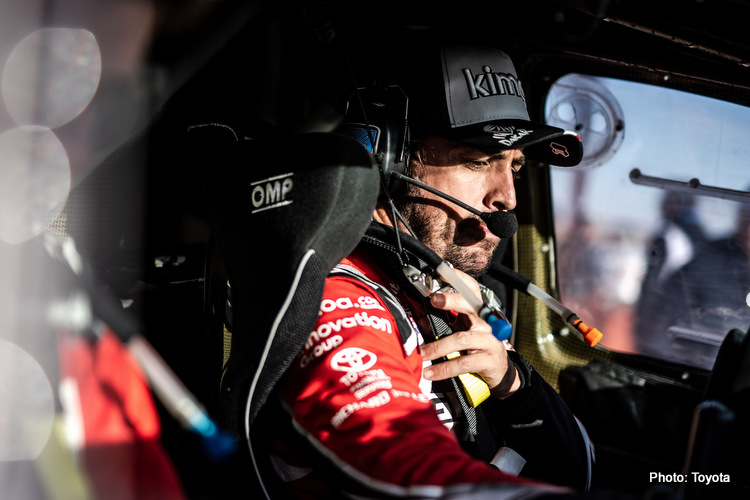 Fernando Alonso looks back on his first six days tackling the Dakar Rally – the world’s toughest motorsport event – confident that he is improving with every outing while he recovers admirably from a day two setback that cost him nearly three hours in the Saudi Arabian desert.

Nevertheless, the Dakar rookie, who is sharing a Gazoo Racing Toyota with off-road legend Marc Coma in the co-drivers seat, has since the incident been on a charge from 63rd climbing up to 16th at the halfway mark, albeit 3.08 hours behind the leader Carlos Sainz senior.

On Friday, ahead of the rest day, he finished sixth, 7.56 minutes behind stage winner Stephane Peterhansel – notably only four minutes adrift of the best placed Toyota Gazoo Racing Entry of defending champion Nasser Al Attiyah at the end of the gruelling 830km stage.

Ahead of the rest day, Alonso told reporters, “Today has gone well again, with good feelings and good rhythm. We were fast again and in the top six.

“Removing the three cars in front [trio of Minis] which are in another league, being the third-best of the Toyotas has been a nice surprise. We had no problems, no punctures or anything. This rest stage comes at a good time.

“As I said in the first few days, visibility is essential. If it’s good, you are always constant and in rhythm with the leaders, but if you fall too far behind and there is dust there are some ‘waypoints’ in which you have to lift a lot

“It’s all new to me, at this level you have different challenges, such as the behaviour of the car at the beginning and then at the end, you go out with more than 400 litres of gasoline and you end up with 30 or 40, so there is a huge difference.

“You drive on sandy terrain, on gravel, on stones, on asphalt … so the level of grip is very unstable and you have to adapt to every kilometre. Visibility… There have been six stages in which we have passed a bit of everything and each of these challenges is new to me, but I try to learn as quickly as possible.

“In 500 km there are many things that happen and not always obvious. I am glad to have had four good days after the problem we had. In general, good pace, confident and gradually improving.

After the second day’s broken wheel mishap, which cost Alonso nearly three hours, it has been all upwardly mobile for the #310 Toyota as they bounced back impressively, “I don’t know why but I gound a better rhythm in the dunes.

“Marc, with his experience in the dunes, is always advising me, he also understands how the race is evolving, which are the dunes in which you have to slow down or where you have to climb a little more.

“And on the stones, the Toyotas have had many problems this first week, we have punctured two or three wheels each day, and that has been a very big penalty especially if you drop down the order.”

Meanwhile, at the sharp end, his good friend and fellow Spaniard Carlos Sainz leads in a Mini at the halfway mark, seven minutes ahead of Alonso’s Gazoo Racing teammate Nasser Al Attiyah in a Toyota.

“Spectacular, but there is no surprise in that regard,” remarked Alonso of Sainz’s run. “We know that Carlos is one of the best and I am very happy that he is leading. Half the race remains but he seems to have everything in hand.”

As for the remainder of the rally and his own chances, he said, “We will see how hard the second week will be. The Dakar is normally unpredictable but at the moment, in this one, nothing is really happening among the top six.

“If things start to happen during the second week and we continue at this rate, we could quickly recover two or three positions in one stage and get into the top three, but if nothing happens at the front it is difficult,” Alonso added.