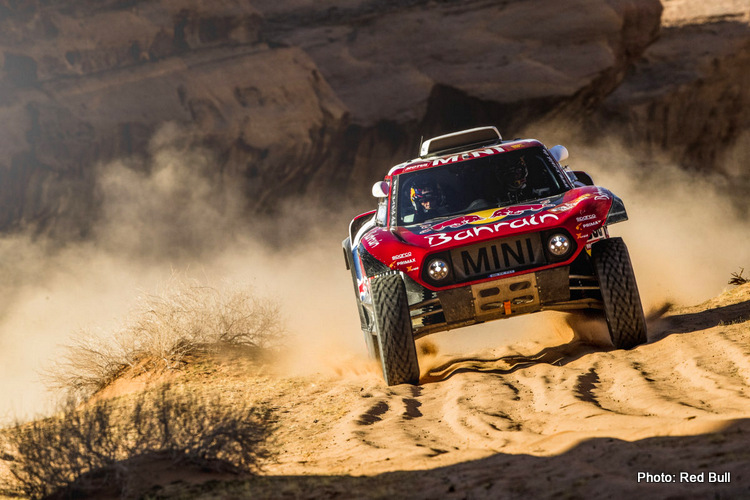 Dakar 2020 reached its halfway point as the epic race stormed into Saudi Arabian capital Riyadh Friday evening, ahead of the traditional rest day on Saturday as Carlos Sainz followed Mini teammate Stephane Peterhansel home to consolidate his overall car lead and Ricky Brabec extended his overall bike lead with another stage win on his Honda.

Fernando Alonso, in a Toyota Gazoo Racing entry continued to impress after his early setback, ending the stage sixth, 7.56 minutes adrift of stage winner Peterhansel and is now 16th in the standings – at one point he was down to 63rd.

Peterhansel said at the end of the day, “Today was a long stage, 477 km, so it’s long. It was fast but sometimes we crossed some dunes, so it was slow, fast, slow, fast… But the biggest problem for me is that with these high speeds you need to be really concentrated a lot. You are not physically tired but it’s more mentally tiring. When we are at really high speed we need to be really focused.”

Overall, Sainz extended his lead over Attiyah to over seven minutes, of which three of those are courtesy of Al Attiyah’s Day 3 blocking penalty — something that could well become a major factor as this year’s race grinds on.

Sainz summed up ahead of the rest day, “I don’t know what is happening. Probably I lost a little bit of time on the last part. Today I think opening the road again wasn’t easy so I’m happy to arrive here in this position. Some parts were very fast, there were some dunes, some crossing of dunes, fast crossing of dunes, with a little bit of off-piste sometimes and then sometimes sandy tracks. It was difficult. I need the rest day now.”

Dakar 2020 started with unknown Lithuanian Zala taking a shock opening stage win in his Mini, before de Villiers took day two in that historical SA double victory with biker Branch. Since then however, it has been all about the Minis with Sainz and Peterhansel sharing out the wins day by day.

On to two wheels Californian Brabec took his second Dakar stage win to extend his overall lead to 20 minutes over Chilean Husqvarna rider Pablo Quintanilla after former bridesmaid, Aussie Toby Price lost 16 minutes on the day to slip back to third Behind Quintanilla.

Brabec beat Honda teammate Joan Barreda Bort by a minute and a half in the race to Riyadh with Austrian KTM star Matthias Walkner fourth from Quintanilla, Argentine Luciano Benavides (KTM) and Chilean Jose Ignacio Conrejo Flormino on another Honda.

The Honda riders will however not be too comfortable following the re-emergence of that old Honda Dakar bugbear of broken engines that has cost it the last two overall wins following Kevin Benavides’ engine failure today. Brabec now leads Quintanilla by 20 minutes overall as Price slipped back to third from Flormino, Barreda and Walkner.

Looking back at the first week, Price took the opening day before unknown Botswana rider Ross Branch stole day 2 and then Brabec took day 3. Cornejo Flormino took Wednesday’s stage, but only after Brit Sam Sunderland was docked 3 minutes for speeding before the Aussie crashed out the following day when Price won again and then Brabec took Friday’s stage.

Botswana’s new Dakar star Ross Branch has had an eventful event, winning day 2 out of the blue and then crashing and hurting his shoulder on Tuesday before bounding back with a splendid third on Thursday. Ross then suffered that broken wheel on Friday to lose over two hours as he coaxed his KTM to the finish

On the quad race, Frenchman Simon Vitse and Alex Giroud put one over overall leader, Chilean Ignacio Casale to take the day, while Russians Andrey Karginov and Anton Shibalov made it a Kamaz-1-2 over Belarusian Siahrei Viazovich (MAZ) in the trucks as veteran Karginov consolidated his overall lead in the behemoth class.

Dakar now enjoys its traditional midway rest day in Riyadh before it is back to racing for the second half sparrows Sunday morning en route to Wadi Al Dawasir on the longest stage of the race at over 546km.

This daily Dakar Report is brought to you by Motorsport Media courtesy of TreasuryOne Motorsport and Red-Lined Motoring Adventures.