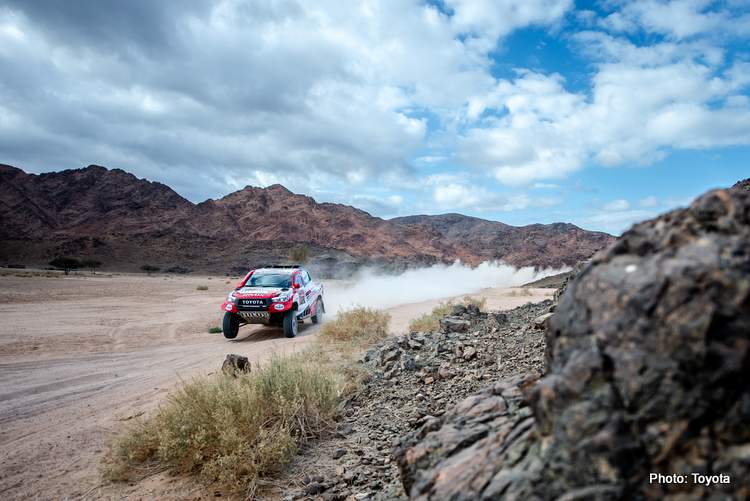 Dakar 2020 delivered perhaps its least controversial day yet as overall car and bike leaders Carlos Sainz (cars) and Ricky Brabec (bikes) consolidated their overall leads with Sainz and Toby Price each taking stage wins on a sandy and grassy 353km run to Ha’il on Wednesday, a day where punctures cursed many competitors.

It was another solid day for double, Formula 1 World Champion Fernando Alonso, whose recovery from the two-hour delay on the second day has been impressive.

The Toyota Gazoo Racing driver finished seventh on the day, 12 minutes behind the leader but less than a minute than more experienced teammate Giniel de Villiers in the sister car. Alonso is now 18th overall.

Good day for us. 2 punctures & some difficulties, but perfect navigation from Marc and better terrain for our Toyoya pic.twitter.com/IWothI1SPE

Overall leader and double WRC and twice Dakar champion, Spaniard Sainz Senior (Mini) extended his advantage with another stage win on Thursday as he fended off closet challenger on the day and in the main category, 2019 winner Nasser Al Attiyah and his Gazoo Racing Toyota Hilux.

Sainz finished 2:56  minutes ahead of the Qatari and said afterwards, “We gained three minutes and pushed really hard at the end. I’m very happy because the car is working well. I had a flat tyre at the start of the special, but I managed to make up the time. I’m doing the best I can, but tomorrow when we open the route, maybe it will be completely different.”

Stephane Peterhansel was third in the second Mini buggy with local hero Yazeed Al Rajhi (Hilux) fourth from Argentine Orlando Terranova (Mini) in a top 5 for the day that perfectly reflects the overall standings in the car class.

Peterhansel summed up his day, “It was a completely different kind of stage today. For us it was not really perfect because we had two punctures. One at the beginning on a rock, but also one slow puncture on the dunes. I don’t know why, maybe just a small piece of bush.

“So we had to stop two times and the second time Carlos overtook me and I tried to follow him on the dunes and the camel grass, but he was really fast,” added France’s Mr Dakar.

Peterhansel’s multiple victories in the Dakar have come seven times in a car and six times on a motorbike, and he likened the final run-in to this stage as being on two wheels.

“Carlos pushed a lot and I was really at my limit to stay within reach of him. After that, we overtook Nasser and took three minutes from him before finishing all three cars together, like a final in motocross,” he added.

South Africa’s Giniel de Villiers came home sixth ahead of Alonso in two more SA-built Hiluxes, while French driver Mattieu Serradori had a tougher day then usual to bring the Corvette-powered Century buggy home in tenth, enough to keep de Villiers behind him in seventh overall.

Botswana’s latest Dakar hero, Ross Branch was once again the first privateer home in seventh after a steady day on his KTM. Kirsten Landman was the next Southern African rider home in 70th with fellow SA lady racer Taye Perry 11 minutes behind her in 74th, no assistance rider Stuart Gregory 86th and Zimbabwe’s Graeme Sharp 92nd.

Overall Brabec leads Price by 9 minutes with Benavides and Quintanilla next up, while Monday’s winner Branch made good progress to move up four more places to 14th after hos painful tumble on Tuesday. One of the race favourites, Sam Sunderland crashed out on Thursday to join fellow bikers Xavier de Soultrait, Ivan Jakeš and Daniel Albero Puig, all of whom withdrew on Wednesday.

Dakar 2020 is only just starting to warm up — Friday ends the first week of Dakar with a 477km race up to Saudi capital Riyadh for the the rest on Saturday.

This daily Dakar Report is brought to you by Motorsport Media courtesy of TreasuryOne Motorsport and Red-Lined Motoring Adventures.